The 18-year-old was treated locally before being flown to hospital in London, Sussex Police said. 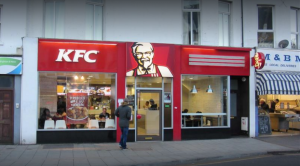 The KFC in London Road, Brighton

He is believed to have been stabbed during a fight outside the KFC, with the police being called shortly before 8.30pm.

Anyone who saw what happened is asked to phone Sussex Police on 101 or email 101@sussex.pnn.police.uk.

Alternatively witnesses can call the independent charity Crimestoppers anonymously on 0800 555111 or visit www.crimestoppers-uk.org.