Headmaster James Kilmartin was particularly pleased given the government’s A-level reforms which have been intended to make the qualification more rigorous.

Newman College – Cardinal Newman’s sixth form centre – reported an overall pass rate of 97 per cent and said that 73 per cent of students were awarded A* to C grades – up 3 percentage points on last year.

And 50 per cent of students were awarded A* to B grades – also up 3 percentage points on last year. 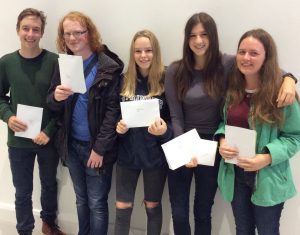 Dr Kilmartin said “The students are a credit to themselves, their families and the school.

“They have worked hard to achieve these results and I know that they will want to join me in thanking their teachers for the support and advice which has made a big contribution to their success.

“We are proud of each and every one of our students. As our sixth form continues to expand, we look forward to similar success in years to come.