A woman died after being hit by a car in Old Shoreham Road, Hove, this afternoon (Saturday 2 September).

The 86-year-old was struck by a black Toyota Celica at lunchtime and died at the scene. 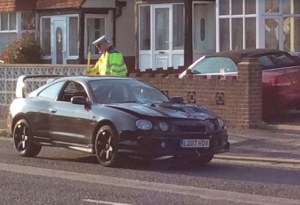 The 39-year-old driver of the Toyota was arrested.

The accident appeared to have happened on the eastbound side of the road just past the corner of Weald Avenue and opposite the top of Aldrington Avenue.

The road was closed for more than five hours for almost half a mile between the bottom of Holmes Avenue and the traffic light crossroads at Nevill Road and Sackville Road. 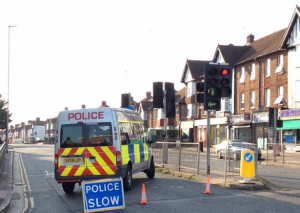 One shopkeeper, who declined to be named, said that while he had enormous sympathy for the victim of the crash, several businesses had lost an afternoon’s trade because of the unnecessarily long stretch of road closed.

The car park of Homebase and the new Barker and Stonehouse car park were both deserted despite being some way from the crash scene.

Sussex Police said: “Police are investigating a road traffic accident which occurred at 1.14pm on the A270 Old Shoreham Road in Hove when an 86-year-old female was in collision with a black Toyota car. 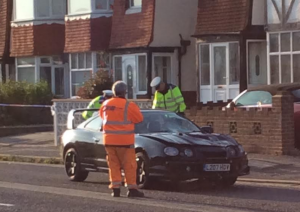 “The female sustained serious injuries and was sadly pronounced dead at the scene.

“Her next of kin have been made aware.

“The 39-year-old driver of the Celica has been arrested for offences and police are appealing for witnesses.”