A Brighton church is to be demolished to make way for 24 homes, after planning permission was granted this afternoon (Wednesday 11 October).

The Montpelier Place Baptist Tabernacle, which was built in the 1960s, closed five years ago, has fallen into disrepair and been vandalised after being squatted more than once. 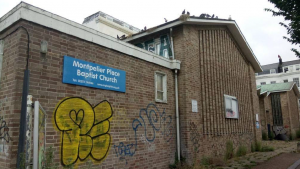 Planning permission has been given for a three-storey block of five affordable flats, a terrace of five four-storey town houses and a five-storey block containing 14 flats.

Housing officials initially objected to the proposal because it included too few affordable homes. The district valuer, however, accepted that five of the homes – or 20 per cent – was acceptable. The policy locally is for schemes of this size to include 40 per cent.

More than 50 objectors wrote to Brighton and Hove City Council which also received a petition containing 50 signatures. Six people wrote in to support the scheme.

One objector, planning consultant David Hutchison, addressed the council’s Planning Committee on behalf of the Brighton and Hove Islamic Cultural Centre, which is currently based at Al-Medinah Mosque, in Bedford Place, Brighton.

Mr Hutchison said that the group hoped to build an Islamic cultural centre on the site which would include space for a mosque.

He said that the site had been in continuous religious use for over 200 years. It was for many years the site of the Emanuel Reformed Episcopal Church.

The previous owner, the Grace Baptist Trust Corporation, sold the building earlier this year for just over £3 million for a high-density residential redevelopment.

Planners were told that the corporation had not offered it for sale for continued community use at any time since it was vacated as a Baptist tabernacle.

But the council’s planning policy aimed to prevent the loss of community space, he said, including places of worship.

The plans presented to the Planning Committee, at Hove Town Hall, this afternoon included 115 square metres of space for community use compared – much less than previously.

But Richard Mason, a partner for the architects Crowther Associates, said that planning policy allowed for a scheme to include a reduced quantity of community space when it resulted in increased quality.

He accepted that no tenant for the community space had yet been found but said that the plans proposed “a sensitive redevelopment of the site”.

Mr Mason said: “The site has recently been squatted, vandalised and left in a semi-derelict state”

He added that the church that sold the site would use the proceeds to support other churches, including upgrading buildings.

The scheme would, he said, provide 19 open market and five affordable units as well as seven car parking and 42 bike parking spaces on the site. It covers just over a third of an acre (0.14 hectares).

The conditions for granting permission include financial contributions from the developer totalling £168,000.

The money would be used to support education, employment, transport and recreation, open space and indoor sports provision locally.

The applicant, Mortar Nova Developments, of Ditchling Road, Brighton, hope to start work as soon as possible and finish building the homes within 18 months.

Planning Committee members approved the scheme by eight votes to one.