A man who raped six girls – one as young as 12 –  but told police they were “silly girls  who need sorting out” was jailed for 18 years this afternoon. 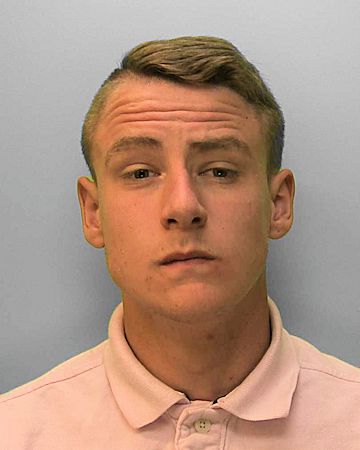 Lewes Harby, 20, first began his series of sex attacks when he repeatedly raped a 12-year-old girl, sometimes as she wore her school uniform, at his mother’s house.

Even after he was arrested for these attacks he went on to assault five more girls – finally pinning down a 13-year-old girl to his bed and raping her as she begged him to stop.

Today at Brighton Crown Court, Her Honour Judge Waddicor sentenced him to 18 years in prison despite his guilty plea because of the dangerous nature of his offending. Of these, 12 will be spent in custody and six on extended licence.

Prosecuting, Kate Blumgart said: “Lewes Harby has exhibited behaviour of a sexual predator towards victims much younger than himself.

“He targeted young girls with difficult home backgrounds and inveigled himself into their company.”

She said that Harby had been arrested for the attacks over a period of time, and on the last occasion he told police that his victims were “silly girls who need sorting out”.

In many of the cases, he contacted the girls via Snapchat or other social media, sometimes giving the girls phones so he could send them messages.

Most of the attacks happened at his home, where he lived with his mother Anthea Dickson, which was described by one of the victims as a place where drug taking and dealing happened.

And he met most of the victims through another young girl – who he also used as a go between to send messages to them, one one occasion asking her to persuade one of the girls to run away with him.

Miss Blumgart also read out victim statements made by or on behalf of the six girls Harby abused.

All spoke of how their lives had been turned upside down since meeting Harby, with several dropping out of school, lashing out at their families or being taken into care.

Two said that it was only when they read media reports about Harby’s conviction that they realised he had been abusing them.

And several said they had been left anxious and afraid to be alone as a result of the attacks.

In mitigation, Steve Wedd said: “He has messed up his own life and the girls lives. What he did was serious and bad but when he was arrested he didn’t realise how serious or how bad.

“He asks me to express that he is sorry to each one of them.

“He says I will do my time and I hope to come out reformed.”

Mr Webb asked that a life sentence was not imposed so that Harby had a “light at the end of the tunnel” when seeking rehabilitation.

Speaking outside court, the youngest girl’s mother said: “She was absconding every day and every night, and nine times out of ten to Lewes Harby’s house. There were other men involved, known to the police.

“She would abscond three times in a night. The police were awesome, but they don’t have the manpower to be constantly dragging her home.

“She was once found on the beach out of it and kissing a man who was known to the police for grooming.

“One night in May, she came to my house and changed quickly saying she had got her tights wet on the way over. The next day her carer noticed a massive lovebite on her chest – at this point she was still just 12 years old.

“The carer called me, and I told her to find her underwear, and we gave that and her tights to the police, and they were able to find Harby’s DNA on it.

“People have this image of paedophiles being dirty old men in anoraks. But men aged 17-30 are the ones grooming these girls.

“The police’s safeguarding investigations unit is a very busy team. Detective Constable Rich Valder-Davis has worked so hard and relentlessly to get Lewes Harby. I have nothing but praise for this man.

“He didn’t give up he was determined. He never brushed me off and thought I was hysterical or deflecting, despite what social services had said to him.

“A lot of these girls you see missing are being raped. I was approached by someone who lives near me who heard me talking about child protection on the phone, and wanted advice because she thinks her daughter is being groomed.

“I was shouting from the rooftops about this and prodding away, and my neighbour said once word gets out, the others will follow. And once they knew Lewes Harby had been arrested for my daughter’s rape, another five victims came forward.

“It was really important for me that it goes to court because it’s important that my daughter sees that it’s justice for her, and other people.

“Having a judge say that that person has done wrong to you. Everyone can tell her that, but to have it in a court and publicly is really important.”

Detective Constable Rich Valder-Davis, of the Brighton Safeguarding Investigations Unit, who investigated the many claims against Harby, was in court.

An NSPCC spokesperson said: “Harby’s young victims have shown tremendous courage in coming forward and speaking out about their horrific ordeals.

“He purposefully used the anonymity of an online platform to carry out this abuse and we hope his victims are receiving all necessary support to overcome what happened to them.

“This case shows just how vital it is for parents and others talk to children about how to stay safe online.”