A motion to warn Aung San Suu Kyi she could be stripped of the freedom of Brighton and Hove if she does not speak out against “textbook ethnic cleansing” in Myanmar has been withdrawn after the cross-party consensus collapsed. 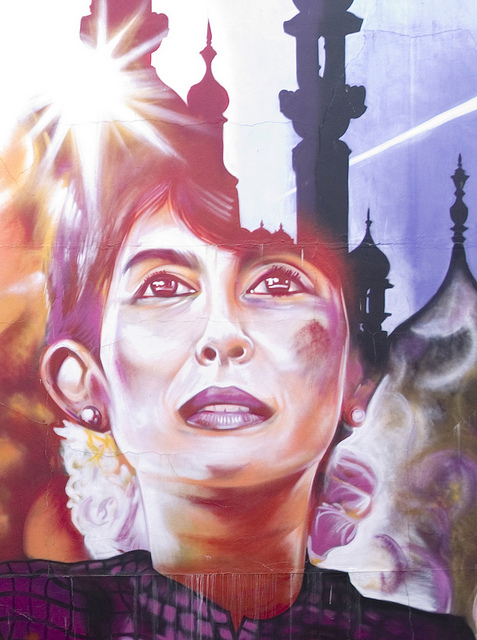 The motion, which was due to be discussed this afternoon at a full council meeting, called on Miss Suu Kyi, who became State Counsellor of Myanmar last year, to speak out or take action to stop Government troops attacking Rohingya Muslims, or the city council will consider withdrawing the honour.

Miss Suu Kyi was made a freewoman of the city in 2011, when she was guest director of the Brighton Festival, the year after she was finally released from house arrest by the then Burmese government.

However, after the Greens tabled an amendment calling on her to instead be simply stripped of the title, the motion was withdrawn by leader of the council Warren Morgan.

Cllr Morgan said: “Over the past two months I have been negotiating a cross party statement on the situation in Myanmar and whether the city should remove the Freedom of the City it awarded to Aung San Suu Kyi in 2011.

“It was not possible to secure the necessary two thirds majority to do so, but I was able to secure unanimous backing for a cross-party motion and statement on the treatment of the Rohingya Muslims.

“However a last-minute amendment from the Greens has led to the Conservatives withdrawing their support, so the motion is being withdrawn pending further discussions with the two opposition groups.

“On some issues party advantage has to take a back seat in order that the city council, with the political makeup it has, can speak with one voice. I’m disappointed that in this case this has not been possible, as I know we all want the appalling treatment of the Rohingya in Myanmar to stop now.”

However, Conservative group leader Cllr Tony Janio said Cllr Morgan’s account of discussions did not tally with his understanding.

He said: “At no stage have the Conservatives even suggested withdrawing the motion.

“I emailed the Greens saying I was disappointed they had proposed the amendment, but that I hoped Warren would hold the line and carry on with the cross-party motion.

“The following day Warren Morgan pulled it, blaming the Conservatives which is absolutely astonishing.

“Nobody has ever raised the issue of Aung San Suu Kyi on the doorstep.

“Our position is complicated, but it’s all about who holds the power there. The last thing we want to do is to be undermining Aung San Suu Kyi. If the West withdraws support from her, she could end up in the same situation as her father, who was assassinated.

“If Labour and the Greens want to sit down and draft another motion, I would be happy to do that.”

Cllr Pete West, who proposed the amendment, said: “The city will be really disappointed to hear that the leader of the council has chosen to take away the opportunity to express concern about the horrific events in Myanmar.

“With more than 1000 people killed in what the United Nations have labelled ‘textbook ethnic cleansing,’ this was a crucial debate. Greens wanted to take the original motion further and also put the option of swiftly removing the freewoman of the city title forward to full council.

“From the outset Greens have been clear that the council could send a stronger message both to Aung San Suu Kyi and to our resident Muslim population by revoking her freedom of the city status.

“But in an unnecessary development, our views on her status have led to Warren Morgan pulling the plug on the entire course of action, with the chance for debate, including the original cross-Party actions, now lost.”