Who is Ulrich Schnauss and what is he doing in Brighton? 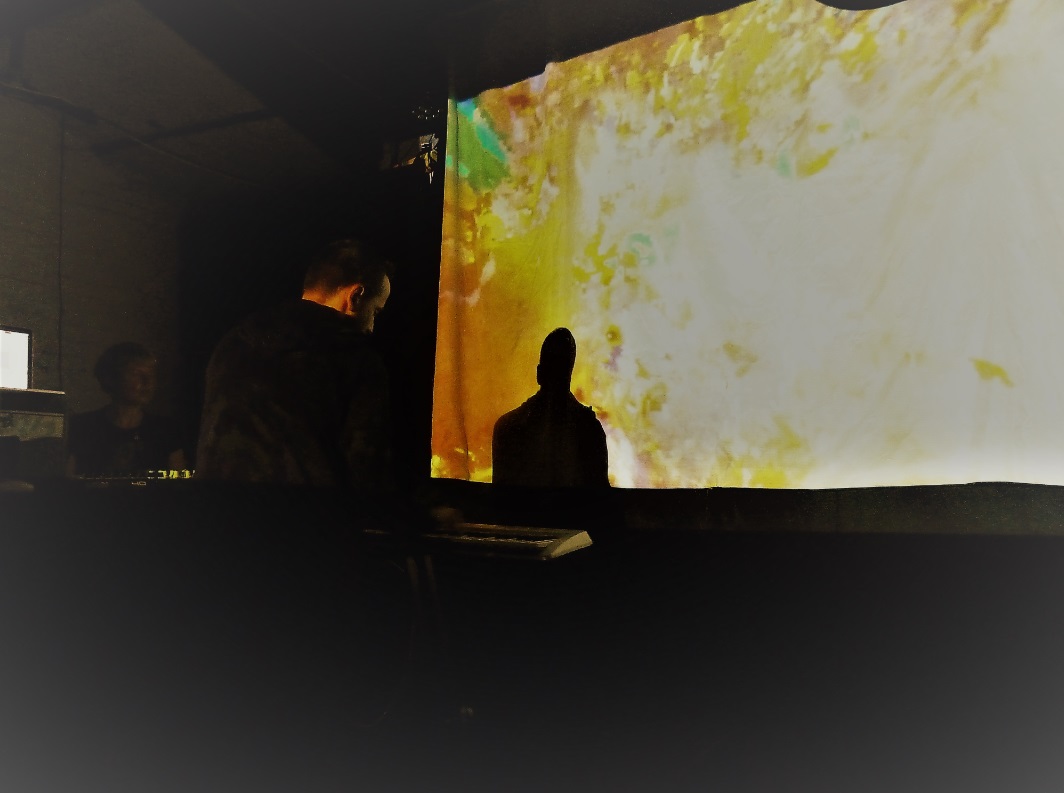 It’s not often that I discover an artist that works flat out in their field of music and yet still appears to stay under the radar, but I have to say that Ulrich Schnauss is indeed one of these acts.

Ulrich was born in the major shipbuilding centre of Kiel in northern Germany at the heady height of punk in 1977. He became interested in music but with little opportunity to witness his wide ranging musical idols, such as Tangerine Dream, My Bloody Valentine and Slowdive, he therefore decided to relocate to the south-east, namely Berlin, at the end of his teens in order to absorb the atmosphere.

Berlin has long been a musical hotspot and an inspirational place for many music artists, just take a look at Bowie’s Berlin Trilogy, and so Ulrich was in the right place at the right time. Thus he became an electronic musician and producer of some note. 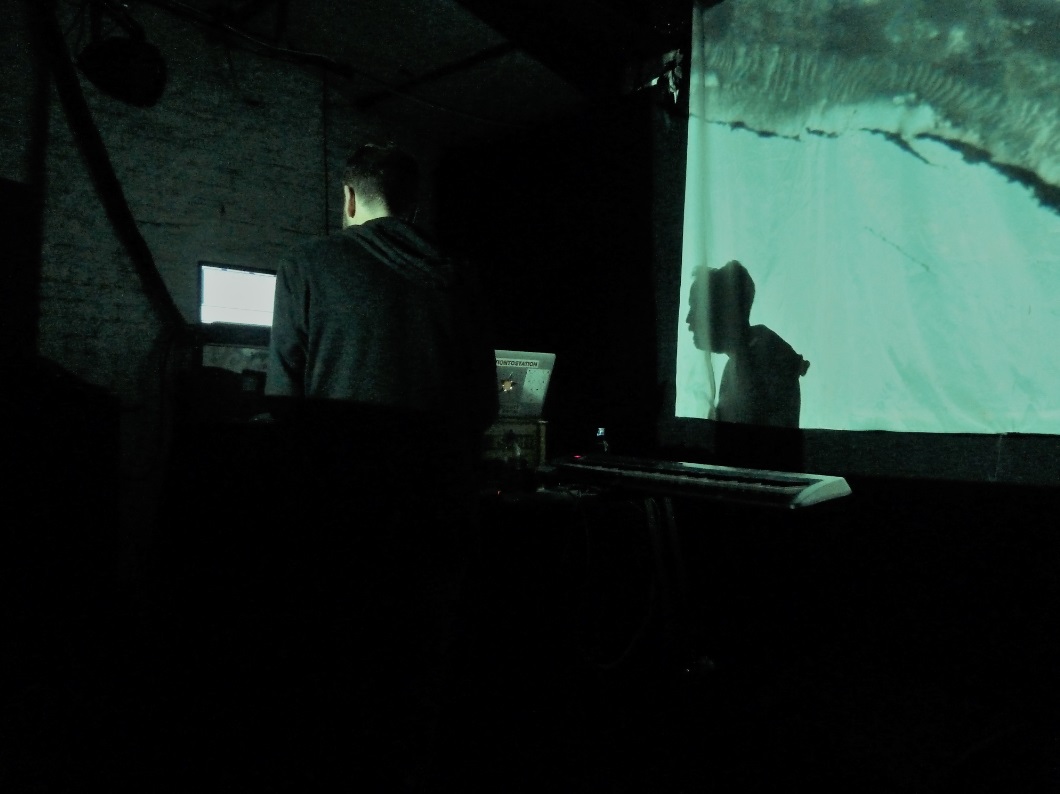 He began releasing his electronic/drum material under pseudonyms Police In Cars With Headphones, Ethereal 77 and View To The Future and soon came to the attention of the Berlin electronica label City Centre Offices (CCO) who released his debut album ‘Far Away Trains Passing By’ under his own name in 2001. Ulrich’s second album, ‘A Strangely Isolated Place’ came two years later, followed by various remix projects for other artists.

Then in 2005 he also became the keyboardist for Manchester indie rock band Longview, who had formed three years earlier. No doubt he might have been drawn to them as the band had not long released a cover version of Depeche Mode’s ‘Stripped’ as a single. Ulrich stayed with Longview for five years but during that time was still releasing his own material.

In 2003 a British dreampop/shoegaze band formed in London called Engineers and they got their inspiration from Brian Eno, The Cocteau Twins and Pink Floyd and Ulrich found that he was a kindred spirit and so joined the Engineers in 2010 of which he is still a member today. 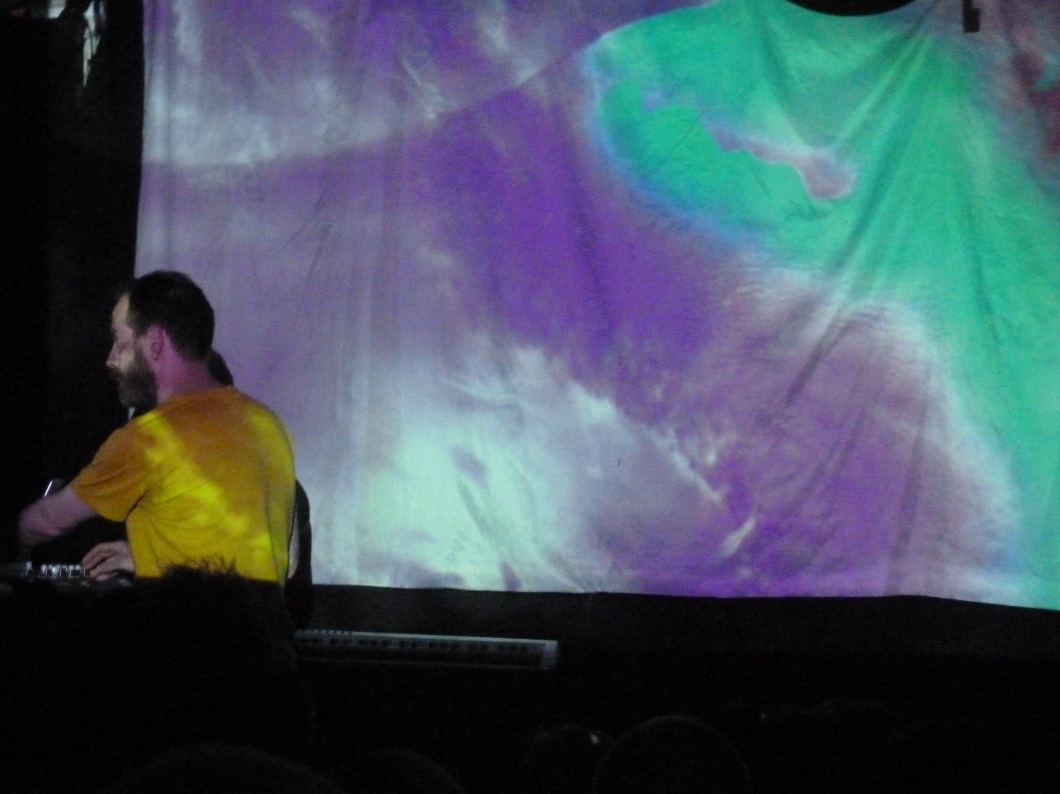 Not one for resting on his laurels, Ulrich then only managed to secure a place as a synth/piano player in one of his hero bands, namely Tangerine Dream. He has been a member since 2014. Not content with this, he has also been involved with remixing tracks for top artists including Depeche Mode, Coldplay, Pet Shop Boys and Bryan Ferry.

So Ulrich sure knows what he is doing music-wise and in fact has performed in Brighton under his name three years ago at Sticky Mike’s Frog Bar. Tonight, the stage was set for an unusual but entertaining performance by at the Green Door Store.

Like many electronic music performers, Ulrich had decided on a back screen with projections, partly because synthesisers and computers I surmise are not the most visual of stage instruments. The musicians being static behind their instruments unlike the visually frenzied jumping about guitar bands can create. And background imagery lends itself well to the sound and mood shifting variation of synthesiser music especially the instrumentals played tonight. 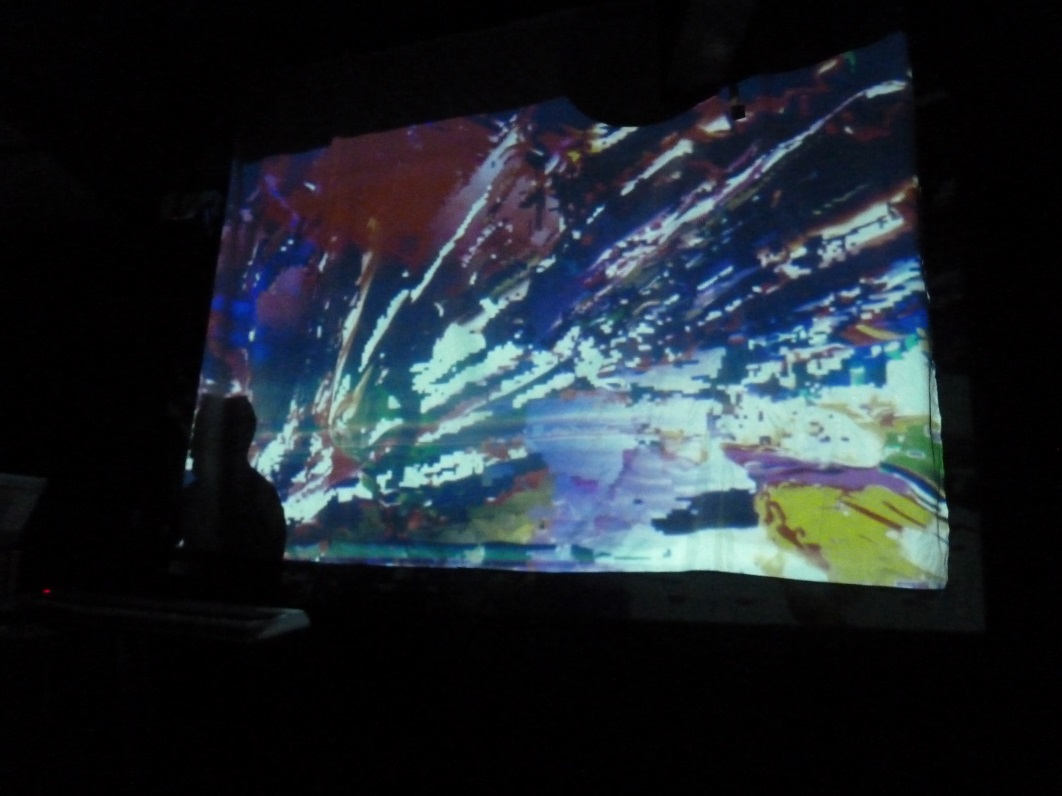 To this end, Schnauss was accompanied on stage by a Russian professional visual artist by the name of Nat Urazmetova. Nat who graduated with a BA (Hons) in Photography from London College of Communication in 2009, was controlling and changing the visuals from her laptop located to the corner of the stage.

She had created the visuals called Crosspoint in response to Schnauss soundscapes. These visuals consist of an array of swirling lurid colours, sometimes cold and bluish or sometimes shades of deep red. They reminded me of psychedelic colours sometimes seen in old 1960’s Roger Corman horror films. Then there were also various urban and space scenes which were tailored to the mood of the music that Schnauss was playing.

Both Schnauss and Urazmetova were mysteriously located to the side of the stage in atmospheric semi darkness. It’s fair to state that neither party were certainly not attention seeking. Nat had five stickers on her laptop, with two of them paying homage to the legendary David Bowie – one displaying ‘Station to Station’ in homage to the famous album and the central sticker being a black star. 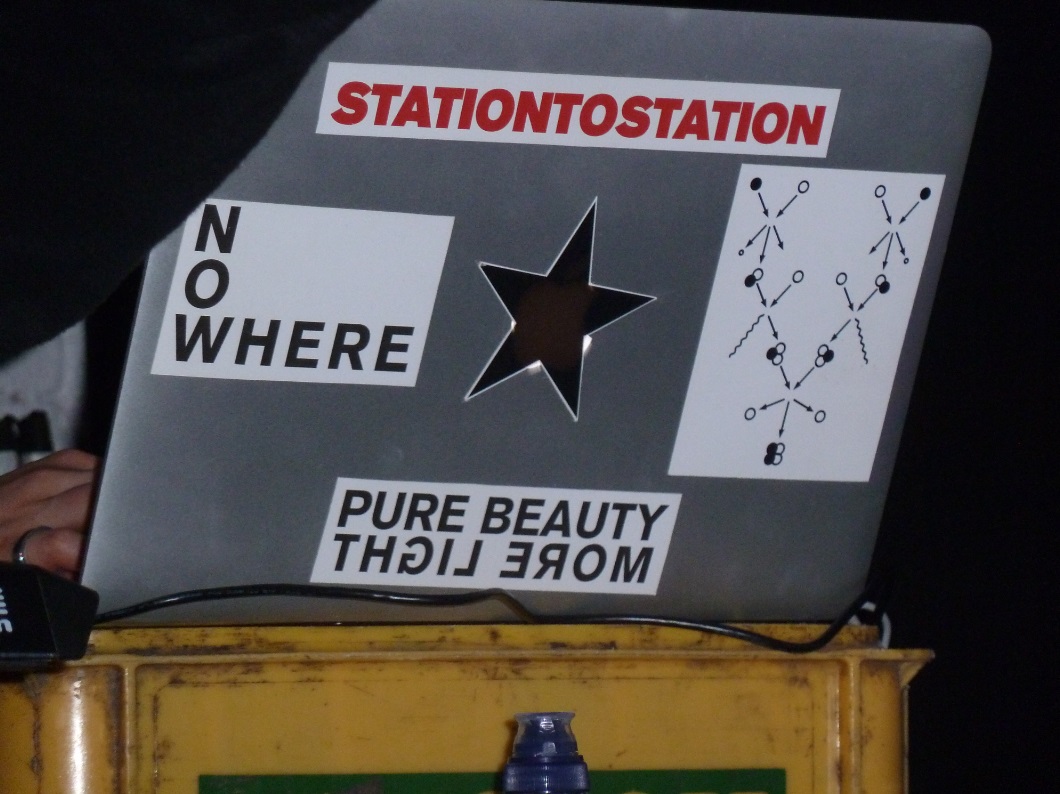 A laptop of some class

A Schnauss performance is unusual in several ways. Firstly, he enters the stage to play briefly on a keyboard whilst not facing the audience but towards the back projection as if the audience wasn’t there. He then moves to his laptop mouse and effects units to the side and spends the rest of the performance manipulating sequences and sound with a software program called Ableton live. This allows him to fade parts in and out, remix and arrange what can be heard. Thus it makes each performance different from his released work across his various solo albums without vocals. After the concert, Ulrich informed me that due to this process, he does not use a concrete track-listing as such. 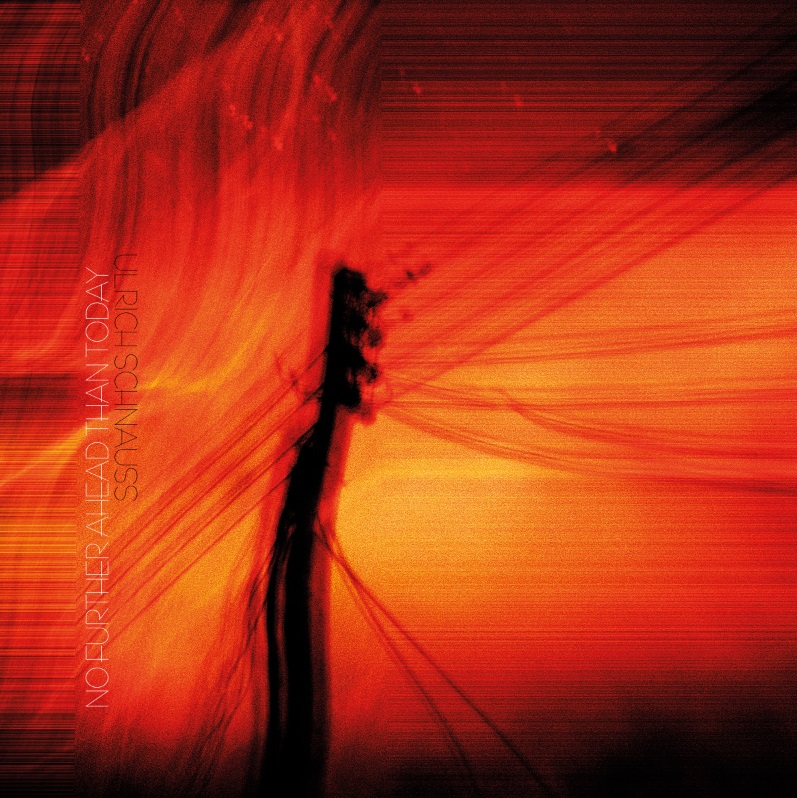 Ulrich’s latest album ‘No Further Ahead Than Today’

Not surprisingly, many tracks tonight sounded to me rather like the multi layered lush keyboard sounds and sequences reminiscent of Tangerine Dream, of which Ulrich is a current member of.

I had the pleasure of seeing them perform on 17th October 1981 at the Brighton Dome – Although the line-up then was Edgar Froese, Chris Franke and Johannes Schmoelling.

Some who balk at pre-programmed music, have to understand that this level of musical complexity needs it on the road. Videos on the net of his studio working, show the enormous amount of equipment he uses to create his music, which practically must remain studio bound.

The sound is full and has surprising twists and turns which he is manipulating. To this end the visuals are constantly changing to adapt. The 90 minutes go by quickly. But I get the impression Schnauss feels awkward on stage by not looking out at the audience. Though he looks very absorbed at what he is doing. Certainly the audience were enthralled and entertained.

That was it for the artists, however the Green Door Store was also hosting a later different concert by artists called AUTOBAHN and CYMBALS, which we have reviewed here: https://www.brightonandhovenews.org/2017/11/11/fun-fun-fun-at-autobahn-in-brighton/