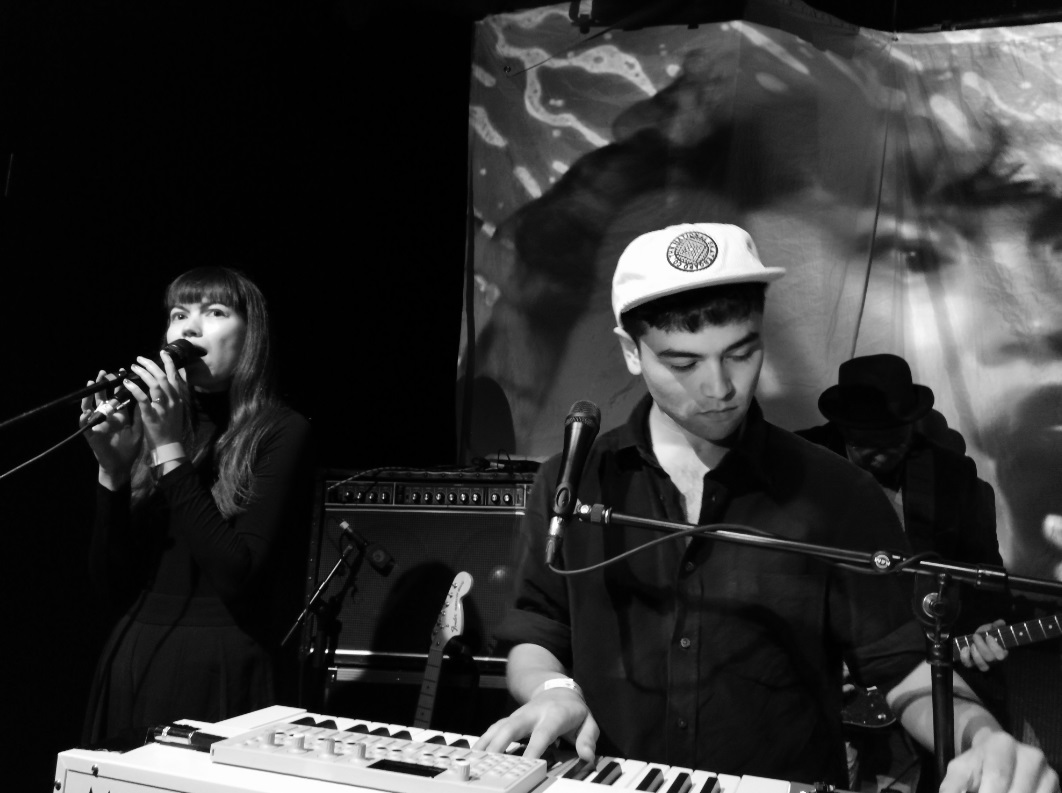 The glorious Rialto Theatre in central Brighton was definitely the place to be tonight (Saturday 18th November) because the Lost Horizons collective were performing live.

Lost Horizons are a rather special collaboration by ex-Cocteau Twins bassist Simon Raymonde (who now resides in Saltdean with his lovely wife Abbey who I have met at Bella Union) and ex-Dif Juz instrumental groups drummer Richie Thomas. It is clear that Raymonde amd Thomas share some kind of telepathic relationship through music and the love of melancholia. This might have something to do with them both being on the legendary 4AD records. 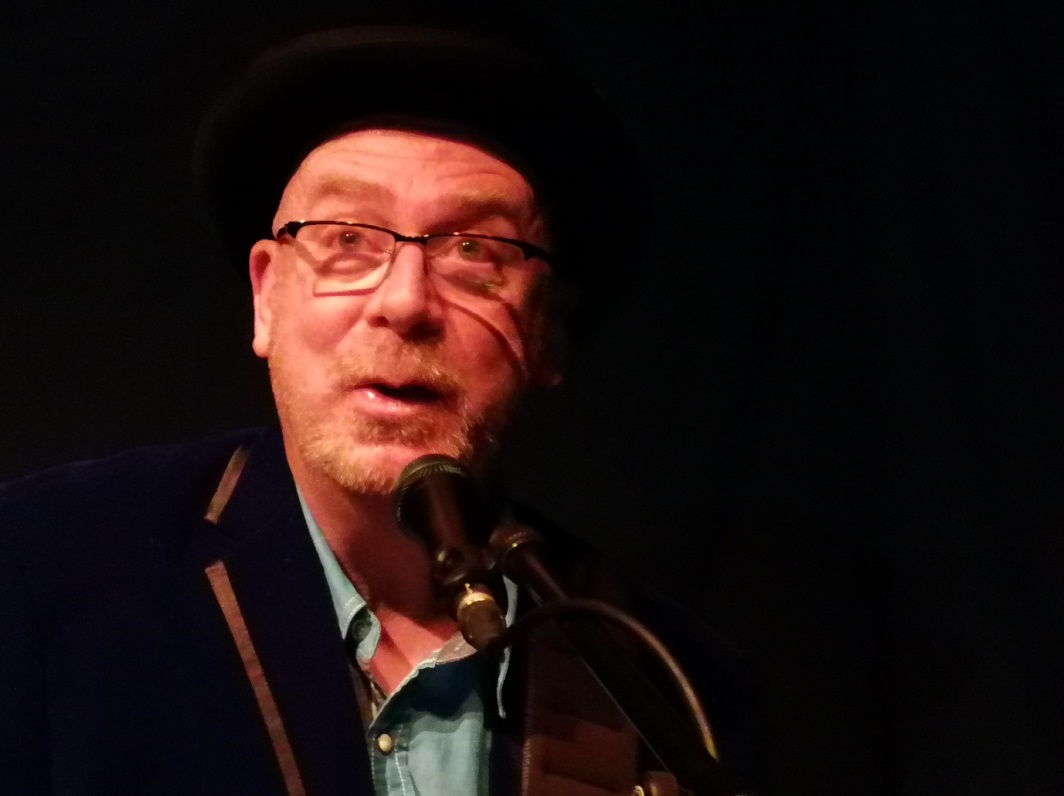 It all came about when the pair booked (just four days) in an east London studio, with Raymonde on piano and Thomas on drums, and a simple plan: “It must feel like fun, never a chore, and it had to be improvised,” Raymonde explains. If it never became a record, it didn’t matter. It was all about recapturing that feeling when you’re 15, making music with friends. “

Raymonde added bass, guitar and occasional electronics, turning improvisation into songs, and a second four-day session was booked – the day that David Bowie suddenly died. “I didn’t know if I could go through with it,” Raymonde says, “Richie was just as upset, but he said, ‘Let’s use that energy, and power through,’ and I’m so glad we did. That energy and excitement is still on the finished record.” 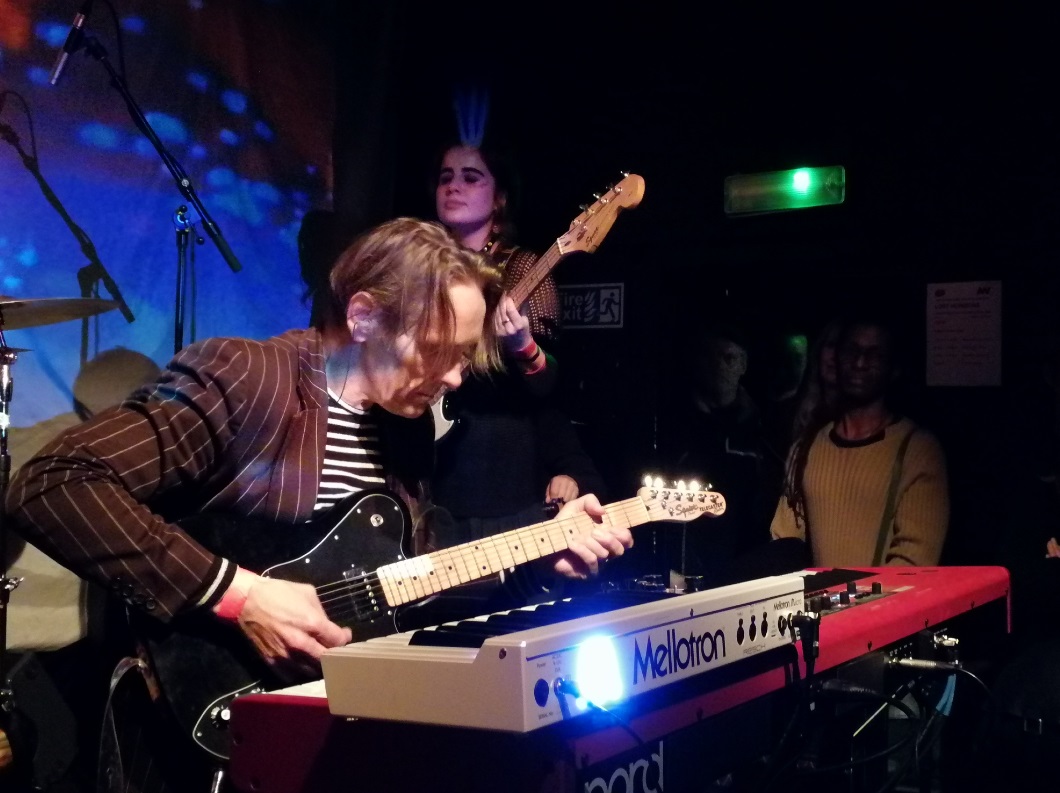 The finished record being their stunning 15 track debut album, ‘Ojalá’ (Spanish for “hopefully” or “God willing”), which came out on 3rd November on Brighton’s Bella Union Records. Thomas: “Better we recorded than watch the news! It became this very positive experience. The music that day had a sensitivity that might have influenced the vocalists. Listening back to the record, it was such an emotional experience for me.” ‘Ojalá’ was made for Raymonde’s and Thomas’s need to make music, and to create something beautiful, and meaningful, in these dark times and indeed they have more than succeeded. 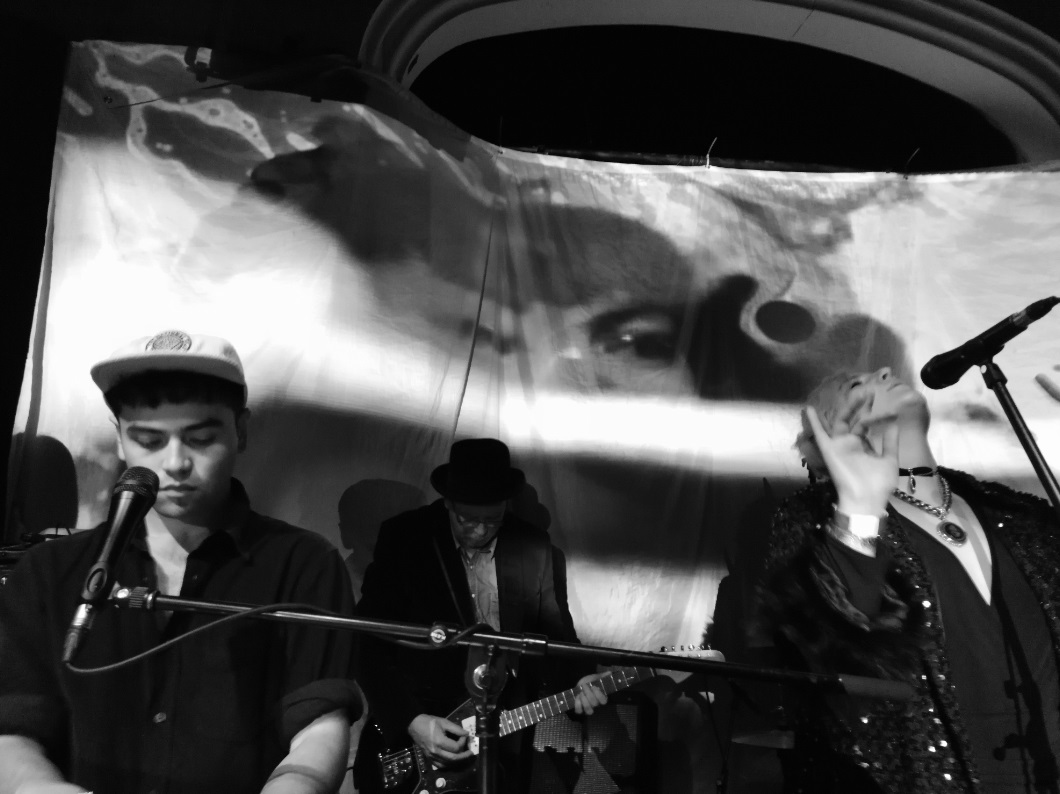 ‘Ojalá’ also incorporates a heady cast of guest singers. Some are signed to Bella Union, such as Marissa Nadler, former Midlake frontman Tim Smith, Cameron Neal (Horse Thief), others are long-time favourites of Raymonde’s (Leila Moss of The Duke Spirit and Ghostpoet), or newer discoveries (Beth Cannon, Ed Riman, Gemma Dunleavy and Phil McDonnell). And then there is the incomparable voice of an angel Karen Peris of The Innocence Mission, one of Raymonde’s most beloved artists, in her first collaboration outside of The Innocent Mission and solo recordings. Co-incidentally, this week The Innocent Mission have released a new EP, which you can purchase here: https://theinnocencemission.bandcamp.com/album/the-snow-on-pi-day 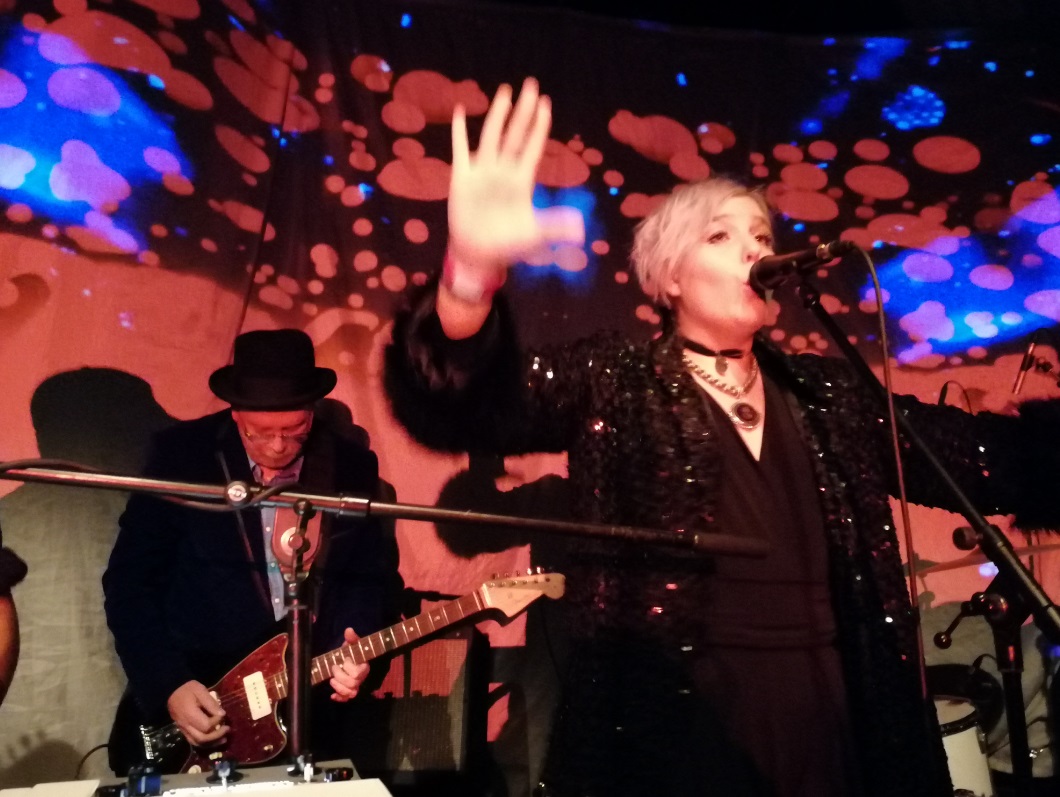 “We live in a time where we need hope more than ever,” Thomas concludes. “And hope’s the last thing you give up on… ‘We live in hope’. And this record has given me a lot of hope. To reconnect with music, and that feeling of innocence that comes from playing music.

Fancy a listening or purchasing the album, then click here: https://bellaunion.greedbag.com/buy/ojal-9/

Support tonight came from Brighton’s very own silky-voiced, slender Rachel Khoo lookalike Dog In The Snow – that’s Helen Ganya Brown to her mates! Her accomplished debut LP ‘Consume Me’ came out on 20th October on the Battle Worldwide label. 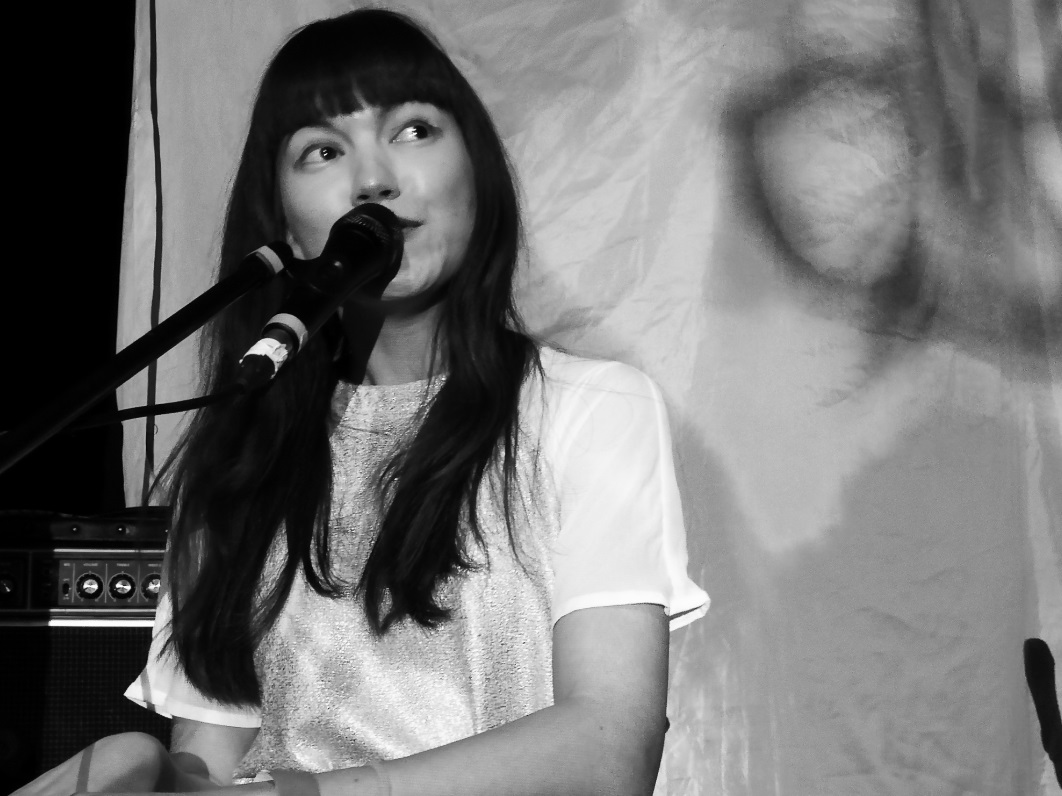 Dog In The Snow live at The Rialto Theatre, Brighton 18th November 2017

Dog In The Snow finds inspiration from her own experience of being mixed race, as in her lyrics to her haunting track ‘Mirror’ and a foreigner to her homelands, whilst exploring self-identity in its culture and ideas.

Tonight, the sound of her seven song half hour set was a pleasant blend of crisp clear captivating vocals combined with warm synth sounds intermingling with guitar and jagged programmed drum beats. The result is an all-consuming world of mixed identities. Helen was in residence to the far left of the stage was bathed in swirling coloured lights and her face projected onto a background. Her penultimate track was ‘Sleepwalkers Woman’ which is a Scott Walker track from his 1984 ‘Climate Of Hunter’ album. The more she played the better her set got and our fave track was her final track and album title ‘Consume Me’. 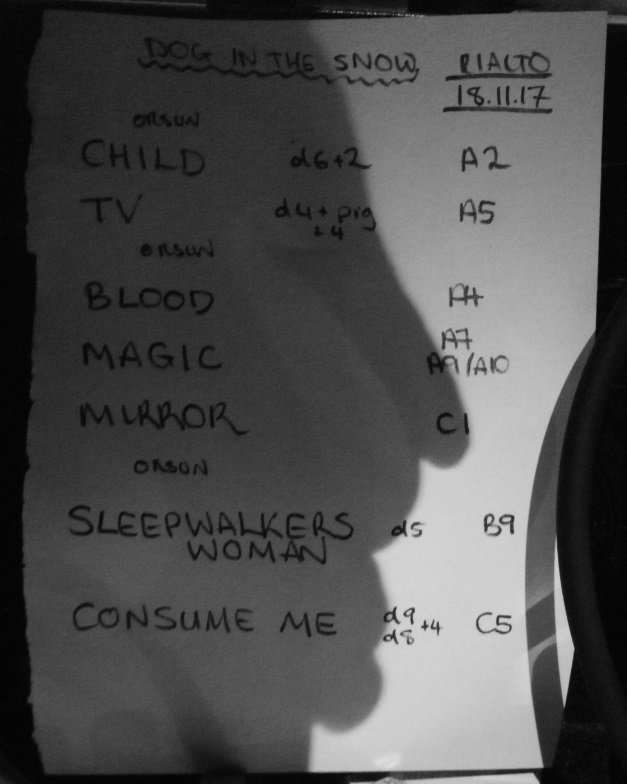 The Dog In The Snow setlist

For more info on Dog In The Snow, visit: http://doginthesnow.tumblr.com/

After a brief trip downstairs for replenishment, it was time to whizz back upstairs for the eleven track Lost Horizons set. In fact all of their songs were culled from their debut 15 song ‘Ojalá’ album. 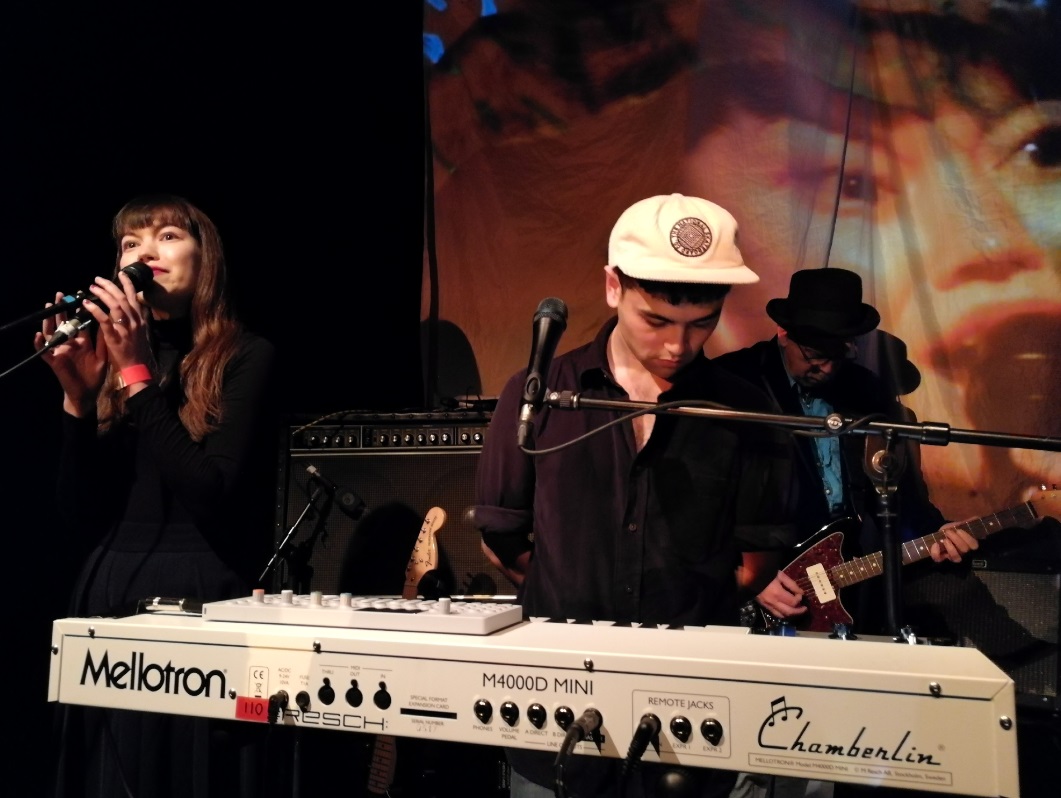 On stage tonight were seven very accomplished artists, who ages ranged I guess from around 20 to about 55 years old. Sounds like a clash of ages and possible musical doesn’t it, but tonight this varied collective surely were one tight unit who were working together for the betterment and love of their music.

Their album has something like 15 guest singers on it and so logistically it was never going to be possible to get everyone together for tonight’s gig and you’d never get them all on the stage. So Dog In The Snow was back on the left hand side of the stage and on vocal and guitar duties. There was another constant lady vocalist by the name of Beth Cannon and a young chap called Hilang Child on occasional vocals, when he wasn’t on the keyboards. There was another keyboardist in the form of Chris Anderson (aka Crayola Lectern) who was seated as in Ron Mael style and finally there was Asya Fairchild on guitar. They too were all bathed in psychedelic lighting, which added to the atmosphere. 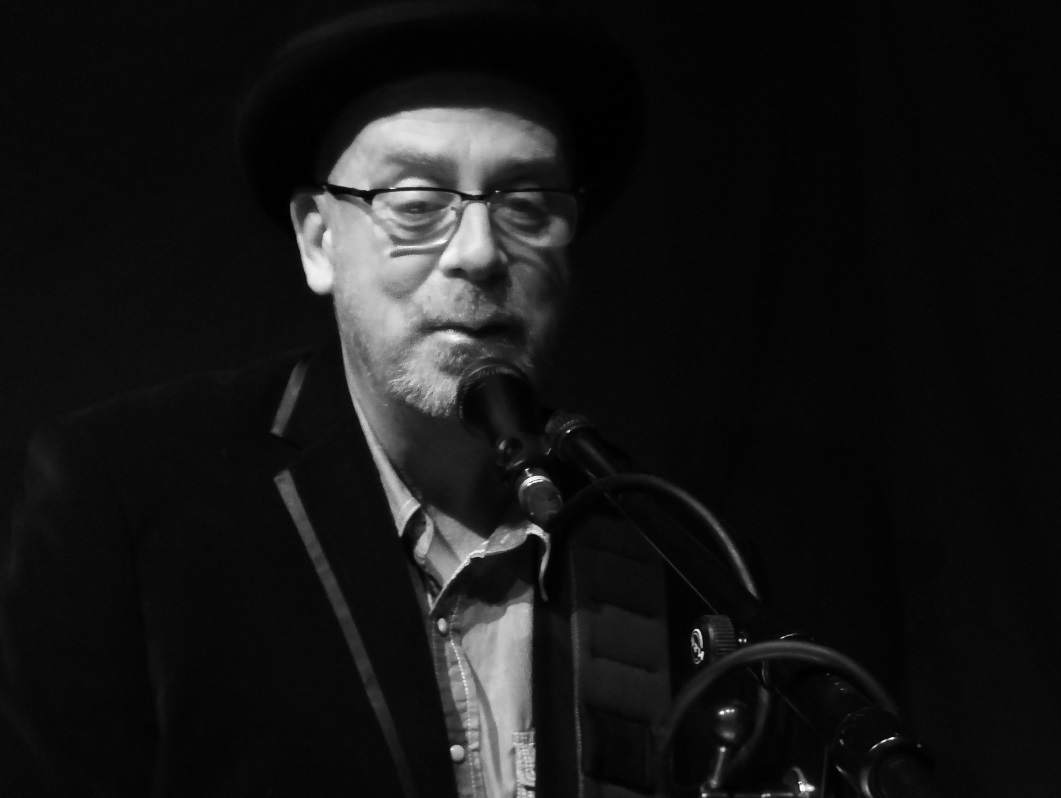 The event was not surprisingly sold out and so all of the sardines present appeared to enjoy the pleasant music on offer and so this assisted with the nerves on stage. Lost Horizons on stage are an understated lot, (with Raymonde and Thomas at the back of the stage) but this I found to be an endearingly warm trait. One could even possibly suggest that some of the contingent felt embarrassed to be up their, but to be honest with the musicianship on offer, they really need not have worried one iota. A resounding success! 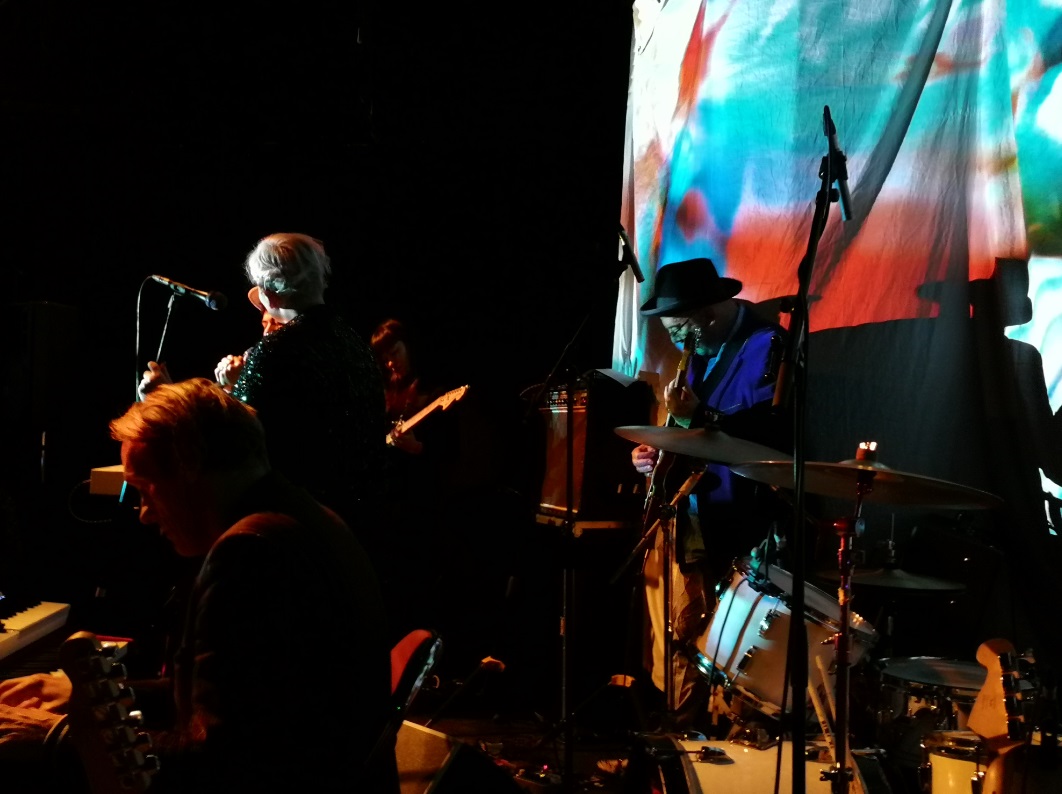 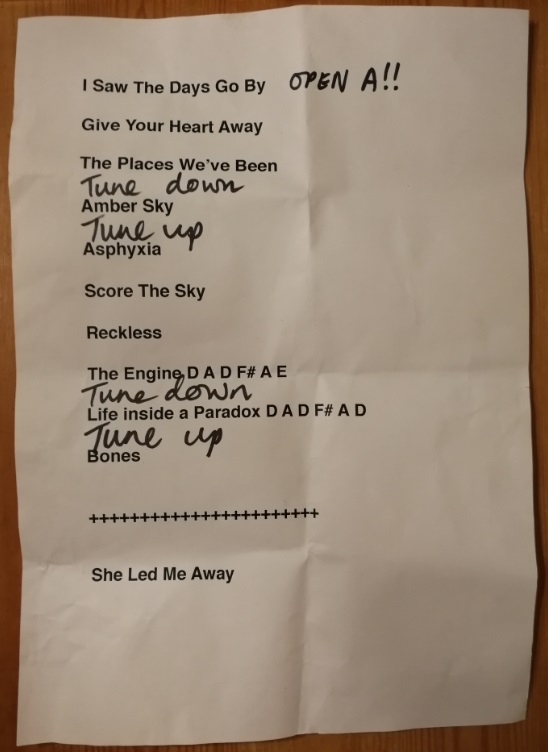