The former Brighton student who killed five people in the Westminster Bridge terror attack in March had been “on MI5’s radar”, according to an official report.

But Khalid Masood, 52, a former Sussex University student, was no longer classed as a threat – or subject of interest.

Masood murdered PC Keith Palmer in the grounds of Parliament in an attack which also left dozens injured.

Details about Masood were published on Tuesday (5 December) in a report entitled Attacks in London and Manchester March to June 2017.

The report, an “independent assessment of MI5 and police internal reviews”, was written by barrister David Anderson. Until earlier this year he was the UK’s independent reviewer of terrorism legislation.

It said: “No intelligence was being gathered on him and neither MI5 nor the police had any reason to anticipate the attack.”

Masood, born Adrian Russell Elms in 1964 and also known as Adrian Ajao, spent his last night at the Preston Park Hotel in Brighton before carrying out his deadly attack.

“Three were killed at the time and 32 were admitted to hospital where one died later and several others were treated for life-changing injuries.

“Masood then took two carving knives out of the vehicle and fatally stabbed PC Keith Palmer where he was on duty outside the Houses of Parliament.

“Masood was shot by armed police and died of his injuries.

“The entire incident lasted around 90 seconds.”

The report also said: “Khalid Masood, though previously known both to the police (for offences of violence prior to 2003) and to MI5 (for association with extremists, particularly between 2010 and 2012) was a closed SOI (subject of interest) at the time of his attack.

“No intelligence was being gathered on him and neither MI5 nor the police had any reason to anticipate the attack. 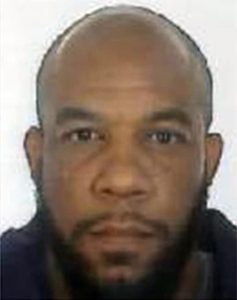 “Prior to the attack in Westminster … both the police and MI5 had some limited (and largely historic) knowledge of him.

“The majority of intelligence held on Khalid Masood was crime-related.

“He was convicted seven times between 1983 and 2003 for offences ranging from criminal damage to possession of an offensive weapon, threatening behavior, assault occasioning actual bodily harm, assault on police and unlawful wounding (a stabbing in the face with a flick knife).

“It is believed that while serving a two-year prison sentence for the latter offence, imposed in July 2000, he converted to Islam.

“Khalid Masood’s final release from prison (from a six-month sentence for possession of an offensive weapon) was in 2003, when he was 38.

“Since that time, there is no record of him committing any criminal offence.

“Khalid Masood had been the subject of active investigation by MI5 between February 2010 and October 2012.

“At the time of the attack he was a closed SOI.

“The first trace of Khalid Masood in MI5 records dates to April 2004 when a telephone number later associated with him appeared in the contacts list of an SOI in an MI5 and police operation that investigated and subsequently disrupted a UK-based terrorist network that aimed to produce and use home-made explosives in the UK.

“Khalid Masood appears to have had no direct connection with that plot.

“Other selectors (eg, phone numbers and email addresses) used by him, but not attributed to him until 2010, appeared on the periphery of various spin-off investigations between 2004 and 2009, via contact with a longstanding associate.

“Khalid Masood came more fully to the attention of MI5 in 2009, on the edge of investigations into a group of individuals seeking to travel to the Federally Administered Tribal Areas of Pakistan (FATA) for al-Qaida-linked terrorist training.

“Though it later turned out that Khalid Masood was not that individual, he was placed under active investigation as an SOI for the first time on 17 February 2010 so as to enable his full identification and assess his level of involvement in extremism.

“The intelligence that prompted investigation of Khalid Masood was low-level, uncorroborated reporting.

“Khalid Masood was not part of the principal reason that any of the investigations mentioned above was of concern to MI5 and was one of many individuals of similar profile that were investigated during that period.

“In December 2010 a review of the operation with which he had been linked recommended that Khalid Masood should be closed as an SOI.

“None of the intelligence relating to him suggested attack planning aspirations. He was formally closed as an SOI in October 2012.

“Between 2012 and 2016, Khalid Masood appeared intermittently as a contact of a number of SOIs, including individuals linked to the proscribed organisation ALM in Luton and Crawley.

“There is no intelligence to suggest that Khalid Masood was an ALM member, though in 2013 he was known to have expressed contentment that violent actions such as the World Trade Center attacks attracted people to Islam.

“Neither Khalid Masood’s contacts nor those comments were considered to reach the threshold for reopening an investigation into him.

“The post-incident investigation commenced immediately after the Westminster attack and shed light on Khalid Masood’s preparation for his attack.

“Between December 2016 and March 2017 he informed members of his family that he was considering working overseas but his job and visa applications were unsuccessful.

“He sold his car and made efforts to say goodbye to members of his family.

“On 9 March 2017, Khalid Masood purchased two Sabatier carving knives from Tesco in Birmingham and on the same day sent himself an email with the subject line ‘Retaliation’.

“On 15 March he was in possession of a document entitled ‘Jihad in the Quran and Sunnah’ with his photograph on the front page and multiple extracts from the Quran that could be claimed to be supportive of jihad and martyrdom.

“Having made a down-payment on 8 March, he collected on 16 March the Hyundai Tucson that was used in the attack.

“On 19 March, Khalid Masood conducted reconnaissance of Westminster Bridge in person and online, and browsed YouTube for videos relating to terrorism (including suicide attacks).

“Further similar browsing was noted over a variety of dates.

“Subsequent searches of various media devices belonging to him concluded that he appeared to advocate a conservative, Saudi-influenced, Salafist interpretation of Islam, but noted that his relatively small digital collection did not contain much of the standard jihadi content that is normally found in investigations involving Islamist-inspired terrorists.

“A few minutes before the attack on 22 March, Khalid Masood shared his Jihad document with numerous WhatsApp contacts.

“Shortly afterwards it was sent via iMessage and SMS to additional contacts.”

In its conclusions and recommendations the report said: “The review team concluded that actions taken in relation to the threat posed by Khalid Masood, including the decision to close him as an SOI, were sound on the basis of the information available at the time.

“It identified, however, a number of learning points and areas where MI5’s policies and processes should be amended.

“Those learning points, with accompanying recommendations, concerned the categorisation of SOIs, record-keeping and the recording of decision-making, the assessment of intelligence on existing SOIs and the handling of intelligence regarding violent behaviour.”

The report, which recommended a wider sharing of intelligence, also looked at the reviews conducted after three other terrorist attacks – at London Bridge, Finsbury Park and the Manchester Arena.