Two Brighton students have joined a crowdfunding attempt to take the government to court over climate change.

They have signed up with charity Plan B which is organising the crowdfunding campaign to fund the case.

The two students are among 11 people aged nine to 79 who have put their names on the claim.

Plan B director Tim Crosland said: “The government knows we’re heading for disaster – in our lifetimes and our children’s.

“It’s criminal and scandalous that it knows exactly what it must do to avoid tragedy but is too weak to do it.

Action against climate change falls under the responsibility of Greg Clark, MP for Tunbridge Wells and Secretary of State for Business, Energy and Industrial Strategy.

Mr Crosland said that Greg Clark is planning on doing nothing and that the government will have a tough job explaining its position in court.

“We shouldn’t have to do this, but we don’t have a choice,” said Mr Crosland.

“Because the government refuses to budge, we must intervene before it’s too late.”

Within hours of its launch on Friday (9 December), supporters pledged £9,595.

Sebastien Kaye, 20, one of the claimants and human geography and international development student at Sussex University, said: “If greenhouse gas emissions continue at their current rates, we will reach catastrophic climate tipping points within my adult life.”

The government passed the Climate Change Act 2008 “to avoid serious harm to human welfare, now and in the future” and “to implement the government’s international obligations”.

In 2016, the government signed the Paris Agreement which marked a turning point in the battle against climate change. 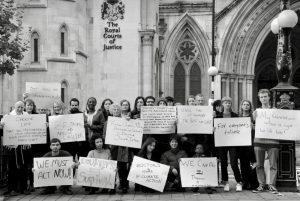 Despite claiming to lead international action against climate change, the British government has not updated its climate change targets in response to the latest science or its legal obligations to protect its citizens, the claimants believe.

The legal action has strong support from backers, including Caroline Lucas, Brighton Pavilion MP and co-leader of the Green Party, and the British Medical Journal.