A 1 per cent rent cut for thousands of council tenants in Brighton and Hove has been supported by the council’s Housing and New Homes Committee.

The rent cut – for the third year running – is government policy. It will mean an average reduction of 84p a week from April, leading to an average weekly rent of £83.60 a week.

The figures were included in the council’s draft £58 million housing revenue account (HRA) budget and £36 million capital spending programme for 2018-19.

The final housing budget will be decided at a full meeting of Brighton and Hove City Council next month.

At the same budget meeting, council tax is expected to be raised by 6 per cent or almost £2 a week for a band D property.

There are almost 11,600 council houses and flats and nearly 3,000 leasehold properties in Brighton and Hove.

A report to the housing committee said that two of the key priorities in the budget strategy for the HRA were to improve the supply and quality of council housing.

Members disagreed about whether £250,000 from tenants’ rents should support part of the youth service budget. A further £170,000 is pencilled in for children’s centre services.

Some believe that the main group to benefit are tenants and their children.

But Green councillor Tom Druitt said that some of the poorest members of the community were effectively paying twice for the service – through their rents, paid into the ringfenced HRA, and their council tax which goes into an account known as the general fund.

The capital programme includes £5 million to build new council housing in 2018-19 and £6 million a year for 10 years afterwards.

Officials highlighted potential breaches of the HRA borrowing limit of £156.8 million in the years to come.

They also noted that the 1 per cent cut in rents would mean less money coming into the HRA.

And impending changes in government policy and to housing law were creating uncertainty, they added, making it harder to forecast HRA finances accurately. Officials counselled caution.

The biggest percentage rise in service charges in the coming year for tenants and leaseholders will be the 15 per cent increase to pay for lift service and maintenance.

The budget papers said: “The current charge does not cover the costs of providing lifts (servicing and repairs) so it is proposed the charge is increased to recover costs.”

Over the next three years the council plans to spend £3.3 million replacing or upgrading lifts after years of complaints from tenants about their reliability and condition. Most lifts in council blocks have already been replaced.

More than £6 million has been set aside over the next three years for fire safety and asbestos management, with a five-year sprinkler programme potentially in the pipeline. Debate on this topic took on a fresh urgency after the Grenfell Tower fire last June.

Plus £4.2 million has been budgeted over three years for roofing, including major reroofing projects like the one carried out last year in Hangleton. 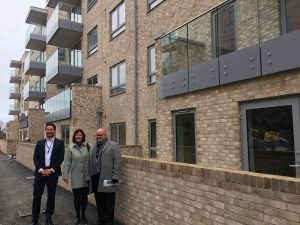 Separately, millions each will be spent on kitchens and bathrooms, rewiring, windows and heating.

Disabled aids and adaptations are expected to cost about £1.15 million a year and officials may spend up to £5 million snapping up former council houses when they come up for sale.

New homes in Selsfield Drive, Moulsecoomb, are expected to cost £3.2 million in the coming year on top of the £2.6 million spent in the current financial year and £2 million last year.

And the council recently completed building 57 flats at Kite Place, in Findon Road, Whitehawk, having spent £5 million in the past year on the scheme.

The £120 million joint venture with Hyde Housing is not included in the housing budget papers.

Any costs will come out of the general fund, with the council funding its share of the project by selling land to the joint venture and assuming that any borrowing required is through the Public Works Loan Board.

The first planning applications under the scheme – for about 300 homes in Coldean, Portslade and Whitehawk – are due soon.