Hundreds of people have signed a petition calling for road safety improvements on a stretch of road where a motorcyclist was badly hurt in a crash.

North Portslade councillor Peter Atkinson was joined by a Labour Party colleague, Peter Kyle, the MP for Hove, as they went door-knocking in Mile Oak. 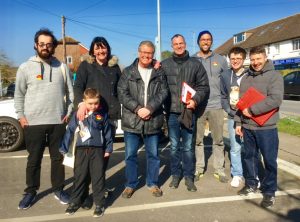 They were drumming up support for a petition to tackle the dangerous stretch of Mile Oak Road where a Suzuki motorbike crashed into a Land Rover in December.

The 27-year-old motorcyclist was taken to the Royal Sussex County Hospital, in Brighton, suffering from head injuries and a broken leg, with multiple fractures.

As well as the paper petition being taken round by Mr Kyle, Councillor Atkinson and local volunteers, an online petition on the 38 Degrees website has attracted more than 350 signatures.

Councillor Atkinson said: “This stretch of road has been of concern to residents for many years now.

“There is a slight hill and a bend which obscures the line of sight for drivers both from the southern part and the northern part of this section of the road.

“Cars and vans are parked on the eastern side of the road which effectively only allows for one lane of traffic or one vehicle to progress at a time through the road.

“This means that cars, vans, buses or motorcyclists will often speed up the road, whether from the northern direction or from the south, in the hope of avoiding traffic coming from the opposite direction.

“This is done without the benefit of actually seeing if anything is heading their way from the opposite direction due to the hill and the bend in the road.

“If a vehicle is heading in their direction then you often have a situation where a driver has to back up for some distance as there are often no passing points until after vehicles have left their parking spaces on the east side of the road.

“You will also often get a near-collision as two drivers only spot each other at the last second.

“It’s only pure luck that there has been no fatal accident on this incredibly dangerous stretch of road and this issue is one that I’m contacted about on a very frequent basis.”