A councillor is calling for a crackdown on verge parking which is blighting dozens of streets across Brighton and Hove. 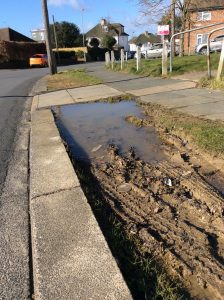 Sunninghill Avenue near the corner of Storrington Close

Grass has been worn away to leave mud. Obstacles placed by the council, such as wooden posts, have been torn out.

And some verges were deeply rutted as well as boggy and puddled during and after rain and looked like small sections of tank-churned battlefields.

Dawn Barnett, who represents Hangleton and Knoll award on Brighton and Hove City Council, said: “Hangleton is a lovely place to live. It really is.

“But some people aren’t taking pride in where they live. They want to park right outside their door instead of walking a few yards. 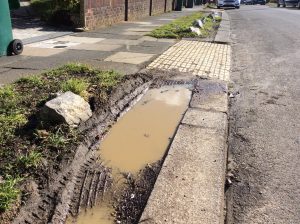 “They’re destroying the verges although some of this is down to delivery drivers.

“I get asked why the council doesn’t do something about it – but it’s not the council that’s the problem.

“It’s the few people who park where they shouldn’t. They’re spoiling it for everybody.

“Some people say we should just concrete them all over but the grass soaks away the rain.

“If all this was concrete, the water would just run down the road. We need the grass for drainage.

“There was enforcement in Portslade. People were given £70 fines. I’d like to see some enforcement over here. I get lots of complaints.

“If they put two around Portslade one day, two around here another and two somewhere else the next, they’d earn their money in a week.

“It’s a shame because it’s spoiling the appearance of our roads.

“It looks like army tanks gone over some of them. I’ve never seen it looking so bad.”

Some people had placed rocks to deter parking or had embedded stakes in the ground.

When the council put stakes in, it carried out checks first for underground cables and pipes.