Residents are being told to keep their windows closed because of a huge fire which has broken out in a woodyard at Shoreham Port by Hove Lagoon. 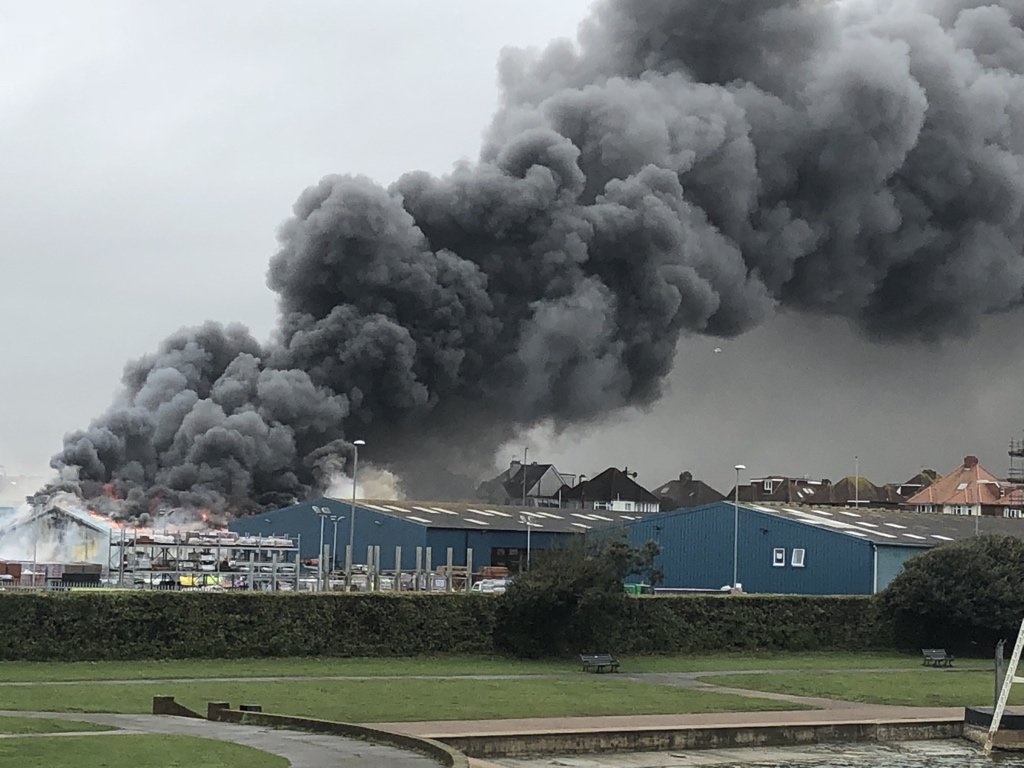 The fire broke out shortly before 9am at Chandlers Builders Supplies in Shoreham Port. Police advised motorists to avoid the area and the A259 was closed until about 3.30pm.

A 300m cordon has been set up and nearby buildings and pedestrians have been evacuated, but nobody has been injured. Gas cylinders which were in the warehouse have all been removed from the scene.

At 3.15pm, the fire service said the incident was being scaled down, but five fire engines were still at the scene and the advice to keep windows closed still stands.

A joint investigation between fire investigators and police has now started to establish how the blaze started. There are unconfirmed reports the fire was started by sparks from a disc grinder. Resident Simon Forrest said he spoke to a man at Hove Lagoon who was wearing a Chandlers hi vis jacket.

He said: “I asked him if it was the Chandlers warehouse and he said yes. Then he went on to explain that there were disc grinders being used to cut old ventilation ducting up. These sparked and set fire to something else.

“It’s mainly wood and plasterboard but he says there are chemicals kept in the building.”

A spokeswoman for East Sussex Fire and Rescue said at 10.05am: “Crews are responding to a serious fire at Chandler Building Supplies, Basin Road. There are now eight fire appliances in attendance at the scene along with two aerial ladder platforms and a water bowser.

“The fire is in a store room of the builders merchants and the building is well alight. The building is approx 13m x 25m. Crews are currently tackling the fire.

“Due to large volumes of smoke, the public are advised to avoid the area. Sussex Police have also implemented road closures in the area and traffic is busy.

“Six fire appliances responded initially from Hove, Shoreham, Roedean and Newhaven along with a further two from Preston Circus.

“A further two fire appliances have now been dispatched from Lewes and Newhaven along with two aerial ladder platforms from Preston Circus and Worthing along with a water carrier.”

A Sussex Police spokeswoman said: “A 300m cordon has been set up and Kingsway from Portslade towards Hove at Berriedale Avenue is closed.

“Pedestrians and workers in the area have been evacuated from the area and there is a diversion from St Keyna Avenue along New Church Road to Berriedale Avenue and residents in the Basin Road North area and Kingsway have been advised to close their windows due to the smoke. No one has been hurt and the incident is ongoing.”

A spokeswoman for Chandlers said: “Firefighters are currently at the Brighton branch of builders merchants, Chandlers Builders Supplies located at Basin Road North, Aldrington Basin. The branch will be closed today.

“The fire service is working at getting the situation under control. It appears that the fire started early this morning. We do not know any further details at this stage. Most importantly, nobody has been harmed or injured.

“Chandlers Building Supplies is a family owned builders merchants and roofing supply specialist with 13 branches throughout London, the South East and the West Midlands. This year it celebrates its 25th anniversary and is backed by a reputation that spans 140 years since its original inception.”

Big warehouse fire on Basin Road North just below the Kingsway coast road in Hove west of Hove Lagoon.
Apparently in Chandlers building. Started by a disc grinder sparking according to eyewitness.#Hove pic.twitter.com/POZO7HO8aV

The smoke, for all who are asking, is from a huge fire at Chandlers in Shoreham Port. Fire crews are there now. #Hove #Brighton @brightonargus @bhcitynews @BrightonIndy @JuiceBrighton pic.twitter.com/Cmios72Dch

Our #Brighton branch currently has a fire in progress. The fire brigade is on site now and no one has been injured. We will keep you updated. #fire #hove

@brightonargus @bhcitynews fire at a warehouse by Hove Lagoon. Seems to be under control but local buildings been evacuated pic.twitter.com/KfOtRJL9D9

A thick plume of grey smoke can be seen over much of West Hove, and from as far away as the racehill in east Brighton.