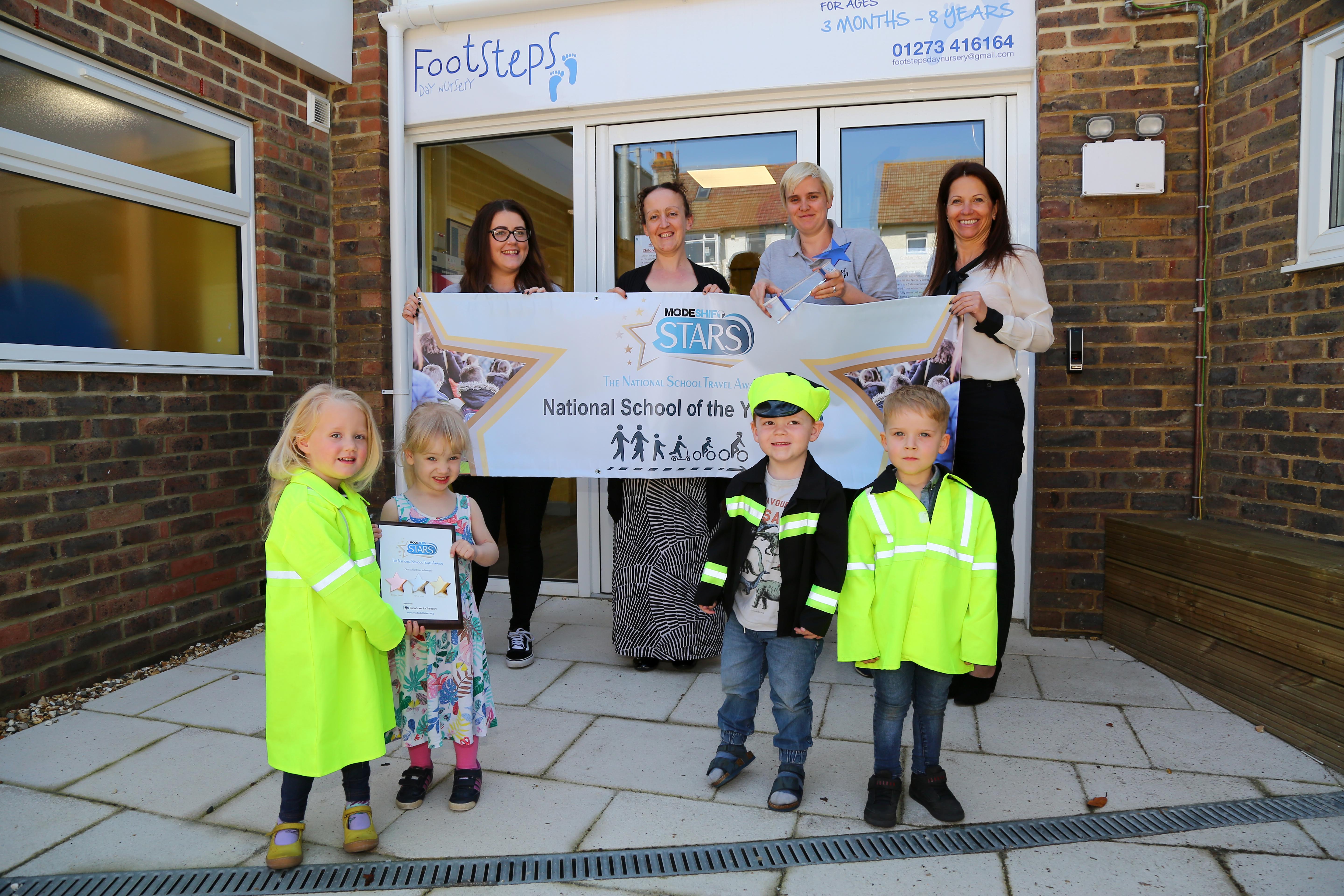 Children and staff from the Footsteps Day Nursery in Portslade are celebrating after winning a national award for encouraging parents to ditch the car.

Two years ago, Footsteps installed scooter storage, updated cycle storage, created a covered waiting/sitting area for parents and made sure that spacious buggy storage was available.

As a result, the number of parents driving their children to nursery dropped from 20% to 8% while walking and scooting both increased by 5% and park and stride – parking away from the nursery and walking the rest of the way – by 10%.

The achievement has led to the nursery has been named Early Years Establishment of the Year in the national STARS awards (Schools Travel Award Scheme).

Councillor Gill Mitchell, chair of the Environment Committee said: “This is a fantastic achievement for Footsteps Nursery and I’d like to congratulate everyone who has contributed towards this success.

“Walking, scooting or cycling to nursery, or parking away from nursery and walking the last 5 or 10 minutes, can contribute significantly to recommended activity levels, as well as helping to ease congestion around the city.”

Ross Butcher, National Chair of Modeshift, which arranges the awards, said: “Every year it is an honour to hear about the new and creative ways that schools and nurseries come up with to engage their communities in the promotion of sustainable travel.

“Over 3,200 schools nationally have signed up to Modeshift STARS so each of our STARS schools of the region has proven to be at the forefront of our collective effort to encourage more young people and their families to adopt healthy and sustainable forms of travel.”

The award was presented at a special event at the Houses of Parliament, hosted by Andrew Selous MP, Co-Chair of the All-Party Parliamentary Cycling Group.

Supported by the Department for Transport, the STARS school travel awards scheme aims to promote sustainable travel for the journeys to and from school and nursery.

Around 15,000 schools from 69 local authorities across the country currently take part in the scheme.

In April 2017, Footsteps Portslade achieved Modeshift STARS Gold accreditation for its work to support cycling, walking and other forms of sustainable travel.

It joined two other nurseries in Brighton and Hove – Footsteps Day Nursery in Hove and My First Friends Nursery in Westdene – which were the first nurseries in the country to achieve Gold Modeshift STARS. All three nurseries were also shortlisted for the award for South East STARS Early Years Establishment of the Region.