As temporary custodians of Brighton and Hove, it’s our job to enhance the inheritance we hand on

This is my last column for Brighton and Hove News as leader of the city council before I hand over to Councillor Dan Yates on Thursday 17 May.

It’s been an enormous privilege to lead the city over the past three years and the Labour and Co-operative group of councillors for the last five.

In 2015 I took Labour from third place back to first on the council, removing the divided and unpopular Green administration that promised much but delivered little.

Despite the ongoing cuts of tens of millions of pounds in funding from the Conservative government, and the escalating costs of social care, we’ve balanced the books, kept services running, improved resident satisfaction, upped our recycling rates and prevented any compulsory redundancies in the council workforce.

We’ve broken the logjam on new projects and economic development in the city.

Cranes are up at Circus Street, Preston Barracks and the seafront Shelter Hall. The King Alfred, new Churchill Square and replacement Brighton Centre are on the way. And work begins on restoring the Madeira Terraces this summer.

We’ve delivered more new council homes in one year than at any time in the past three decades.

We will soon begin on the first three sites in our joint venture to deliver a thousand genuinely affordable homes and brought a new and co-ordinated focus to the urgent task of helping people sleeping rough on our streets.

There is always more to do, things I wish I could have achieved. Some personal highlights though will be the success of the crowdfunding campaign for the Terraces and of course the Freedom of the City for the Albion’s Chris Hughton and Tony Bloom. 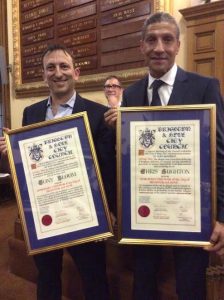 I’ve done my best to be as open, honest and clear as I can in my communication with residents, through this column, on radio and TV, and online.

While of course I’ve argued the case for my party, I hope I’ve spoken above and beyond partisan politics and put Brighton and Hove first.

If you have been a regular reader of this column, thank you for reading. If I’ve done anything, I hope it is to have inspired some of you to get involved in your city and your community, to campaign, take responsibility and get involved while treating others with respect, whoever they are and whatever their beliefs.

Brighton and Hove is a special place and we are the temporary custodians of it.

My task over the past three years has been one we all share, to take what we have inherited, care for it as best we can and pass it on to future generations for them to enjoy and enhance in their own way.