An attempt by Hove MP Peter Kyle to lower the voting age to 16 was thwarted in the House of Commons this afternoon (Friday 11 May). 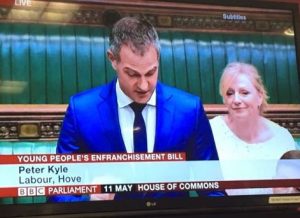 He is trying to pilot a private member’s bill through Parliament but ran out of time after his political opponents filibustered.

They spent hours discussing an earlier and relatively uncontroversial bill to give bereaved parents and carers paid compassionate leave on the death of a child.

Mr Kyle was left with just 28 minutes to try to win round his fellow MPs but the deputy speaker Eleanor Laing, chairing the debate, said that more time was needed.

The debate has been scheduled to resume on Friday 26 October.

“Let me begin by paying tribute to the many people and organisations that have been campaigning for a very long time to enfranchise 16 and 17-year-olds.

“There are too many to mention, but I want to single out the work of one organisation, the Association of Colleges, in recent months.

“The AOC represents further education colleges and sixth forms across the country and, while it often campaigns on matters of policy, this is the first time it has spoken out about such a politically charged issue.

“Like so many other youth organisations, it understands that young people have become disempowered and, as a community, are losing out as a result.

“The challenges that our country faces are increasingly long term, from paying off our national debt to picking up the pieces from the Brexit referendum.

“Those are the challenges that our generation will hand down to the next, yet our political system locks out the very people who will be living longest with the consequences. It is time for that to change.

“There are many technical, practical, political and even emotional reasons for the change to happen but for me it always comes down to one thing.

“Our politics is missing out on the wisdom and insight of young people. Many other members throughout the House have come to the same conclusion. 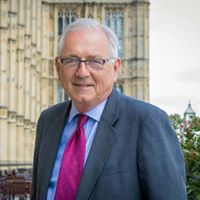 “Their sponsorship illustrates perfectly that this is not a partisan issue but one that has support from senior members on both sides of the House.

“The honourable member for Worthing West (Sir Peter Bottomley), who is not in his place, has been a solitary voice on this issue on the Conservative benches.

“But he has been joined by a new generation of members who are speaking out with real passion and commitment to delivering votes for 16 and 17-year-olds, in particular the honourable member for East Renfrewshire (Paul Masterton), for Berwickshire, Roxburgh and Selkirk (John Lamont), for Ochil and South Perthshire (Luke Graham) – who is in his place – and for Ayr, Carrick and Cumnock (Bill Grant).

“They have been a powerful voice for change on their benches and we should celebrate that across the House.

“It is no surprise that they represent Scottish constituencies because Scotland is the perfect illustration of why the present settlement is simply not fit for purpose.

“Some people ask why 16 and not 15? There are two reasons. First, I believe that education to GCSE level equips young people with all the knowledge and critical thinking that is needed.

“Secondly, we have the practical experience in other parts of the United Kingdom that shows that it simply works.

“A 16-year-old in Scotland can vote in referendums, in local elections and for their preferred candidate standing for the Scottish Parliament but they have no say in who gets sent to Westminster.

“I do not believe that there is a member in this chamber willing to make the argument that the capacity needed to pick a representative for this parliament is in any way different to that needed for the Scottish Parliament or indeed a local authority.

“Similarly, there is no evidence and nobody making the argument that since 16 and 17-year-olds were enfranchised in Scotland, subsequent elections and the referendum were in any way negatively distorted as a result of their participation.

“Now that 16 and 17-year-olds are able to participate in Welsh elections and those in the Channel Islands, it leaves England and Northern Ireland as the democratic laggards of the United Kingdom.

“Britain has become a democratic postcode lottery and it needs fixing. 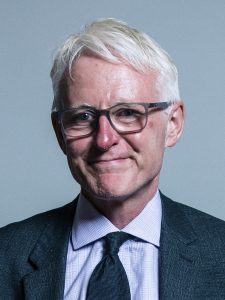 “We should all pity the Tory candidate who has to speak at a hustings in a future English election. They will have to explain to a 17-year-old questioner why their party believes that English teenagers lack the intellect, experience and common sense of their Welsh and Scottish counterparts and cannot be trusted with the vote. It is politically unsustainable.

“When I held a question and answer session with young people at Brighton, Hove and Sussex VI Form College (BHASVIC) recently, their questions were erudite, thoughtful and passionate and rarely concerned their own lived experience in an educational establishment but addressed the big issues facing their community, our country and our planet.

“My bill would not just enfranchise young people, it would embrace them. By auto-enrolling under-24s and placing polling stations in educational establishments, it would strive to get young people into the habit of voting. Evidence shows that it is a habit that lasts a lifetime.

“Some people point to things that 16-year-olds are not allowed to do, such as drinking and smoking, but I urge members not to link voting with public health issues. I think that would be perverse, not least because I look forward to banning smoking entirely.

“If public health and voting ages were linked, where would that leave voter turnout?

“We must look at this issue on its own merits, based on the formidable capabilities of today’s young people. We must think about what kind of democracy we should be.

“I think we would find that this generation of 16 and 17-year-olds and this generation of young people are far more sensible about drink, drugs and gambling than previous generations – and I think their voice and experience should be heard as we make policies, not shut out.

As the sitting drew to a close, Brighton Kemptown MP Lloyd Russell-Moyle quizzed the deputy speaker.

The Labour MP asked: “When we tried to bring this matter to a vote with the last private member’s bill on the subject, you stated that you felt more time was need to debate this issue.

“Could you advise me on how much more time you think is needed to debate this issue before this House will get a vote on it?”

Mrs Laing said: “It is normal for the ‘second reading’ debate on a bill to have some three, four or five hours on the floor of the House.

“This bill has had only 28 minutes this afternoon but the matter is not up to me. It is normal to have considerably longer than 28 minutes to deal with very important matters.”