And Smith must score … 35 years on

Almost to the second. It was around 5.24pm on Saturday 21 May 1983 with the world watching on that Gordon Smith missed that glorious chance to win the FA Cup for Brighton and Hove Albion. 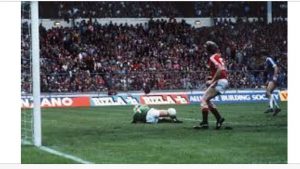 Until last year´s fantastic promotion to the Premier League it was what Albion were best remembered for in the intervening years.

This was the day Brighton and Hove was virtually deserted on a Saturday afternoon, as the entire conurbation watched the Seagulls either those like me, lucky enough to be at Wembley, or at home on TV

Smith scored the opener in a 2-2 thriller against Manchester United but lost the replay. England defender Gary Stevens also netted for the Seagulls.

The last chance fell to Smith who once said that every day at least one person would come up to him and remind him of that moment.

As the Scottish striker stood in the Wembley penalty area with his head in his hands in the last seconds of extra-time , as goalkeeper Gary Bailey gratefully clutched the ball to his chest, BBC commentator Peter Jones said: “And Gordon Smith will remember that moment for a very, very long time indeed.”

We all do Gordon. We all do.