A funding boost for the creative and digital sector could be on the cards in Brighton and Hove and the surrounding area.

The government is offering £20 million to encourage places like Brighton to do more with its cultural capital to boost economic growth.

The cost of studio space and premises for digital start-ups have previously been identified as barriers to growth in the local area.

This week the Greater Brighton Economic Board agreed to pitch for funding – with between £3 million and £7 million on offer from the £20 million pot.

Just six areas outside of London will win a share of the cash.

The Arts Council England is running the bidding process and has called for expressions of interest to be submitted in the coming weeks.

If successful, Greater Brighton will work with the Arts Council on a full bid during September and October.

At a meeting on Tuesday (17 July), economic board members were told that Brighton and the surrounding area – an internationally recognised cultural centre – had almost 3,000 creative businesses employing more than 7,600 people.

A report said: “Brighton boasts one of the largest populations of freelancers and homeworkers in the UK.

“Brighton’s creativity is especially well connected to technology as seen in the proliferation of fusion companies melding creativity with science, technology, engineering and maths (STEM).

“It is at the forefront of advances in artificial intelligence (AI), augmented reality (AR) and search engine optimisation (SEO) and has a well developed screen (film, media and television) sector.

“These are companies which have high levels of IT, design (and) advertising capability and which offer some of the highest potential for growth.” 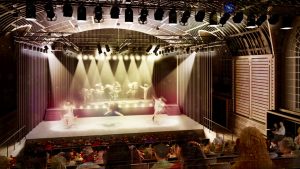 A visualisation of the performance space at the Corn Exchange

Phil Jones, who runs the digital sector’s umbrella group Wired Sussex, told the economic board: “We need to align our cultural and creative strengths with our digital strengths.”

Sue Baxter, from Brighton University, said: “We should present evidence of what difference getting help from central government would make to our success as a sector.”

Professor Baxter added: ”It would help position the UK as a testbed for identifying the new kinds of skills that we can’t necessarily envisage yet and which might help the UK in ways we might not yet appreciate.”

The economic board agreed to submit an expression of interest, with the “Creative Coast” as its working title.

Call to end unpaid trial shifts in Brighton and Hove