Police have asked for help identifying a man suspected of stealing a bank card in Brighton. 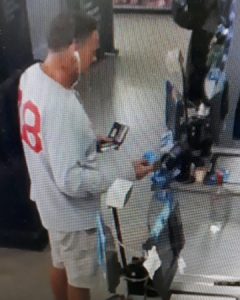 The force said: “Police investigating the theft of a bank card have released this CCTV image of a man they wish to speak to.

“The bank card was in a black rucksack which was left unattended at St Peter’s Church in York Place, Brighton, on Sunday 15 July between 11am and 11.30am.

“The bag, which also contained a laptop, mobile phones, a purse, money and other bank cards, was subsequently stolen.

“At around 11.28am the victim’s bank card was used at the Co-op store in London Road, Brighton, by a man who was captured on CCTV.”

PC Peter Trimby said: “The victim was upset that her bag was stolen from the church, a place of safety, and then her bank card was used.”

Sussex Police added: “If anyone recognises the man or has any information about the incident contact police online or ring 101 quoting serial 563 of 15/07.”