Four years after people started the fight to save the Cuthbert Pub, new plans for a café, offices and flats have gone in to Brighton and Hove City Council. 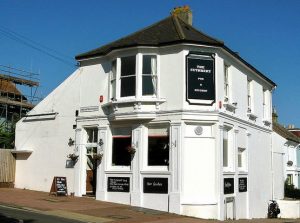 Plans for the site in Freshfield Road, Brighton, include building a three-storey extension on the side of the building for flats.

Proposals for the ground floor include a community café and office space.

The new application was posted on the council website earlier this week, with the comments welcomed.

Previous plans by owners Godfrey Investments include two applications to convert the pub into a house and build flats in an extension.

Community campaigners known as Bungaroosh submitted their own plans to convert the building into a community café.

The group had won more than £14,000 of government money to develop their plans for a community hub at the former pub.

Residents were invited to view the plans at the owners’ offices and seven people went along.

In their design statement architects Mohsin Cooper said: “All agreed the site is long overdue redevelopment and many locals consider the derelict pub something of an eyesore.

“A mixed use scheme was welcomed by all, in particular the café, which would be a very welcome community facility and place for locals to meet.” 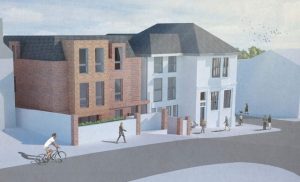 Neighbour and Bungaroosh member Jen Booth said: “I’m not keen on the flats. The garden should be part of the café.

“It would be nice if the office space was a community area or hot desk something or other.”

Detailed plans are available on Brighton and Hove City Council website by searching for BH2018/02114.