Revised plans to build a care home on a derelict site in Hollingdean have been submitted to Brighton and Hove City Council. 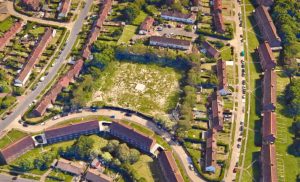 The site owner, Hazeldene Project Management, wants to build a three-storey care home with more than 80 bedrooms at Grove Park, the former William Moon Lodge site, in The Linkway.

The company already has two existing planning permissions for a two-storey care home at Grove Park. One set of approved plans includes 100 bedrooms while the other has 75 bedrooms.

The 39 proposed parking spaces in the latest plans would be more than double the 18 offered in previous applications.

William Moon Lodge was home to Sussex Lantern from 1994 until 2006 when the charity for the partially sighted moved out as it could no longer afford to maintain the 43-year-old building.

The site has remained empty for 10 years after the original 1963 former care home was demolished.

In the latest application the ground floor would be below street level while the building would have a smaller footprint than in previous plans.

The proposed buildings in previous applications were closer to the edge of the site. The new plans indicate that the building would be more central, with more room for parking.

Each floor in the planned home would house people with different needs.

Planning consultant Lewis and Co described the latest proposed building as “visually superior” to those in previous applications.

The application is also intended to deal with neighbours’ concerns about parking raised after previous plans were submitted.

Lewis and Co said: “The scheme responds to earlier comments made by residents with regard to car parking levels by proposing an increase in parking compared to earlier schemes.

“This will help alleviate parking stress, especially in The Linkway which is a narrow road where parking is only available on one side of the road.”

Neighbours said that there were parking problems, with the site so close to St Joseph’s RC Primary School, especially at morning and afternoon pick-up time.

An outlying badger sett would be removed from the site once construction begins, according to the proposal.

The application is open for comment on the council’s online planning pages, reference BH2018/02051.