Businesses hoping to celebrate Pride this weekend by laying on a party have been rebuffed by council licensing chiefs.

Twenty-two firms from bars to coffee sellers to car hire companies have applied for permission to sell alcoholic drinks as huge crowds are expected in town.

But objections from Sussex Police persuaded most applicants to drop their plans.

Some applications – to extend existing licences temporarily or to grant a one-off licence – were heard by a Brighton and Hove City Council licensing panel.

The most recent panel hearings dealt with requests from the Dialling In coffee kiosk, in New Road, and Chapter XIII tattoo parlour and café, in Pool Valley.

Chapter XIII owner Jessica Stocker told a licensing panel yesterday (Wednesday 1 August) that she just wanted to sell alcohol during her normal trading hours and had no plans for a party.

But the panel was told that for the past two years Pride parties at the venue had got out of control.

Sussex Police licensing officer Mark Thoroughgood said: “Over the last two years this venue has seen the single biggest use of police resources in the city during Pride weekend.”

When asked for details he said: “Out of all the other venues in the city, Chapter XIII used the most resources.

“We have to bring in extra officers, licensing officers as well as calling the superintendent about what we needed to do with the party.”

In 2016 a pirate radio station set up as part of the ChapterXIII party, resulting in 300 people filling the streets.

Miss Stocker was served with a noise abaitment notice but held another event last year. 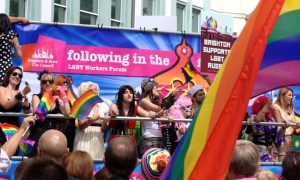 In August last year more than 800 people filled Pool Valley. Again a stage had been set up with DJs and a sound system even though an undertaking had been given to play only background music.

National Express coaches were backed up into Old Steine as they could not safely enter Pool Valley.

Miss Stocker told the panel that in the past three years she had held 30 events without any problems.

Referring her to plans for Pride, she said: “I’m not holding an event. There’s no DJ. I’m just doing my normal trading hours as for the last two years it has not gone right.

“I have taken on board all the points made over the last three years.”

She added: “I enjoy Pride and I want to be open.”

The result of her application is pending. 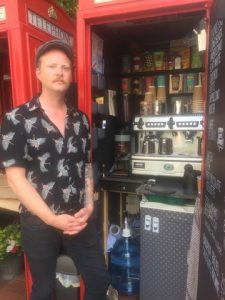 Mr Ackerly, who runs the Dialling In coffee business from an old red phone box in New Road, was told that he could not set up a cocktail bar for the Pride weekend.

He said that, as an existing personal licence holder and experienced bar manager, he understood his responsibilities.

But the councillors who made up the licensing panel said no, citing concerns about the location and the fact that the kiosk did not have an existing premises licence.

The firm wanted to operate two bars with music for a ticketed event under its arches by the railway viaduct.

And in May, CBD Ethics, in George Street, Brighton, was also refused permission to sell alcohol from its shop.