Brighton and Hove Albion have signed a young Ecuadorian striker on a four-year contract. 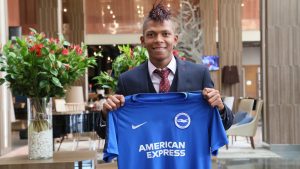 After sealing the deal, the Seagulls have sent Billy Arce, who turned 20 last month, out on loan to a second-tier Spanish side for the coming season.

The club said: “Brighton and Hove Albion have completed the signing of Billy Arce from Ecuadorian side CSD Independiente Del Valle on undisclosed terms.

“The 20-year-old has signed a four-year contract with Albion but will spend the upcoming season with the La Liga 2 club Extremadura UD on a season-long loan deal.”

Albion’s pathway development manager David Weir said: “We are delighted to sign Billy. He is an exciting young player with very good potential.

“We will monitor his progress over the course of the season during his time with Extremadura UD and we hope the loan move will enable him to continue his development here in Europe.”

Albion said: “Arce has made a total of 22 appearances for Independiente during the 2018 season, scoring seven goals.

“His move to Albion will be the first transfer of Arce’s career and he leaves the Ecuadorian club having scored 19 goals in 56 appearances across all competitions.”