Moves to relax the rules around a controversial process known as fracking have met with opposition from councillors in Brighton and Hove.

Their opposition comes as fracking – hydraulic fracturing of rocks to extract gas – has been suspended in Lancashire after earth tremors in the area.

It also comes in response to their concerns about the possibility of fracking closer to home – in Balcombe, between Haywards Heath and Crawley.

The test site in the West Sussex village – 20 miles from Brighton – is operated by Cuadrilla, the fracking company that has halted work in Little Plumpton, seven miles from Blackpool, where there have been 18 earth tremors in 11 days.

The 17th tremor was strong enough to be classified a “red event”, resulting in the company putting a halt to drilling on Friday (26 October).

Green councillor Leo Littman said that he was concerned about fracking causing earthquakes.

He said: “I find it monumentally disappointing we are discussing fracking when virtually no one, apart from those who want to make a profit, support fracking.”

Green convenor Phélim Mac Cafferty said that government proposals to include fracking as a “permitted development” – with no need for planning permission – would mean that exploration was treated like putting up a garden shed.

Councillor Mac Cafferty described fracking taking place in national parks and mentioned the test site at Balcombe. He said: “The Weald could be pock-marked with oil wells.

“Balcombe is too close to our water supply for comfort and could be disastrous.

“This has gone too far already. The government should listen to 99 per cent of scientists and our community.”

He said that fracking uses millions of litres of water in an area which is suffering a shortage. 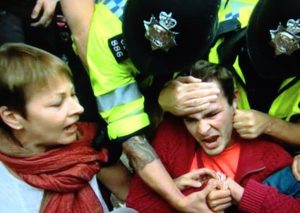 Caroline Lucas at a fracking protest in Balcombe

Conservative opposition leader Councillor Tony Janio said that he understood extracting shale gas was not popular but said that it was less polluting compared with other fossil fuels.

Councillor Janio said: “Once we have done the research we can base our actions on facts not prejudice – as energy fuel bills continue to soar year on year and, with the potential to create 64,000 jobs, while shale gas by driving energy prices down has the potential to help the poorest in society.”

Councillor Janio described Councillor Mac Cafferty’s vision as one of a Mad Max dystopia which would never happen.

He said that wind, solar, biomass and hydroelectric power were meeting a third of the country’s energy demands but people still needed gas for heating and cooking.

Councillors have agreed to write to the Brighton and Hove’s three MPs asking them to oppose government plans to allow fracking companies to drill without planning permission.

They also voted to ask the Secretary of State to allow councils to retain their keep control of decisions about oil and gas exploration.