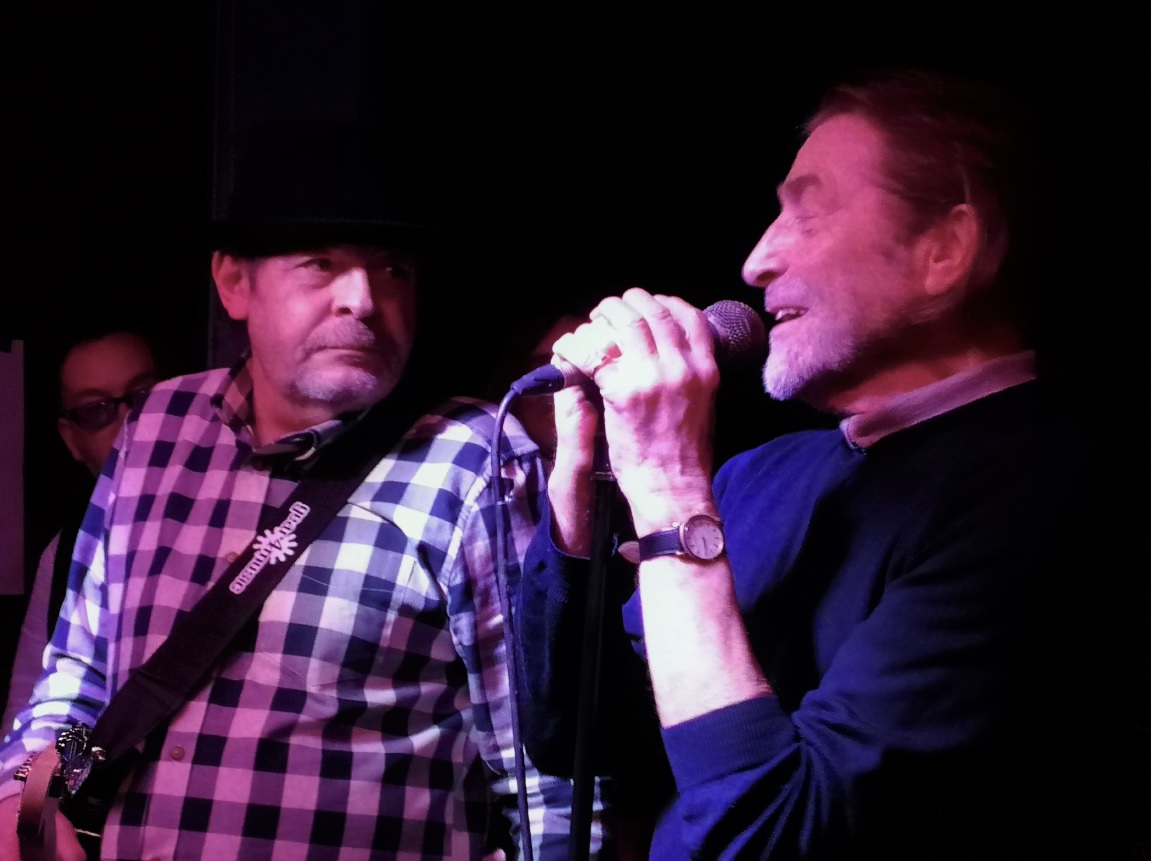 Well would you believe it. After a mere gap of just thirty-eight and a half years, or to be exact, 14,088 days, here I was actually watching Brighton’s Golinski Brothers performing live again. 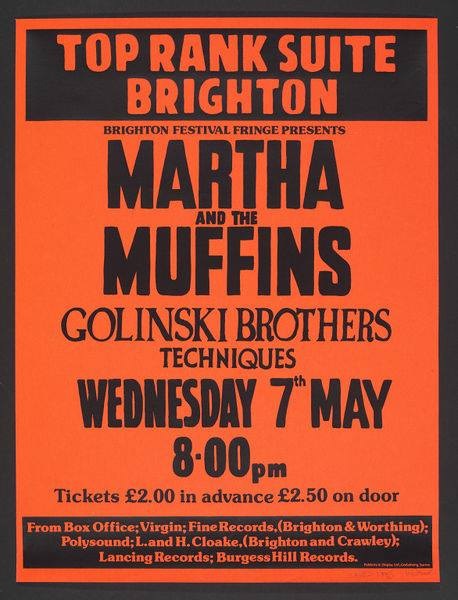 The last time I witnessed them was at the Top Rank Suite in Brighton on Wednesday 7th May 1980, when they were supporting the then popular Canadian band Martha & The Muffins, who were riding high in the Top 10 singles chart with their catchy ‘Echo Beach’ tune, which had been released on 8th February 1980. The album it was culled from was entitled ‘Metro Music’ and that was sitting inside the Top 40 album charts too, so a support slot of this nature for Golinski Brothers was no doubt gladly accepted. Also on the bill were another local band called Techniques. 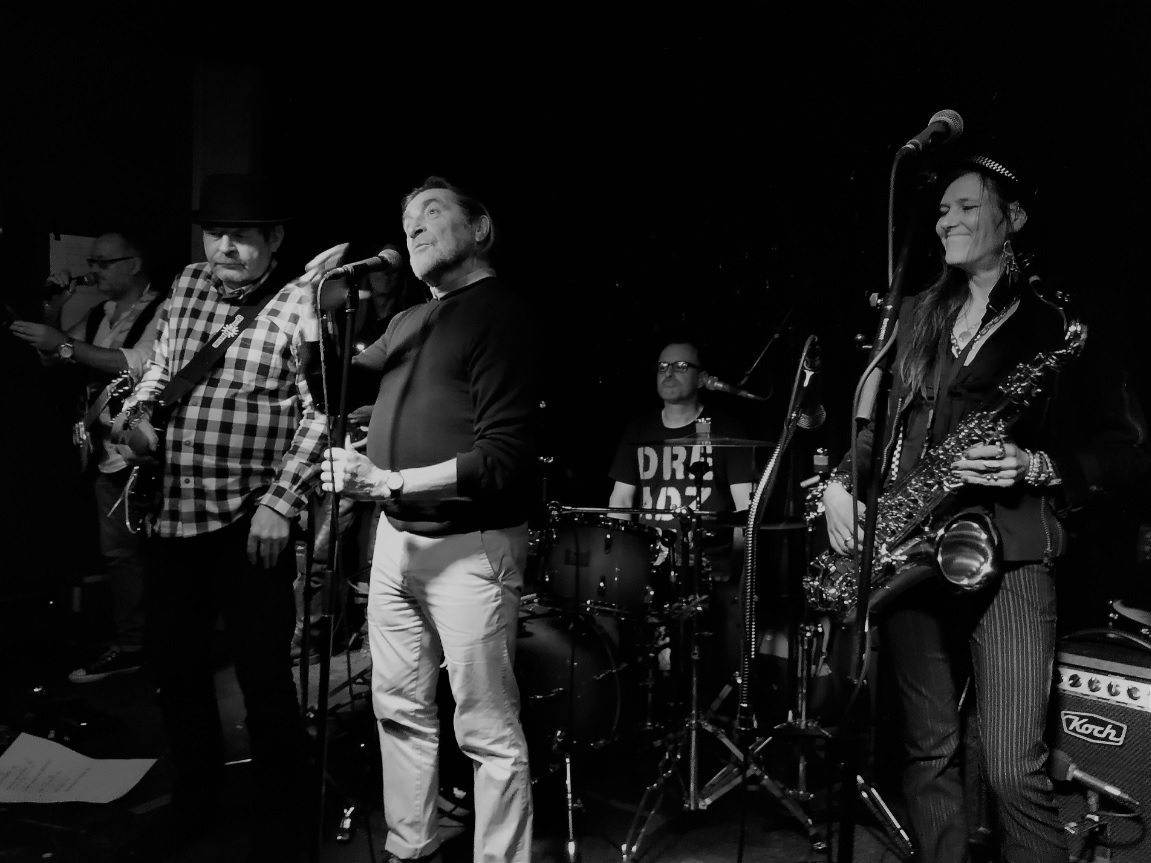 There are some things you can recall from certain gigs and the 1980 gig was one of them. As I can easily recall the Golinski Brothers lead singer thanking Martha & The Muffins for having them on the bill. However naughty Darris didn’t exactly get the band name correct, as there was a diving reference thrown out to the audience, but no mention of water! 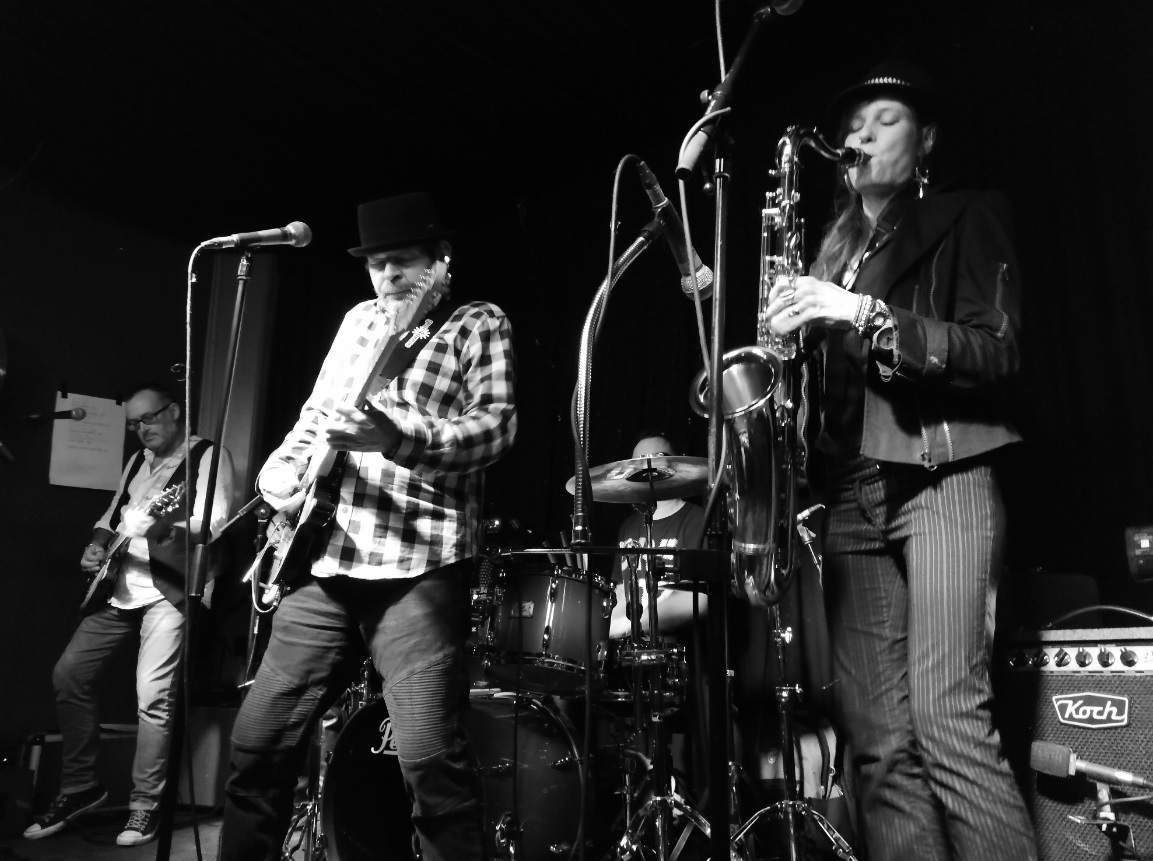 Anyway, back to the present and the Prince Albert this evening was rammed, both downstairs at the bar and upstairs at the venue. Half of those present were no doubt Christmas revellers and the other half were stationed waiting and ready for the two bands to perform.

Tonight I could have chosen to see Madness performing at the Brighton Centre, (read our review of that concert HERE), but I decided to let a couple of the other guys in the team review that gig as tonight was seriously rumoured to be the Golinski Brothers last ever performance, where only time will tell, and also that lovable ‘Boring’ Bob Grover had reconvened his latest incarnation of The Piranhas, which are now called Piranhas 4+ and they were having their debut outing tonight, so for me personally it was a no brainer. 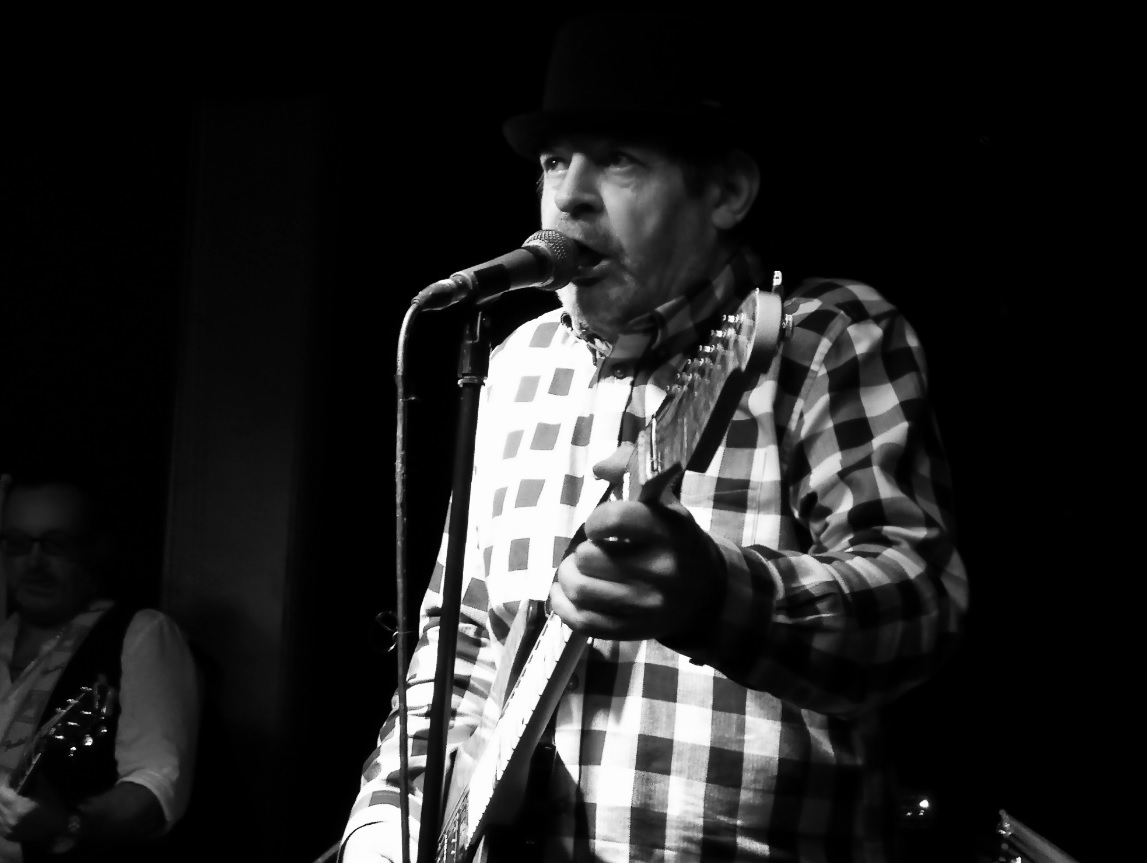 Back in the day both the Golinski Brothers and The Piranhas had released material on the wonderful Attrix Records, which I can fondly remember being based in North Laine at the far right (Kensington Gardens end) of Sydney Street in Brighton. It was there that I purchased the ‘Vaultage 79 – Another Two Sides Of Brighton’ compilation album that had a couple of tracks by the Golinski’s, namely ‘Too Scared’ and the wonderful ‘Bloody’. This was the second of a trio of annual Vaultage Brighton acts compilations, with The Piranhas appearing on the previous ‘Vaultage 78 – Two Sides Of Brighton’, with their superb offerings of ‘Tension’ and ‘Virginity’.

Here we are half a lifetime later and three of the above tunes had outings tonight, with the sad omission being ‘Virginity’.

First up was the new-look Piranhas 4+, who’s personnel are Bob Grover (lead vocals/guitar), Gary Browne (guitar/vocals), Paul Witts (harmonica/whistle/vocals), Stu Wagstaff (bass), Bon Besom (sax) and would you Adam & Eve it but my old Gary Numan mate Stuart Dyehouse has turned up on drums and vocals! 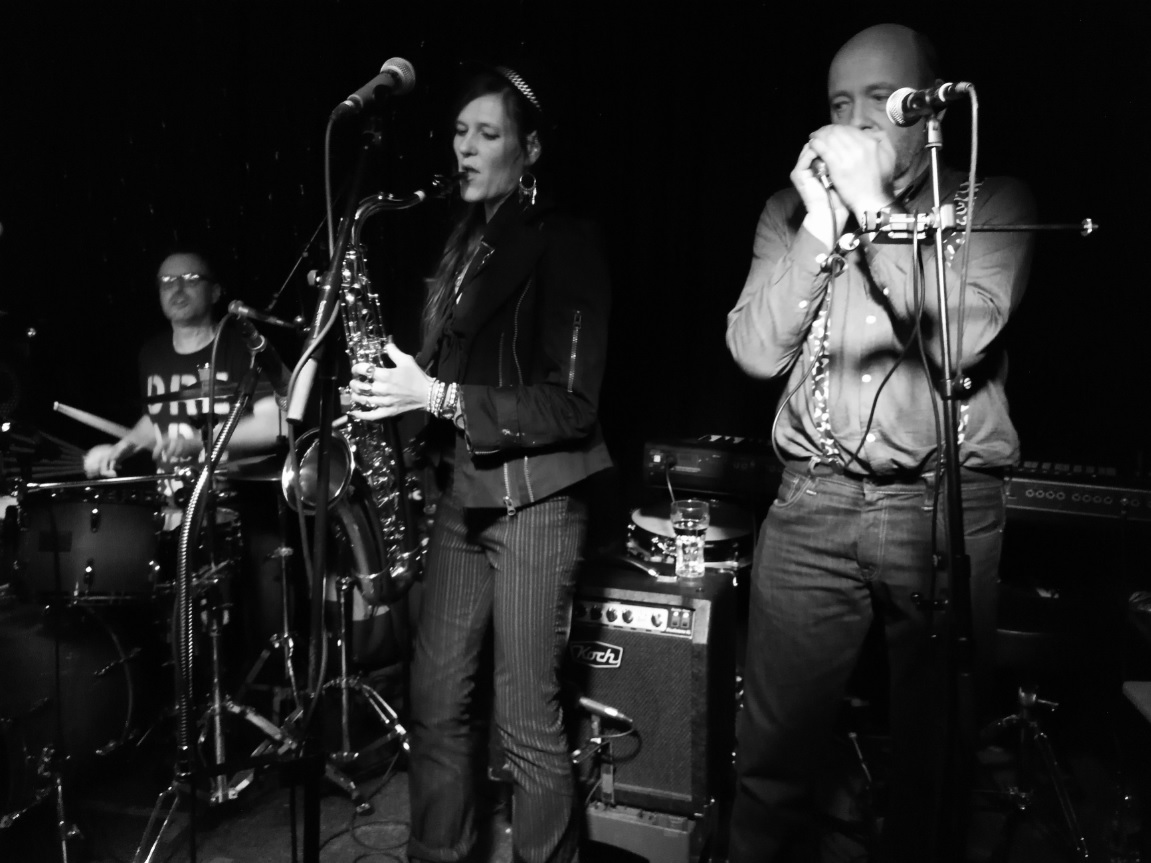 I brought a mate along to tonight’s proceedings and he didn’t really know too much about either outfit, but he did make a valid assumption and that being that ‘Boring’ Bob should be a stand-up comedian. Yes, he is a very likeable fellow that can come out with a quip or three.

The new lineup were having the banter and I must say played a decent fourteen song set with the highlight obviously being their No.6 UK hit single ‘Tom Hark’ which was backed on 7” vinyl by the fab ‘Getting Beaten Up’, which also got an airing tonight. This made ever-present punk fan Smelly address Bob informing him and the punters that amazingly he has never been beaten up. Just don’t mention the times that you have been thrown out of venues eh Smelly, eg Theatre Of Hate Coalition etc. Anyway move on bless him….. 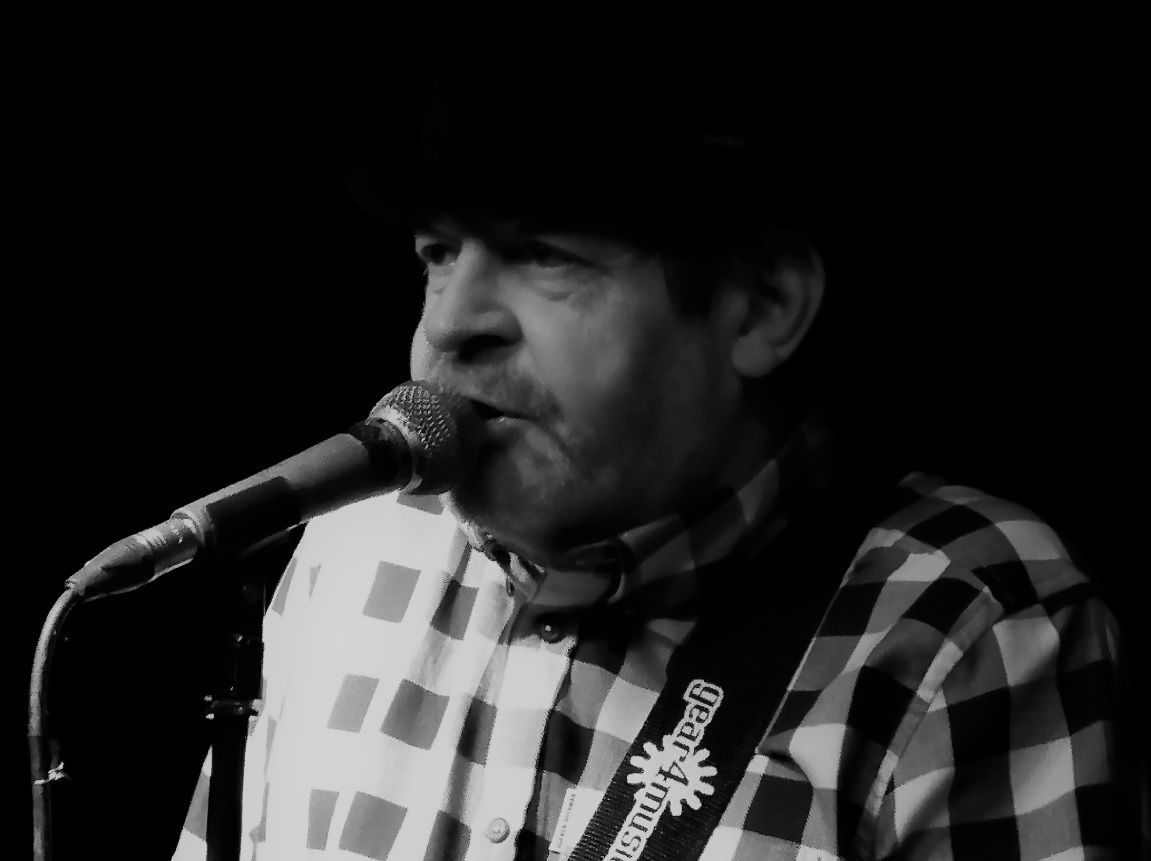 We loved Bob’s recount about being in the offices of Virgin Records and them not really being interested in signing the band and on the way out Bob spied a brand new Space Invaders arcade game in their offices. Thinking outside the box, he went home and wrote the track ‘Space Invaders’ which the band recorded and sent to Virgin. They signed them up! Grover 1 Branson 0.

On my way home I found myself singing ‘Jilly’ and yet that was the first tune tonight, cor talk about an ear worm. An enjoyable set, but next time we should like to also have the aforementioned ‘Virginity’ and the catchy ‘Zambezi’….”Zambezi, Zambezi, Zambezi, I’m On My Way”…

If you enjoy the ska side of The Piranhas such as ‘Tom Hark’, then you will enjoy reading our concert report on Bad Manners who performed in Brighton on the following evening. Read our report HERE. 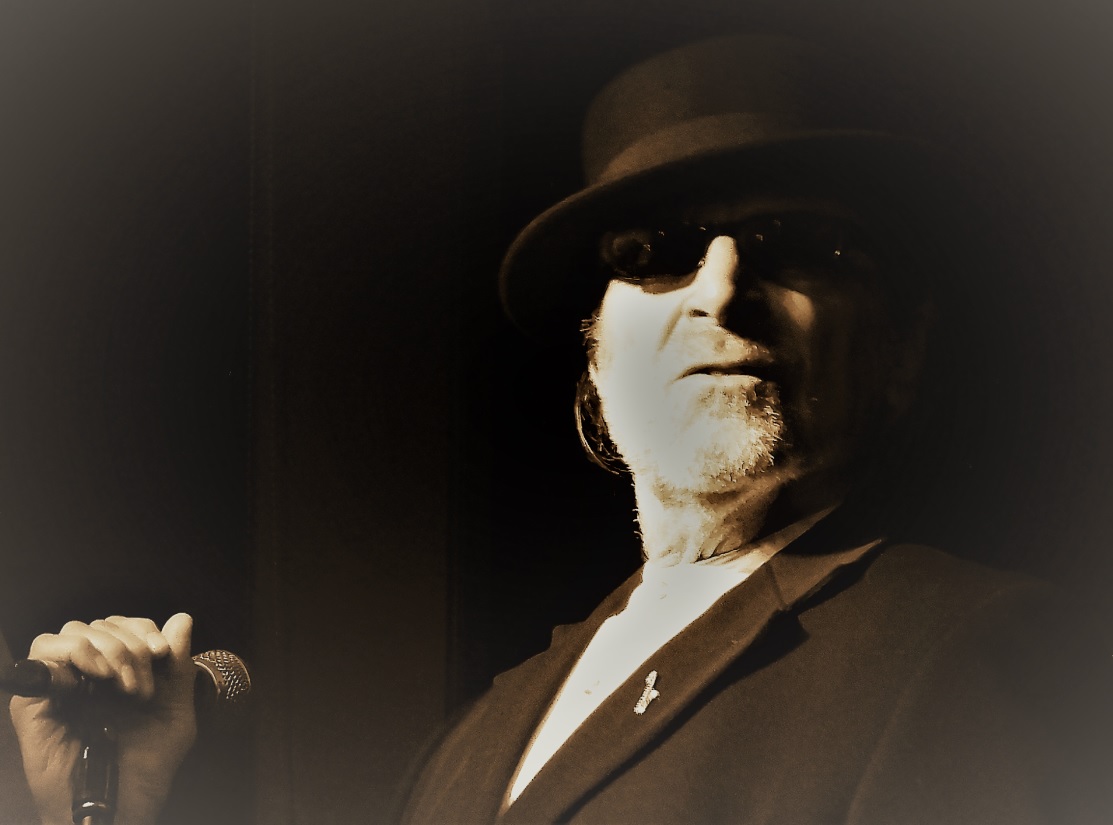 Having introduced The Piranhas 4+, at the start of their set, it was time for Darris Golinski and his five pals to take the stage. The Golinski Brothers are Darris Golinski (vocals), Bob Golinski (guitar), Ollie Crooke (bass), David Potter (tenor sax/vocals), Alfie Bines (alto sax & keyboards) and Paul Denney (drums). 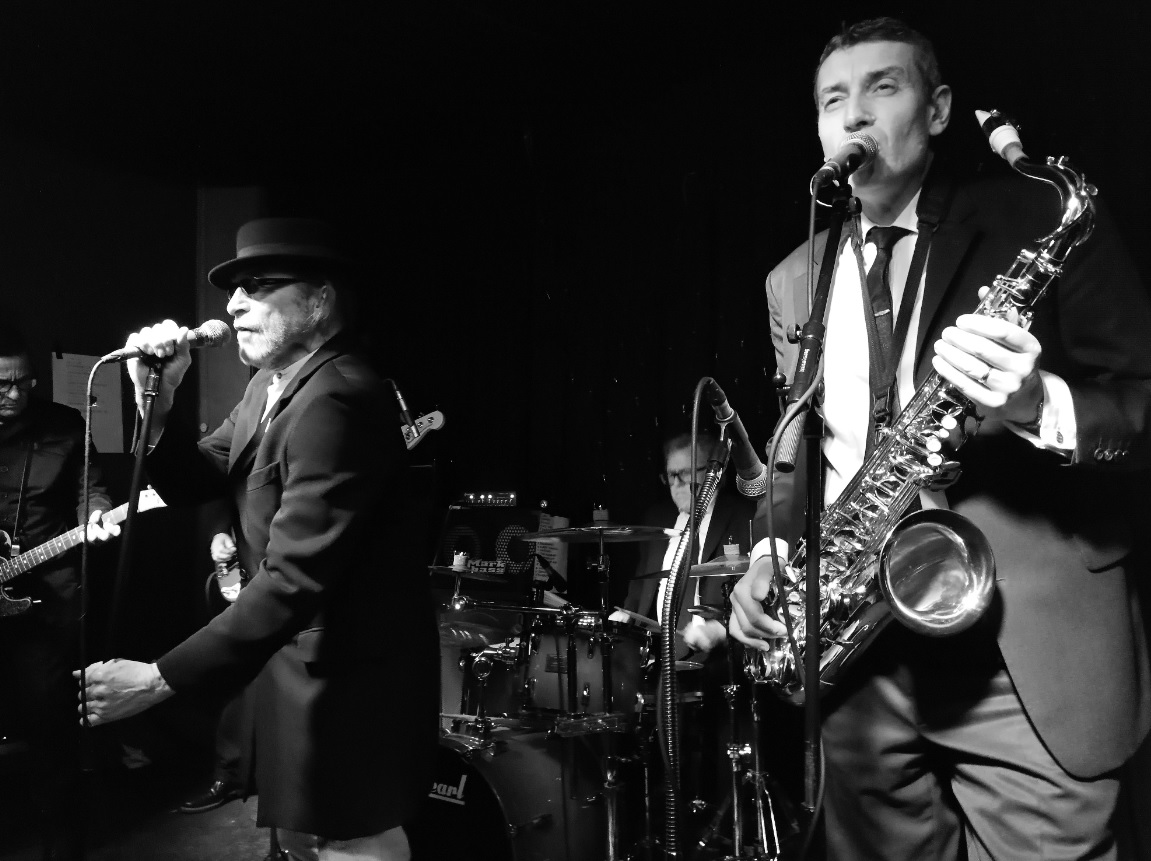 Prior to tonight’s concert lead singer ‎Darris Golinski‎ had posted…………………..
“I know I have said this at least twice before, and I should know by now never to say never, but I have a strong feeling that this really might be the last time Golinski Brothers get up on stage to tear the arse out of those songs we love so much. I look at YouTube videos of myself at one of the previous Albert gigs and I am pretty sure I can see definitive signs of ‘dad-dancing’! So undignified! So inelegant! Not getting any younger – will I never learn? NO!! Not this year anyway!! BUT this could be the last time – I don’t know!” 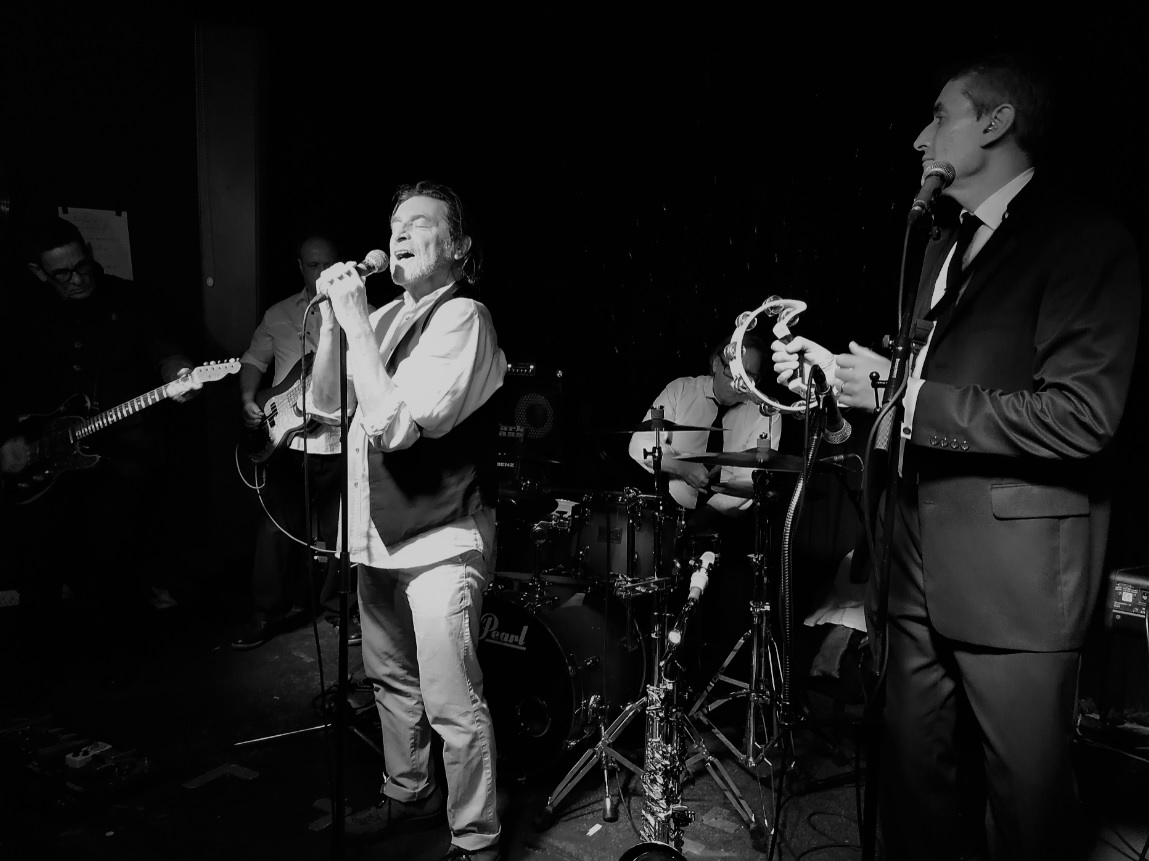 Tonight the six-piece band were smartly suited and booted and looking rather dapper indeed. Although I have to say that I thought that drummer Paul did seriously remind me of Jonathan Meades and that I half expected him to stand up with his hands by his side and spurt out long elaborate and thought provoking lines of inquisitive observations about Brutalist architecture. 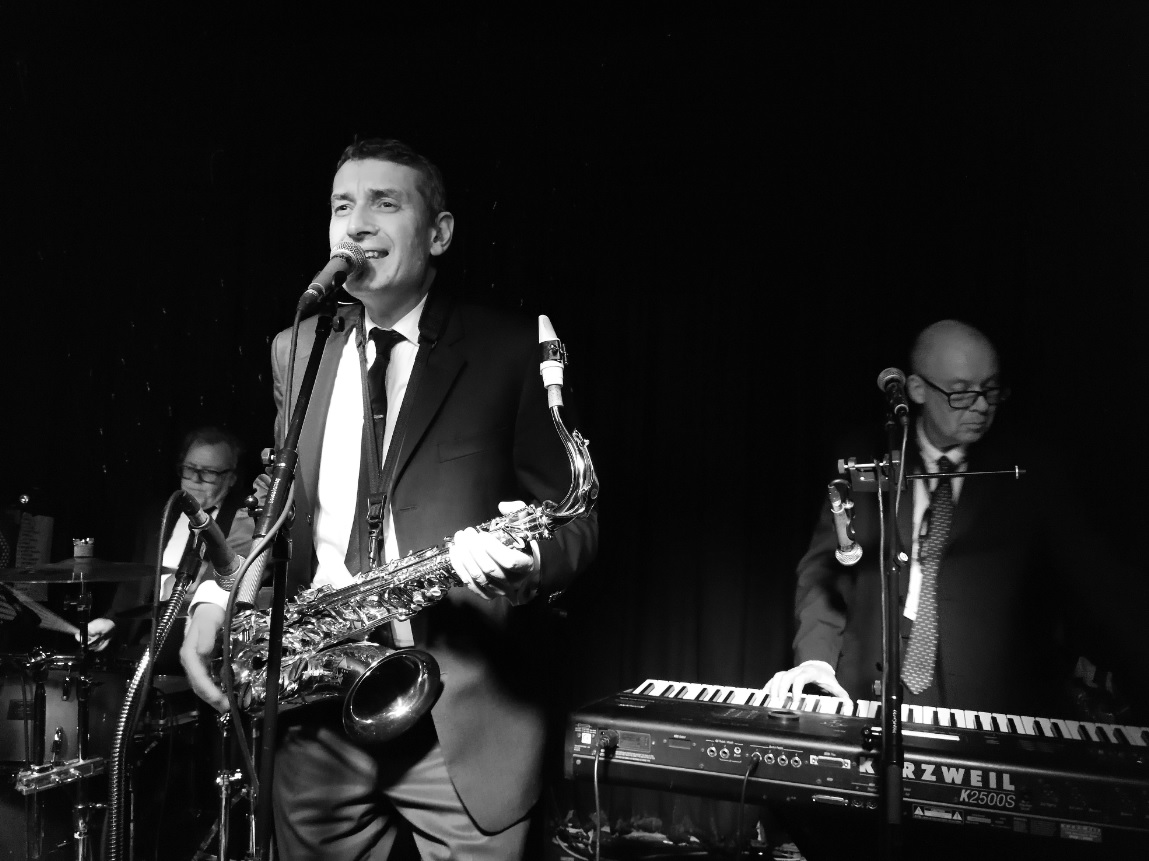 The guys were bowing out (or were they?) with a long 20 tune set of varied material which included original compositions as well as selected cover versions. I personally felt that some of the cover versions were hits, such as Patti Smith’s ‘Gloria’ (with its early Modern Lovers sounding keyboards) and Chuck Berry’s ‘Nadine’ but some were arguably slight misses with me, namely The Foundations ‘Build Me Up Buttercup’. 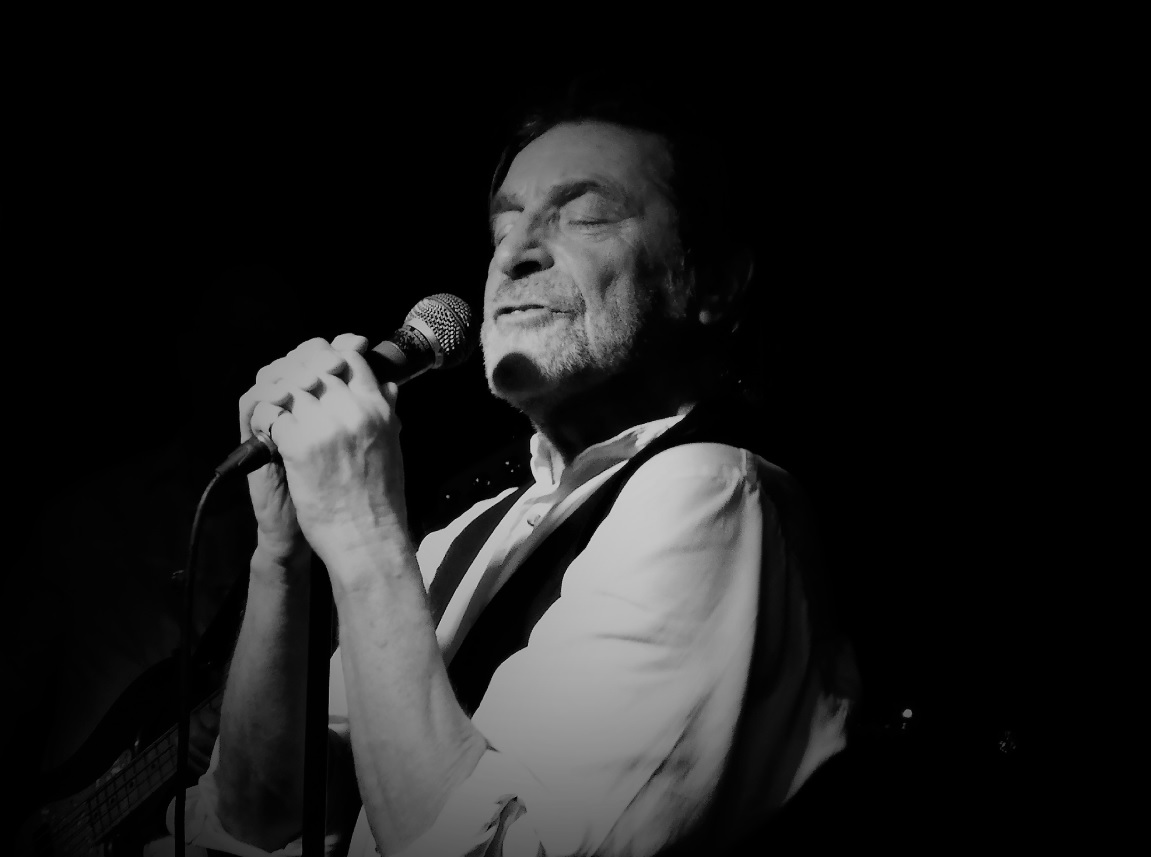 The Golinski’s sound flits between sounding like Dexys Midnight Runners, rhythm and blues, ska, reggae and even punk. We had ‘Sweet Jane’ which is akin to the Velvet Underground, ‘Lost Words’ was fab and reminded me of tunes that you would hear on the John Peel show back in the day, and ‘Silent Singer’ was very The Clash circa ‘London Calling’ and so was very good indeed. Not a fan of ‘Just Like Me’ with its nursery rhymes though. But hey, they did play ‘Bloody’ which was bloody good and the highlight of the set for me.

There you have it. Would I go again? Yes, but will they ever play live again? Time will tell eh lads!

For more information on the Golinski Brothers click HERE.
For further info on the Piranhas 4+, click HERE. 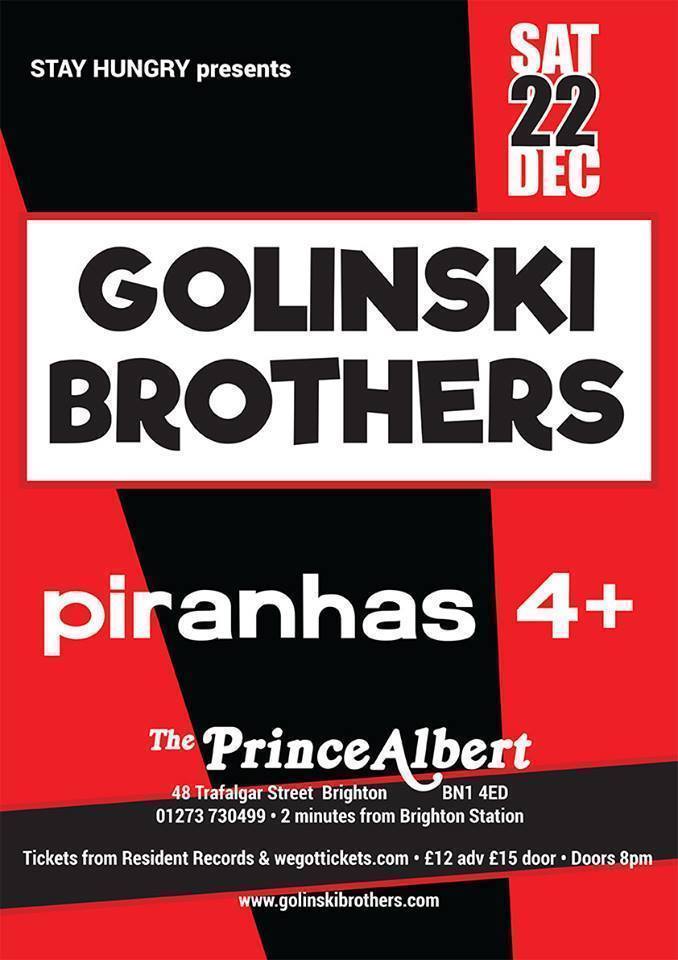 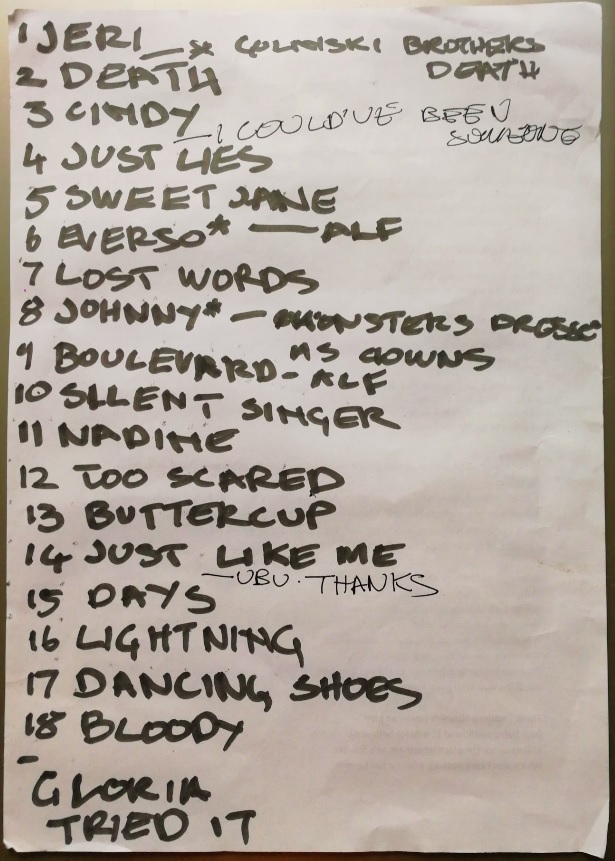 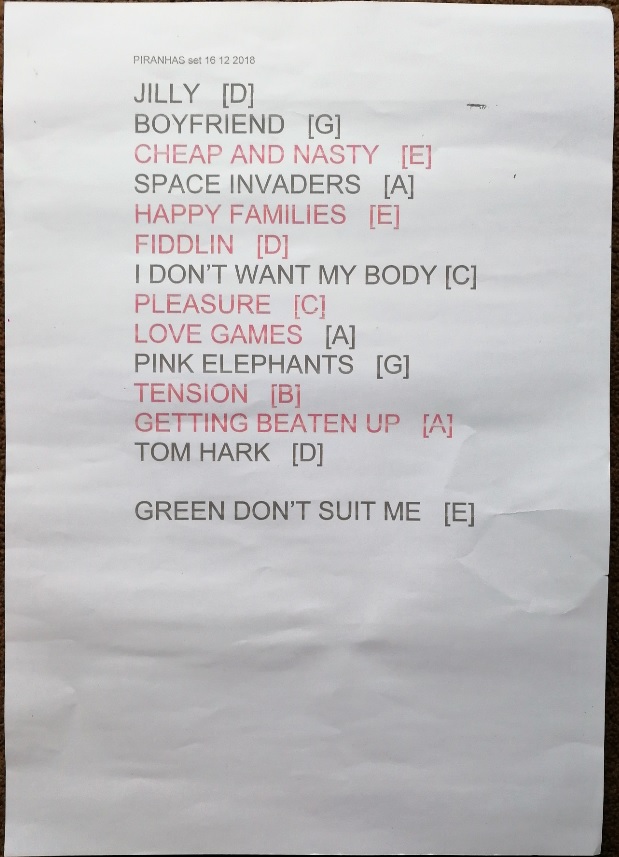