Nuffin’ happening in Bexhill? Oh yes there is! 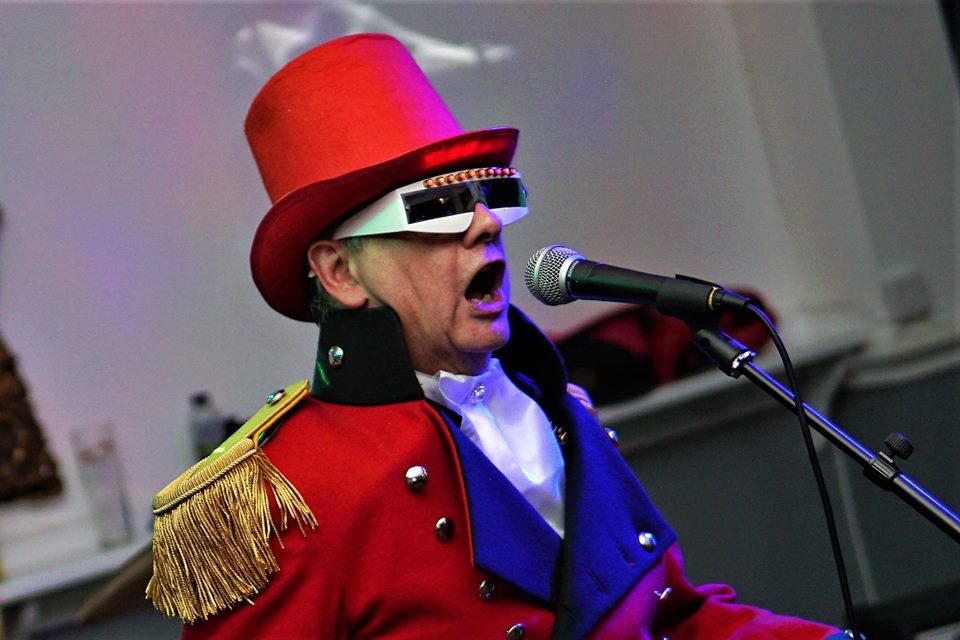 2018 saw the beginning of an extraordinary event at the Sussex Hotel in Bexhill-on-Sea on Friday nights. ‘Shawnie’ aka Shawn Wright had a brilliant idea to launch “Punk at the Sussex”. Shawnie started to attract some well known names in the world of punk, which I came across quite by accident. The end of 2018 saw legendary punk outfit ‘Control’ and the new upstarts ‘The Blue Carpet Band’ both perform at the venue.

Shawnie has been working tirelessly to attract more bands to play at the Sussex Hotel and so far he has events planned for nearly every Friday night going into April. To kick it all off for 2019, The first lineup last night was Rage DC, Surgery Without Research and ‘Nuffin’. I certainly wasn’t going to miss this one. 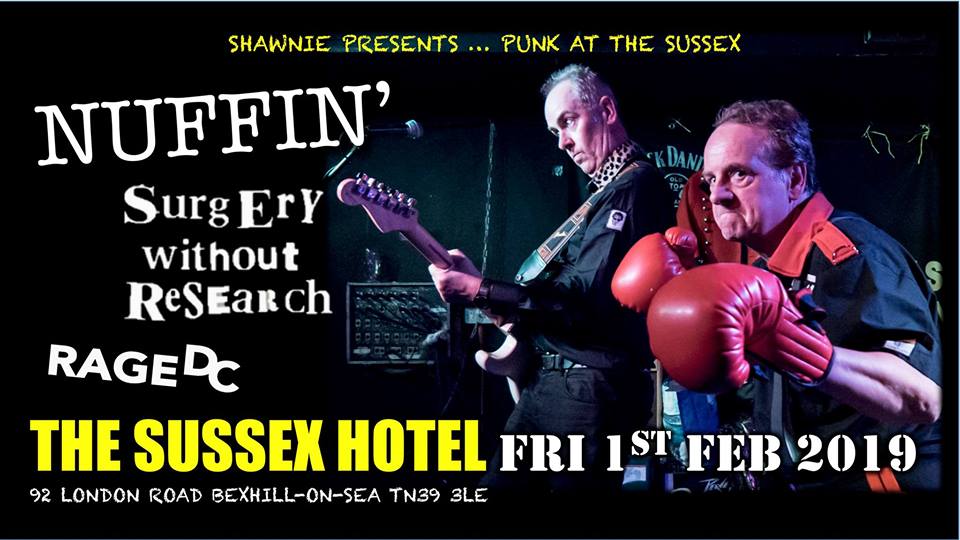 We set out on our 25 mile journey to Bexhill through the snow and the biting wind and arrived fairly early. Unfortunately Surgery Without Research were unable to make the gig and we would all like to send them our thoughts and wishes. But that said we still had two great bands to see and enjoy.

One of the great things about the Sussex is that you can relax and meet all the bands and I had a great time chatting to them and finding out about their history. I had a really great chat with Brian Damage who explained the history of ‘Nuffin’. Nuffin’ formed in Caterham in ‘76 and their ‘77 Their Roxy Club gig featured on London Weekend Televisions’s documentary “1977: The Year of Punk”. They continued to gig for the next year or so, and a 4-track demo was put down in 1979, but they disbanded in 1980. Nuffin’ are one of the only original bands from 1976 to have all 4 original members, which they are all very proud of. 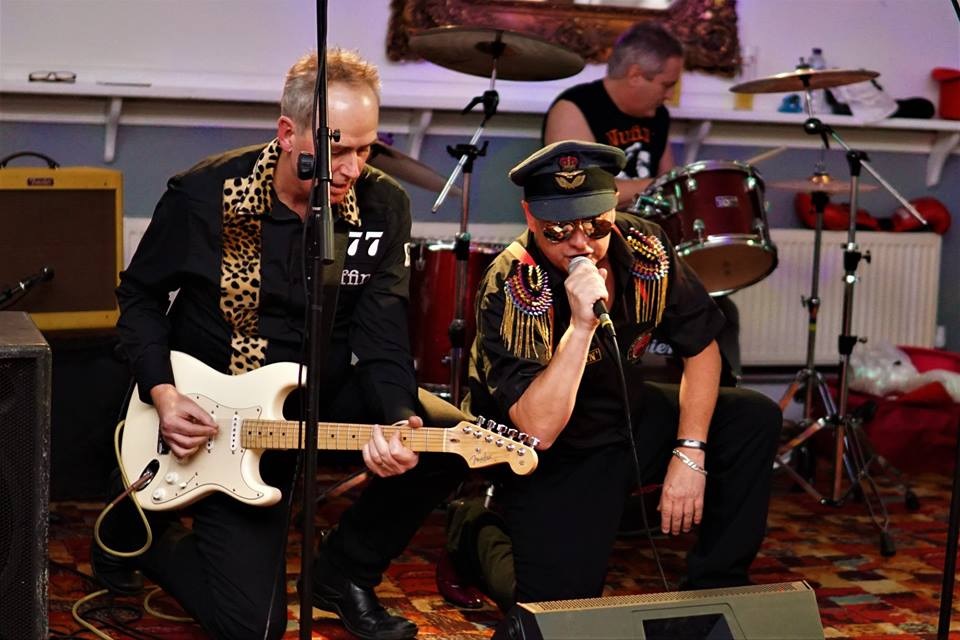 The band consists of Christopher Brown (vocals), Steve (‘Brian Damage’) Flynn (guitar/vocals), Paul Flynn (bass) and Neil Faulkner (drums/percussion/assorted guitars), who replaced Roger Bullen when he went off to join Eater in 1976 when Eater first gained a recording contract. They all reformed Nuffin’ in 2016 and their debut album ‘Crowd Control’ consists of a dozen originally penned tracks from 1975-79 and was finally released in 2018 after 41 years! Read more on their Facebook page. 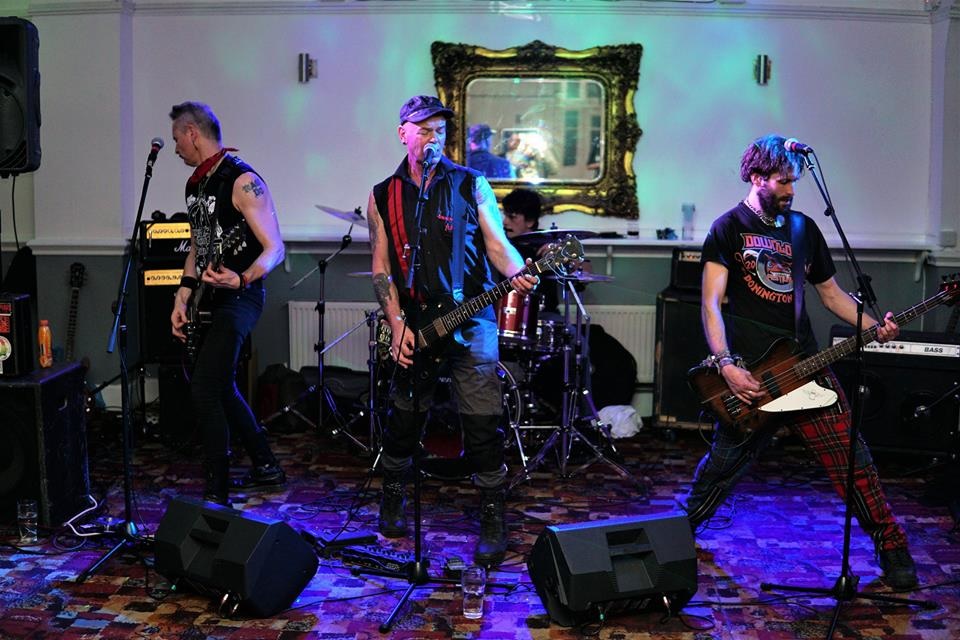 So, onto tonight and Rage DC were up first. They were originally formed in 1996 and I have seen them a couple of times before, one being at the Undercover festival a couple of years ago. The band are Simon Loric (lead guitar/vocals), Graham Pegler (rhythm guitar/vocals), Chris Surtees (bass guitar/backing vocals), and Ziggy Morbi (drums).

The musicianship of these guys is something to behold and from the very first number ‘RIP Mr VIP’ I was gripped. I didn’t remember how good they were. I made a mental note to make sure I bought their album at the Mercy stall. Next number was ‘Glad To Be Alive’ Simon is a great frontman and pushes the lyrics right at you. The whole set was brilliant and I can tell you that the album I purchased ‘Punk To The Bone’ is brilliant, especially played really loud. Glad to have seen them again and can’t wait to the next time. 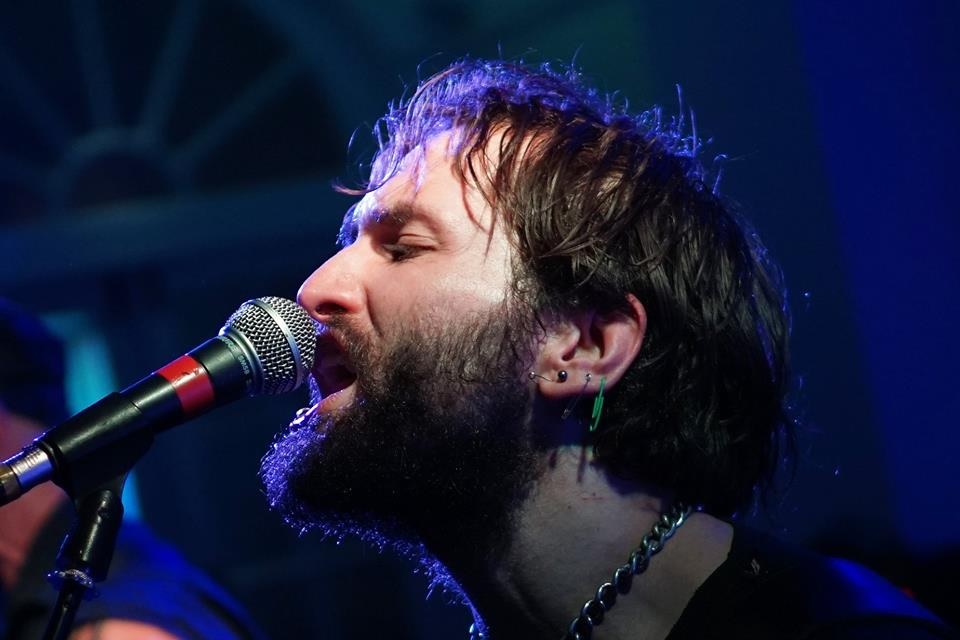 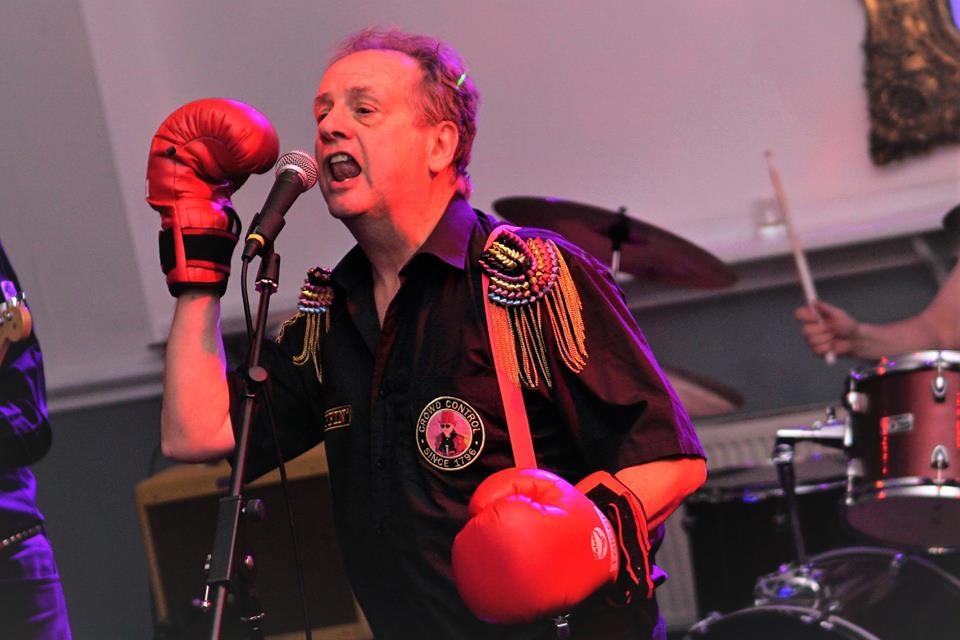 Next up tonight were ‘Nuffin’. I first saw them live at the tailend of last year, when they were supporting 999 in Brighton. They put on a great show and their history is quite amazing. Christopher Brown on vocals has enough charisma for 10 of us and is an absolutely brilliant frontman.

The set kicked off with ‘Red Day Blues’ followed by ‘SOS’. They sound real old school, but all the tunes are so catchy with brilliant delivery and showmanship. Chris donned a cape with lights for one of the numbers and ventured out into the crowd, which was awesome and funny. Next up was a crowd favourite ‘Garageland’ which was made famous by The Clash. Then came ‘Mandy, Tuesday Wendy’. This is so catchy and you just couldn’t help singing along with the band. 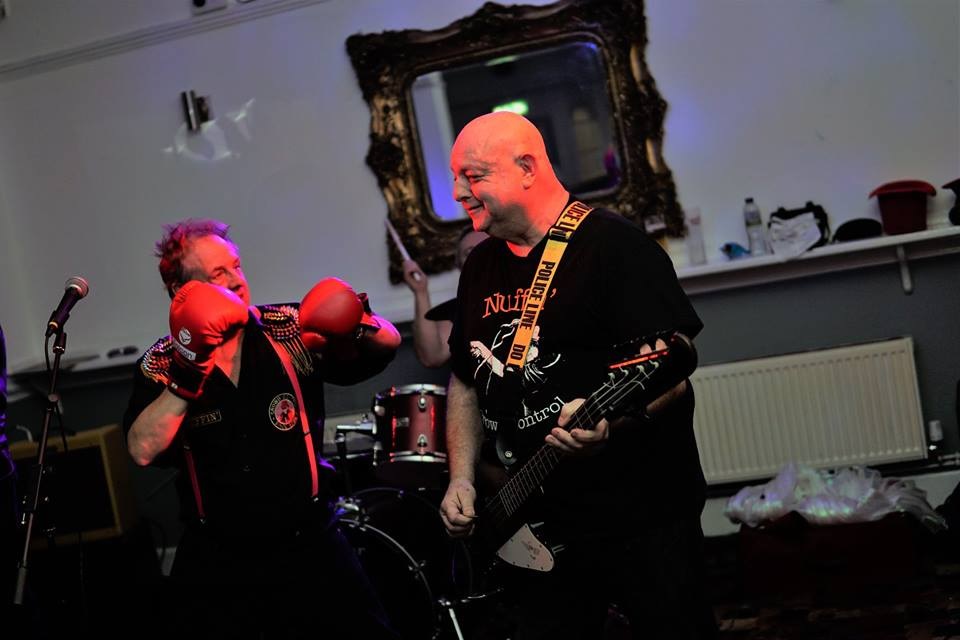 Chris put on a pair of boxing gloves for ‘Punk Enemy’, which was also really funny. I just love the fun of these guys. 41 years in the making and they have kept us waiting this long. I think they are awesome and love their show.

The highlight for me is ‘Crowd Control’, We were all given Police Hats and Helmets to wear for this number. I want to see them again real soon and want to thank them for making us all smile. 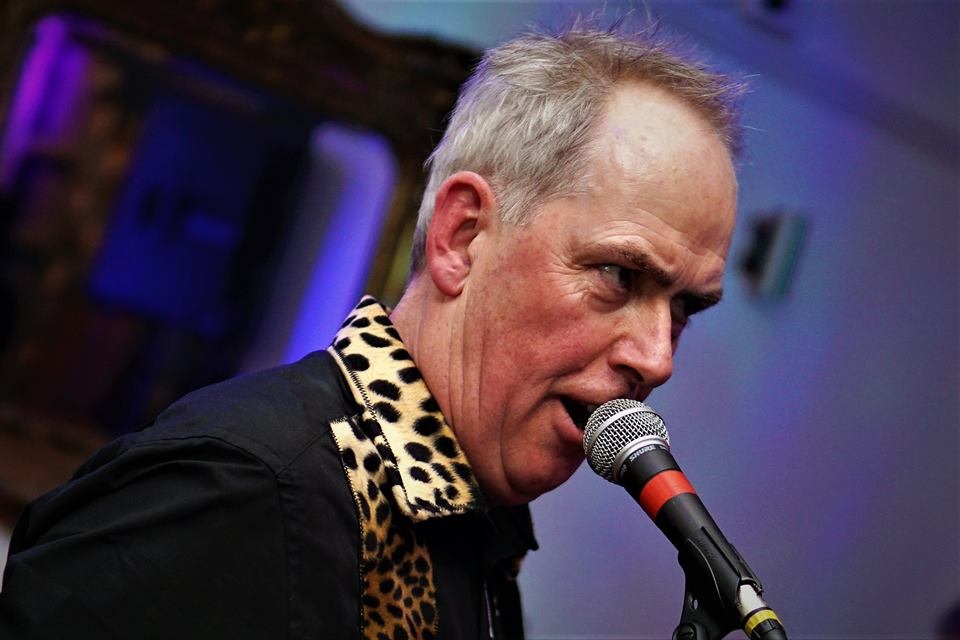 Loads more to come from Shawnie and ‘Punk at the Sussex’. Check on the Facebook page HERE.

More photos from the night can be found on Al’s Gig Photos Facebook page. 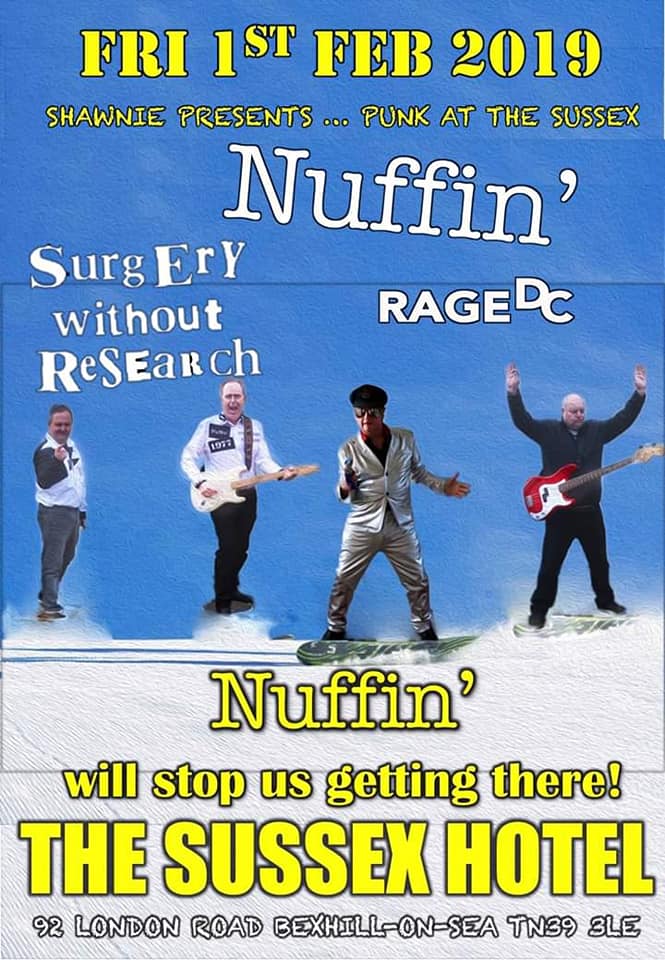 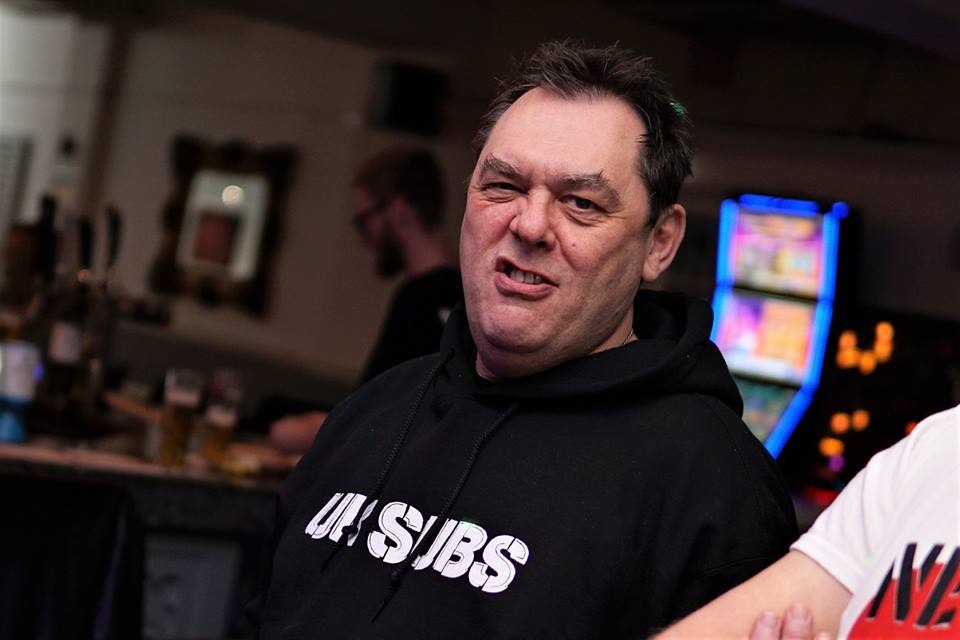