A group that has previously opened the Cambridge Folk Festival will play at the Brighton Acoustic Club this evening (Monday 4 February). 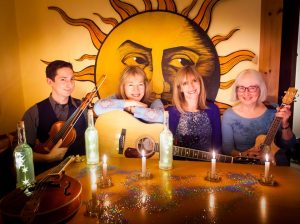 “Sara and Mary began singing together after meeting at Cecil Sharp House in 1996.

“The following year they made their first demo at Dave Pegg’s Woodwork Studios and Suntrap have gone on to make four highly regarded CDs, the most recent of these released on Fellside Recordings.

“They have played all over the UK and Europe at major folk festivals, folk clubs and art centres.

“The band have been privileged to open Cambridge and Warwick Folk Festivals.

“As always, floor singers are welcome. We hope to see you there.”

Admission is free for the session this evening although donations are encouraged.

It starts at 8pm at the Lord Nelson pub in Trafalgar Street, Brighton.