They were joined by volunteers and staff from Brighton charity Possability People.

The charity said that its advice centre was at risk of closure after an 85 per cent cut in funding from the Brighton and Hove Clinical Commissioning Group (CCG).

The matter was raised in the House of Commons earlier this week when the Labour MP for Brighton Kemptown, Lloyd Russell-Moyle, raised it with Health Minister Caroline Dinenage.

Today councillors handed the protesters a copy of letter of support addressed to the CCG’s clinical chair, Dr David Supple.

The letter said: “We, the undersigned, are Brighton and Hove City Councillors. We are deeply concerned at the significant impact of the decision of Brighton and Hove CCG to remove its share of funding from the Disability Advice Centre run by Possability People.

“We recognise that the barriers to accessing services and adequate income to those living with disabilities are among the most challenging faced across our communities and that relative poverty and lack of information are both serious contributing factors to ill-health, disease and social isolation.

“We welcome the ongoing commitment of Brighton and Hove City Council to maintain its funding but are concerned that this represents less than 20 per cent of last year’s total funding.

“We call on the CCG to

4 Attend the next Health Overview and Scrutiny Committee to explain the full background to this decision, their plans to mitigate the effect and their options to reverse the decision”

The Greens said: “Possability People may be forced to close the only specialist disability advice centre in the city.

“The decision, which has provoked widespread condemnation from local organisations and service users, was first communicated to Possability People in a joint letter signed by both Brighton and Hove City Council and the clinical commissioning group. 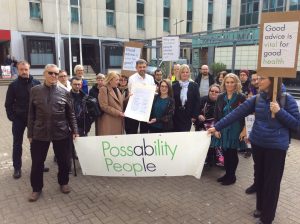 “The letter gave Possability People just three weeks’ notice of the termination of funding and states that ‘Brighton and Hove City Council understands the decision made by the CCG’.

“Green councillors have slammed the Labour council for attempting to ‘create distance’ from the decision despite their critical role as health partners to the CCG, labelling the last-minute statement as ‘too little, too late’.

“Expressing their support for Possability People, Greens say the Labour council must do everything possible to mitigate and reverse the damaging cut.”

Councillor Phélim Mac Cafferty said: “There has been an attempt to distance the Labour council from this decision, but the council can’t claim it’s not involved.

“It has co-signed the letter that went to Possability People decimating their funding.

“The city council under Labour’s leadership only gave three weeks of notice that this desperately needed funding is running out.

“This isn’t the way to treat a charity helping some of our most marginalised residents. There’s no consultation or right to appeal on that either.

“It’s absolutely damning that the Labour leadership has remained silent on this issue until it was facing a public protest at today’s council meeting.

“This is not the first time a short-sighted funding decision has hit some of our most vulnerable – the council moved to stop the Low Vision Service from closure after CCG cuts, for example.

“The Labour administration should be looking for every possible opportunity to support this vital service and get the CCG to reverse this decision.

“While today’s sudden statement from Labour to health authorities is welcome, Labour’s starting point in this discussion – that they ‘understand the position of the CCG’ rather than condemn or reject it – has contributed to this poor outcome.

“Greens including MP Caroline Lucas have been working behind the scenes to support the organisation and push for action and will continue to do so.”

Councillor Pete West, Green spokesperson for Neighbourhoods, Inclusion, Communities and Equalities, added: “We absolutely reject the CCG’s assertion that these services are provided elsewhere – Possability People has been running the advice work for 30 years and they are the city’s only specialist disability advice service.

“Greens fully support this much-needed organisation. In the past year alone this charity dealt with over 4,500 inquiries and demand is rising.

“This Labour council needs to acknowledge their leadership role and act urgently to explore all options for funding and support for Possability People.

“The funding runs out in a matter of days and unfortunately, despite today’s last-minute statement, drawn up by Labour councillors spooked by protests, we remain concerned that this sudden statement says too little, too late.”

Brighton and Hove CCG said: “Across the NHS there are more and more people who need to use health services and the funding available to pay for them cannot keep up with this increase in demand.

“This means we have to focus NHS funding on supporting services which have been proven to have the most impact on people’s health and that are not already provided in the community.

“Over 80 per cent of contacts for this service are related to benefits help and Brighton and Hove has a wide range of other community and voluntary sector services that support people with these needs.

“There are also a number of both local and national services that offer benefits advice and help in accessible ways.

“With this in mind, we took the difficult decision to reinvest the money that would have been spent for this service into other services that will bring direct benefits to more people’s health needs.

“This was not a decision we took lightly but we feel it is necessary to ensure we are able to continue to use public money in the most effective way and do not spend more money than we have available.

“We recognise the valuable support provided by the Disability Advice Centre to disabled people in the city, particularly in relation to accessing benefits.

“Going forward, we will continue to work with our local authority colleagues and the voluntary and community sector to maximise the support provided to our diverse local population and to ensure that our investment of NHS funding supports and complements, rather than duplicates, other statutory and voluntary sector services.”