‘The doctors told us she wouldn’t make it’: Father of three-year-old hit by falling timber tells how family has been devastated 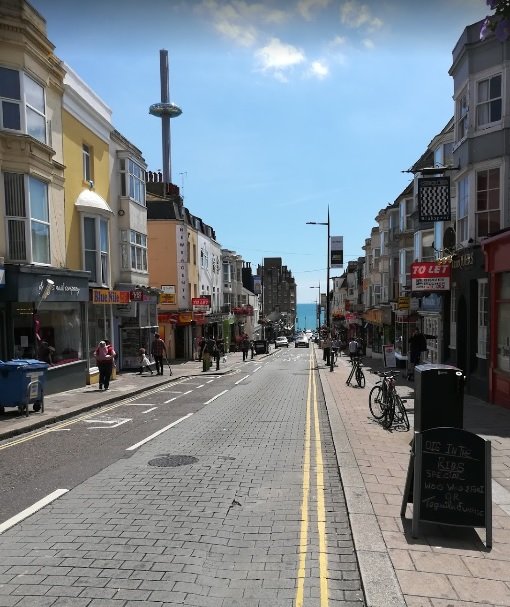 A father whose three-year-old daughter was left with life-changing injuries when she was struck by falling timber told how her family has been devastated today.

The young girl, who cannot be named for legal reasons, was being pushed along Preston Street in a buggy by her mother on the way to the Kings Road playground to play in the paddling pool on a hot day last July.

But as they walked past some scaffolding, a 3.5m length of timber being lifted came loose and smashed into the buggy, fracturing the little girl’s skull.

Today, Grzegorz Glowacki, 40, of Rugby Road, Brighton, pleaded guilty at Brighton Magistrates Court to failing to ensure a lifting operation was properly planned, appropriately supervised and carried out in a safe manner.

He now faces a prison sentence of up to two years and an unlimited fine.

The court was read a statement from the girl’s father, who lives with his wife and daughter in Lancing, detailing his daughter’s devastating injuries – and remarkable recovery.

He said: “My wife called me and said my daughter was alive, but there had been an accident – it’s really bad. Some Wood has hit her on the head, you’ve got to come. I could hear my daughter crying in the background.

“I got to the Royal Sussex and my wife was covered in blood – my daughter’s blood. My daughter was laying down, her head swollen and making a shrieking noise that will haunt me for the rest of my life.

“I stroked her head and told her it was going to okay. I suspected I was lying to her.”

He said that doctors would come up to them giving them bad news after bad news, that she might not survive or that she was likely to have permanent disabilities, and he and his wife would be holding each other crying on the floor.

Although they are not religious, they asked their friends to pray for their daughter.

Later, the girl was set to be transferred to a specialist unit at Southampton General Hospital.

The father said: “We were approached by a consultant. She advised us to travel in the ambulance because the likelihood was that our daughter would probably die before we got to Southampton.

“My wife and I spent the next few minutes lying in the corridor crying in each other’s arms.

“In the ambulance, I mostly just stared at my daughter’s left foot, preparing myself for the moment that we would pull to the side in some random town and we would have to say goodbye to her for the last time.”

But for the first time, but by no means the last, the little girl defied the doctor’s worst expectations and made it to Southampton where she gradually started her incredible recovery.

She stayed in hospital for four months, and was then transferred to a specialist rehabilitation unit.

Although she still has some weakness to the left side of her body, she is now able to walk.

Although the damage to her brain means there is a chance she may have difficulty with problem solving skills, it is too early to tell and she has now started school for one day a week with the aim of moving to full time soon.

The court also heard a more up to date statement from her grandmother, who was present in court, and who said: “The doctors are in awe of the progress she has made.”

Prosecuting on behalf of the HSE, Briony Clarke said the accident happened because Glowacki had failed to secure the wood properly and had not prevented pedestrians from walking underneath while the 12 pieces of timber were being lifted.

His colleague had been at the top of the scaffolding operating a pulley while he tied the wood using a single knot at the bottom. Five pieces of timber had been successfully lifted before the sixth one fell as the little girl and her mother walked beneath.

She said: “It was a case where he simply didn’t turn his mind to the task at hand and so it wasn’t planned, supervised or carried out in a safe way . . . This was obviously an unsafe environment.”

After the accident happened, Glowacki had spoken to police and attempted to give his details to the girl’s mother, but then left the scene. He was pursued by police and arrested, along with his colleague. No action was taken against the colleague, who became a witness for the HSE.

Witness statements from members of the public were also read out. One, from a Mr Branville, said: “I thought to myself that’s not right … no one’s trying to stop people walking underneath pieces of wood being lifted. It was an accident waiting to happen.”

Another said: “It looked all wrong – the wood was pretty much vertical.”

Defending, John Williams said: “Grzegorz deeply regrets this offence. He’s truly sorry for what happened. He has instructed me in very clear terms to apologise both to the family and to the court.”

He also read out a character reference from a client who said Glowacki had told him the “awful event constantly plays on his mind and he will never forget it and it will haunt him forever.”

Glowacki, who previuosly mainly worked as a painter and decorator and had no great experience or training in lifting heavy objects, is now working for a firm in Southampton and adhering to their health and safety regime.

District Judge Tessa Szagun told Glowacki that she was considering a prison sentence and may yet commit the case to crown court, but adjourned the hearing so that probation could prepare pre-sentencing reports.

She said: “Nothing that can be said either by way of an apology from Mr Glowacki or by any sentence that I ultimately impose or remarks that I make in sentencing can have any impact at all on how this family has been devastated and impacted by this incident.

“It’s not possible for anyone who has been here in court today to fail to be moved significantly by the articulate and extremely heart rending statement that must have been so painful to have been prepared by the father describing the real torture suffered by them all.

“I shall take proper account of that in balancing the ultimate sentence decision that I make.”

Glowacki will next appear at Brighton Magistrates Court on June 4.