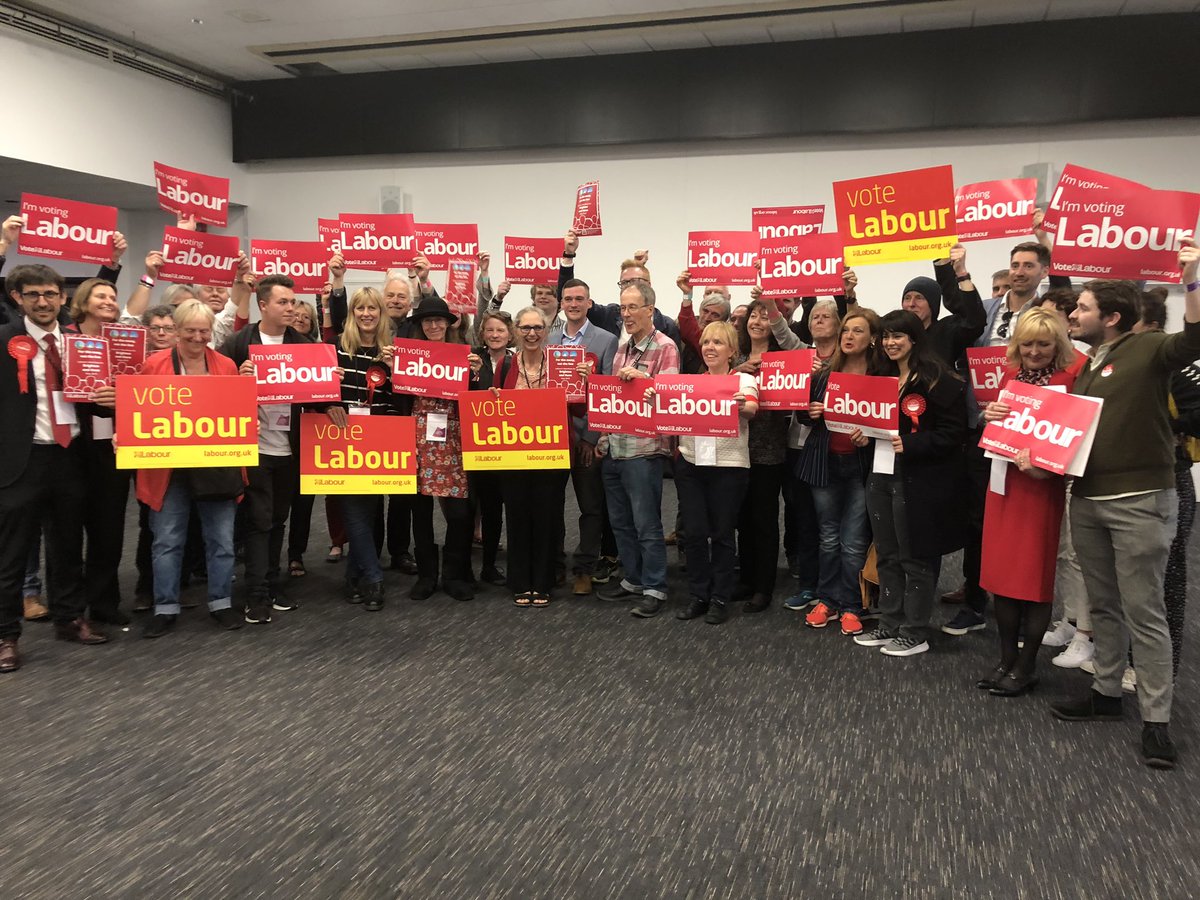 Brighton and Hove Labour celebrates its 20 seats at the May 8 count. By local democracy reporter Sarah Booker-Lewis

This was to have been the election that delivered Brighton and Hove’s first majority socialist council. So while congratulations to the successful Labour candidates who did win is clearly the order of the day, its also important to reflect on why the party fell short of its target.

This will be painful, not least for ousted councillors, candidates who lost out and the party activists who worked hard during the campaign despite reservations about what has been happening in the party locally and nationally over recent months.

But, if we want to move forward, we have to reflect on where we went wrong, as well as what went right. To kick this off, here are five urgent lessons that we should take from the results as we head into the European parliamentary elections and a still possible snap general election.

First, fence-sitting on Brexit was always going to play out badly for us and will continue to be until we can properly reflect where electorate is in our city. That means unequivocal support for the proposition that the people should have a final say — with remain as an option on the ballot paper.

Look at Cambridge, another strongly pro-remain city where Labour held the council yesterday. The party’s manifesto included a pledge from council candidates to use their influence (working alongside their MP) to stand up for a second vote with the option to remain.

Is it any surprise that we performed better in Hove, where Peter Kyle is a high-profile Remainer? I don’t think it is.

Signalling to the city we get where they are coming from on this issue over coming weeks should involve putting ourselves in the forefront of efforts to change the party’s policy nationally. If we don’t, the consequences for the party here and indeed nationally are of an existential nature.

Secondly, we will continue to put off key groups of voters (and activists) until we have faced up to and completely resolved anti-semitism problem in our party. This ongoing crisis has continued to give an ugly but tragically accurate taint to the party’s identity in the city and nationally.

The frequency with which one still sees the argument that this is merely an issue with which to attack Jeremy Corbyn, and the expressions of solidarity from leading lights in this city with those who are suspended for anti-semitic comments, shows how difficult this will be.

Ultimately, we need more whistleblowing by the decent majority, monitoring of social media sites, extensive use of disciplinary procedures and compulsory education for all office holders.

Third, trashing the record of the previous administration and harassing and pushing out existing councillors was a huge political mistake that prevented us from making at least some of the gains we might have made. The people who led this divisive initiative need to be removed from positions of influence.

There is a quite a lot of data to show that incumbency bestows an electoral advantage, especially when there is a track record of success in delivering against a previous manifesto and recognisable political and community leaders.

The powers that be of course, trashed a decent record and opted instead for something far less tangible, that is less likely to be delivered now anyway. To make matters worse, it was clear that the move was political / ideological, rather than a move that put the city first.

This was unforgivable self indulgence. The people in our communities who would benefit most from a Labour council now pay the price.

Fourth, the failure to build momentum towards winning a majority is a good example of what happens when a local political party gets its priorities wrong.

Too many of the Labour and Momentum activists in positions of influence have made faction fighting their priority. Of course the only priority for us should be securing office so that we can make a difference to the people of the city.

Until we achieve unity, and show the people of the city that representing them is our true passion, we won’t move further forward.

Fifth, campaign organisation is too important to be left to the ideologues. When it is, as was in important respects during this election, it’s hard to achieve the kind of high-profile, joined up campaign that will help us make gains.

Look at what the Greens achieved this time. They were unified, co-ordinated and coherent. Just take a look at their social media output.

In many ways their triumph of our Labour winners is all greater because they managed to win despite the litany of stupidity: the refusal of some activists to deliver leaflets showing the success of the previous administration’s housing policy (wasting hundreds of pounds in the process), the boycotting a phone bank because it was run by someone who had campaigned against a Momentum slate, literature that only featured some of the candidates because the Momentum people didn’t like their running mate, the confusing set up of separate Momentum and Labour campaign structures and the postal vote application letters arriving the day postal vote applications closed.

It’s clearly not all gloom and doom. We are still, just about, the biggest party. Many of the winning candidates are going to be brilliant councillors.

I’m looking forward over coming days to hearing about what they thought worked and should be built upon. That, combined with the lessons above, is how we move forward.