Brighton and Hove Buses has spent more than £9 million on 30 new electric buses with an extended range as the company aims to cut its carbon footprint. 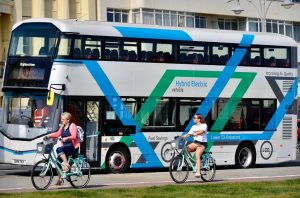 The company said that the new fleet also had no wing mirrors, relying instead on high-definition digital cameras to eliminate blindspots.

It said that the new buses would be out on one of the company’s most popular routes by September.

Brighton and Hove Buses said: “Crucially, these buses can be set to run in zero-emissions mode throughout Brighton and Hove’s Ultra Low Emission Zone (ULEZ), which includes North Street. This technique is called geofencing.”

The company is splashing out £9.2 million on the extended-range electric Euro VI micro hybrid buses, which are made by Alexander Dennis Limited and BAE.

It said: “These UK-built buses are fully electric – the electric motor drives the bus at all times – and they use a small diesel generator to top up the battery. Regenerative braking does most of this topping up.

“When the buses are running in zero-emissions mode not even the generator will be operating.

“They’ll be introduced on route 5, one of the city’s busiest bus routes, which serves areas including Hove, Hollingbury, Hangleton, Preston Park and Patcham.

“Buses with this technology use fuel very efficiently, reducing the carbon emissions that contribute to climate change and cutting our fleet’s carbon footprint.

“Two high-definition digital cameras on the front of the bus give drivers a wider-angled view of the road and better depth of field via two monitors inside the driver’s cab.

“It’s the largest order to date of a mirrorless camera monitoring system being used commercially in the UK.”

He said: “The peripheral view and the clarity of the picture on the monitors is far better than normal mirrors.

“It’s much easier to spot a bike coming down the side of the vehicle, for example. It shows it from a long way away.”

The company said: “Drivers will no longer have to deal with reflection or glare from the sun on their wing mirrors and driving at night or in the rain is much easier as the cameras automatically adjust to changing light conditions.

“The mirrorless system does away with the possibility of mirrors being affected by condensation or ice because the cameras have their own heating mechanism to stop this from happening.

“A demonstration bus, featuring the SmartVision mirrorless camera system, distributed by 21st Century in the UK, arrived at our Hove bus depot last week, giving drivers the chance to try it out.”

Bus driver and Unite the Union representative Mark Baldey drove the demonstration bus and was impressed by the results.

He said: “The picture quality is amazing and the angle is much wider.”