Health chiefs are planning to improve maternity services, prompted by an official report and the rising cost of premiums paid to a “clinical negligence” compensation scheme.

They aim to offer more choice to expectant mothers across Brighton and Hove and the surrounding area – and more of a focus on mothers’ mental health.

In the next five to six years they are keen to halve the number of “perinatal deaths” – those happening between 22 weeks into a pregnancy and within a week of birth.

At the moment the perinatal mortality rate in Brighton and Hove is 5.53 for every 1,000 live births – or more than one a month.

Health chiefs’ plans were set out in a report to the Brighton and Hove Clinical Commissioning Group (CCG) at a meeting at the Brighthelm Centre yesterday (Wednesday 3 July).

The governing body meeting was told that the Local Maternity System Plan spelt out how NHS bosses in Sussex and East Surrey would deliver “the national vision for maternity services”.

At the CCG meeting, Maggie Keating, the Sussex and East Surrey Sustainability and Transformation Partnership (STP) urgent and emergency care programme director, said: “We need to provide a service that is kind – a new emerging word in the NHS – professional and safe.

“It builds on previous policies about giving women a personal choice.

“We are building on a really good foundation when we look at our maternity services. In the region we have two that are outstanding and two that are good.

“Our mortality rate is below the national average. That sounds great but we know when we compare with our European colleagues there is so much more we can do.”

Maternity services at the Royal Sussex County Hospital in Brighton currently have a good rating from the Care Quality Commission (CQC), with the service’s effectiveness ranked as outstanding. More than 3,000 babies are born there each year.

But health chiefs want to reduce the number of babies stillborn, dying shortly after birth or living with expensive long-term conditions. 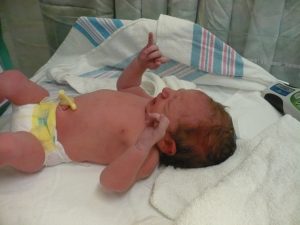 The report on the Local Maternity System said: “The costs of maternity care are rising.”

It cited higher premium payments to the Clinical Negligence Scheme for Trusts (CNST) which funds compensation for life-changing injuries caused at birth such as brain damage.

Without changing the way that it works, the NHS locally can expect to be paying £6 million to £8 million more a year in five years’ time.

The report said: “The main driver for this is increasing CNST contributions, with only minor contributions from growing birth rates, increasing complexity and inflation.

“The case for improving quality is clear. In aggregate, poor perinatal outcomes lead to very significant costs to the system.

“Provider contributions take account of the value of negligence claims brought against provider organisations and the value of known outstanding claims.

“While increases in average negligence payments may make absolute reductions in CNST contributions difficult, improving outcomes and avoiding adverse incidents can be expected to reduce CNST contributions relative to a ‘do nothing’ scenario.

“Based on national estimates, PBI incidence in Sussex and East Surrey may be around 100 births a year. Total costs of care following PBI are difficult to establish.

“Conditions resulting from PBI include cerebral palsy, intellectual disability, deafness and blindness, and can lead to significant and continued costs throughout the life of the individual.

“The value at stake in avoiding such incidents is significant in every sense.”

Among the challenges facing the NHS across the area is a shortage of ultrasound experts who can carry out scans to check foetal growth and movement. A key way of spotting whether a baby is in trouble is if it moves less or stops moving in the womb.

Brighton and Hove also has more older first-time mothers than average – and medics are expected to pay closer attention to pregnant women who are obese or who have drink or drug problems.

The number of teenage pregnancies in Brighton and Hove has tumbled after a sustained and concerted effort – and the rate of smokers who give up during pregnancy is above the national average.

Breastfeeding take-up is also high but almost one in three babies are delivered by caesarean section, with the 30.4 per cent rate comparing with a national average of 25 per cent.

The Local Maternity System Plan was approved by the CCG’s governing body.