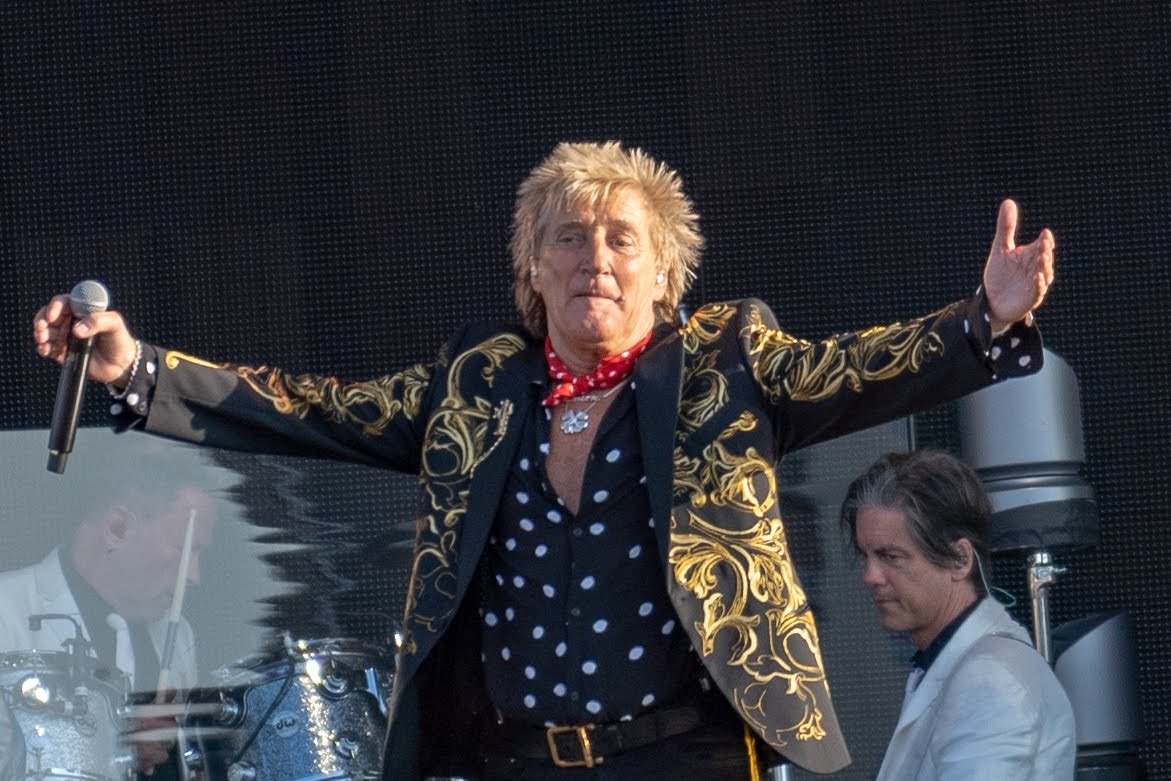 Let’s face it Sir Roderick David Stewart CBE (that’s Rod Stewart to all us lot) is a legend! I mean the bloke has sold more than 100 million records worldwide! So it would surely be rude not to check out his capacity crowd glitzy performance at the Sussex County Cricket Ground in Hove.

I have seen many hundreds of musical artists play live, but this was my very first encounter with Rod. Yes I know shame on me and all that, but to be totally honest, there have been times in my life when I certainly wouldn’t have bothered going to see him, but after attending concerts for over 40 years, I thought a live encounter with Rod was certainly overdue!

He has a true loyal following and listening to the fans talking today, it’s clear that several of them travel the globe in order to be a part of the Rod experience. Having now seen him live, I can understand why they do this. Tonight’s show was a spectacular event and the giant screens behind Rod and his band were really crisp and grabbed your attention. I had to keep remembering to look down at the ‘physical Rod’ as opposed to the ones on the screens. 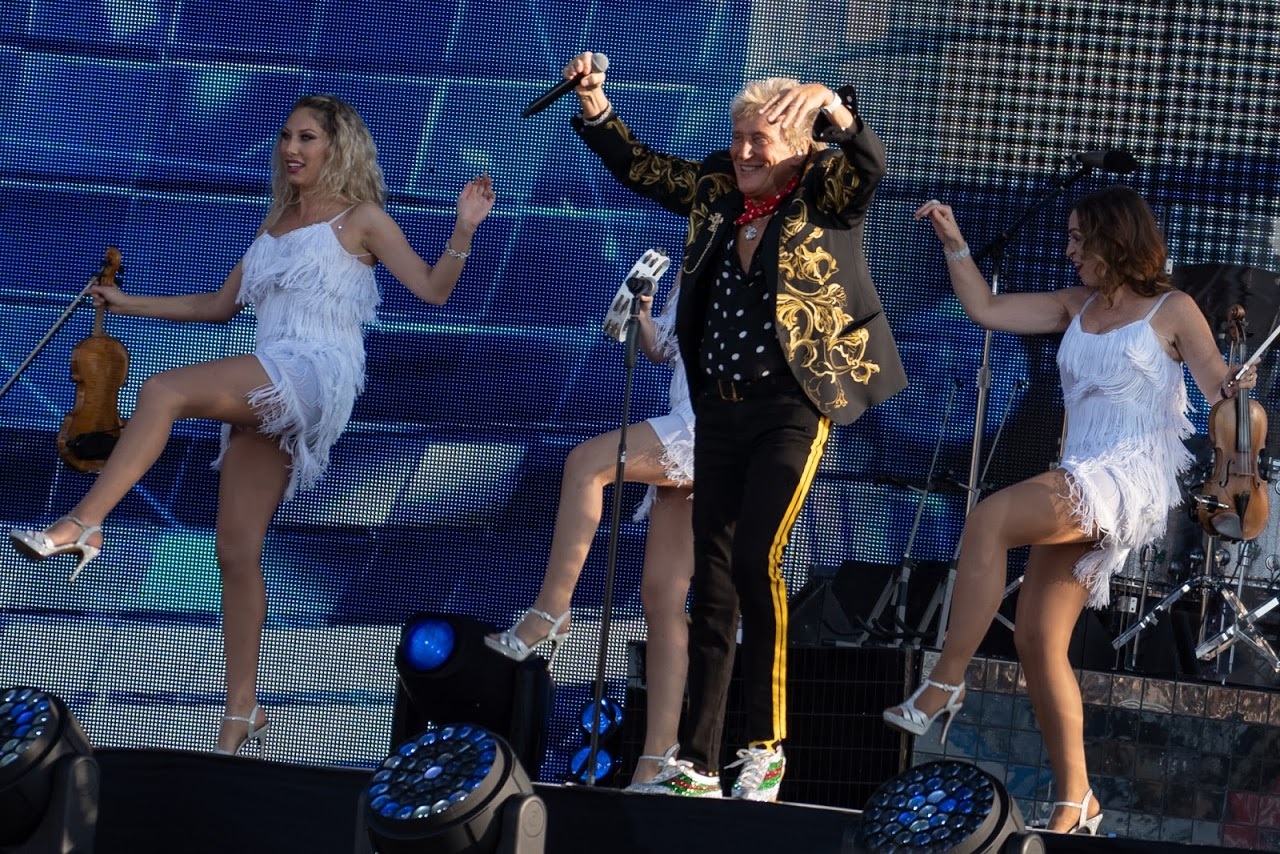 The Sussex weather was perfect and the happy crowd gathered inside the ground as well as every balcony outside the ground too. In fact both Rod and support artist Johnny Mac were jovially ribbing those on the various balconies and the film cameras present were at times picking out these lucky souls. ‘Pay Me My Money Down’ Johnny bellowed at those on the balconies. Having said that, some people must have purchased the various flats in the first place – a tad more expensive than a concert ticket.

The thing that I noticed first was that ‘Mr Gravelvoice’ certainly hadn’t changed much in appearance over the past decades. He used to look rugged back in the day, but now, I kept thinking to myself, how on earth is this bloke 74 years old. When I was tiny, someone being 74 was ancient and decrepit, and yet here’s this cheeky geezer swanning around the stage as though he is half his age. It’s amazing to think that ‘Rod The Mod’ was actually born during the Second World War.

Punters tonight were treated to two dozen selected tracks spanning his career from 1969 to 2018. It was not a routine Greatest Hits collection, but I would suggest carefully planned and choreographed numbers that would keep the true fans truly entertained. The sets on this current ‘Blood Red Roses’ tour have been slightly different each night and thus keeps the backing band on their toes, as well as Rod himself. His backing musicians as you would expect all know exactly what they are doing and where on the stage for each different number. This was pure showbiz and we even had a Vegas backdrop during one of the numbers. 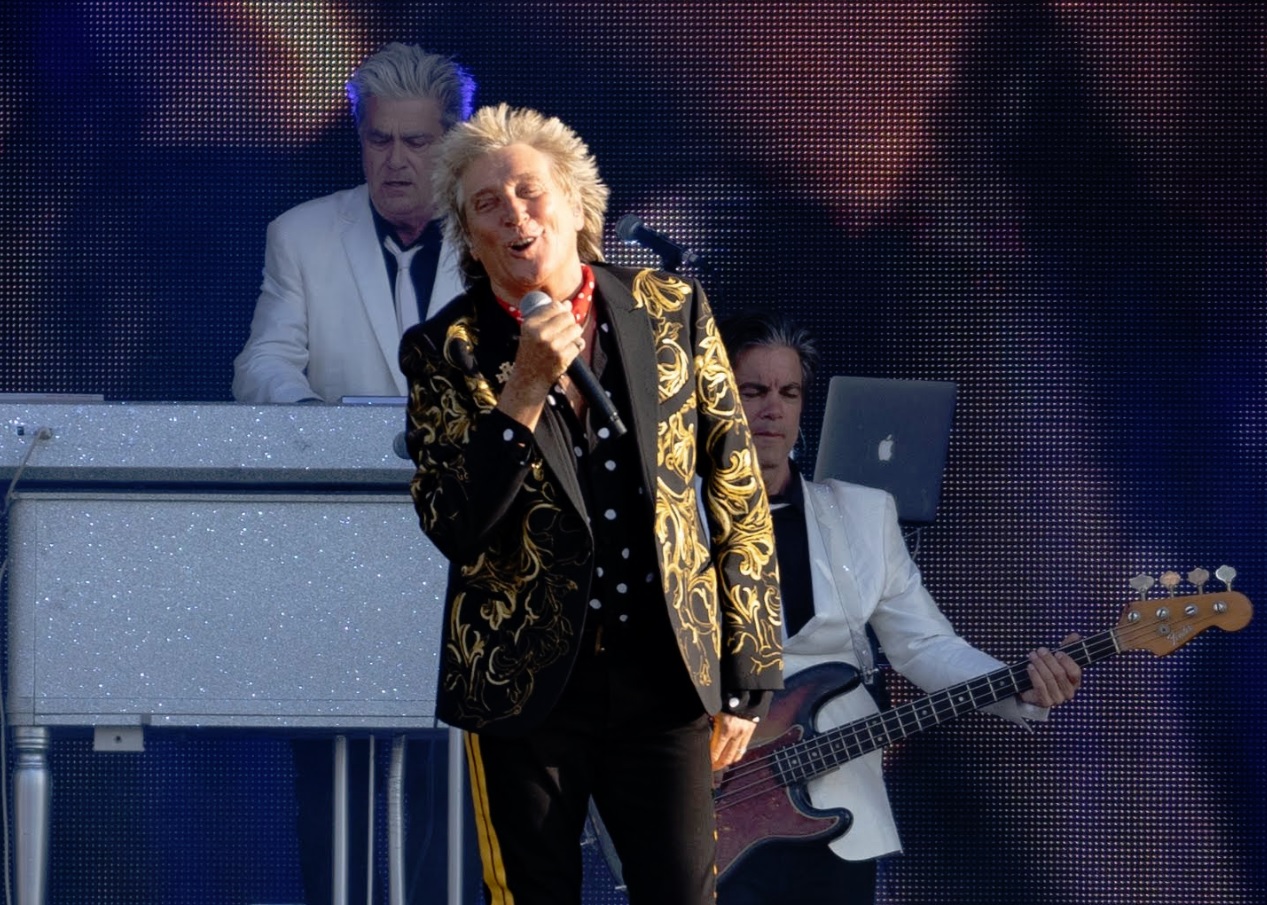 In his time, Rod has transcended all genres of popular music, from rock, folk, soul, R&B, and even the American standards; making him one of the few stars to enjoy chart-topping albums throughout every decade of his career and there lies his dazzling appeal.

He has earned countless of the industry’s highest awards, among them, two inductions into the Rock and Roll Hall of Fame, the ASCAP Founders Award for songwriting, New York Times bestselling author, Grammy Living Legend, and in 2016 he officially became ‘Sir Rod Stewart’ after being knighted by Prince William at Buckingham Palace for his services to music and charity.

I was wondering as they change their set each night whether Rod would take advantage of his geographical location and give his tune ‘Brighton Beach’ from his 2013 ‘Time’ album an outing, but sadly this wasn’t to be – an opportunity missed me thinks!

There were certain tunes that I finally hoped to hear live and in general I feel as though I was duly served, with ‘The Killing of Georgie (Part I and II)’, ‘I Don’t Want to Talk About It’, ‘Sailing’, ‘Da Ya Think I’m Sexy?’ and ‘Maggie May’. In fact, I can remember my neighbour playing her ‘Maggie May’ 7” single incessantly (and I truly mean incessantly) at the time in 1971. I can recall wondering if she was all there, the amount of times it got a spin – loudly! But I guess that’s the hold that Rod can have over some people. 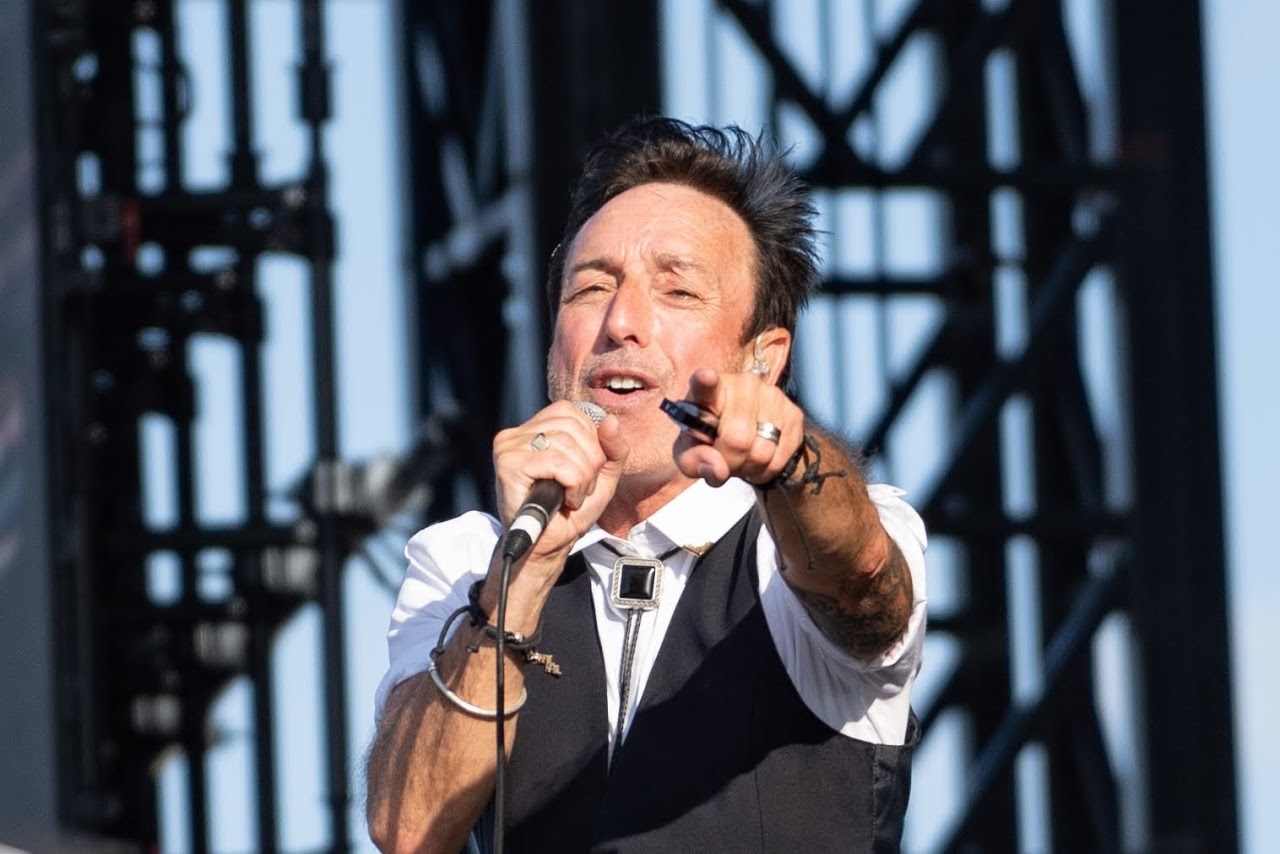 Sadly we did not get the 1972 tune ‘Handbags And Gladrags’ by Rod, however we did actually hear it performed by the Glaswegian support artist Johnny Mac And The Faithful, who I have to say did a good job of it. Johnny was certainly a massive fan of Rod as he had got Johnny on the tour because of some work he had been doing with Rod’s beloved Celtic Football Club. The next thing Johnny had penned ‘Julia’ for Rod’s latest album, and the rest as they say is history.

Johnny Mac And The Faithful’s set was a blend of Celtic rock and Americana and Johnny had a passing resemblance to Bruce Springsteen meets Jonathan Richman and to use his lingo ‘You’s’ did good, especially when mentioning Joey Ramones in his final number. The night was kicked off in Scottish fashion too with a Pipe Band.

It was clear that Rod was having a ball in sunny Sussex and clearly didn’t want to finish his set at the ridiculously early 9pm curfew, but he did stop the music bang on nine and then they let off fireworks in defiance! A rocker through and through.

I enjoyed myself much more than I had anticipated tonight and I am very pleased that I went, especially as I was lucky enough to get a setlist.

VIEW OUR FANTASTIC PHOTO ALBUM OF THE CONCERT HERE. 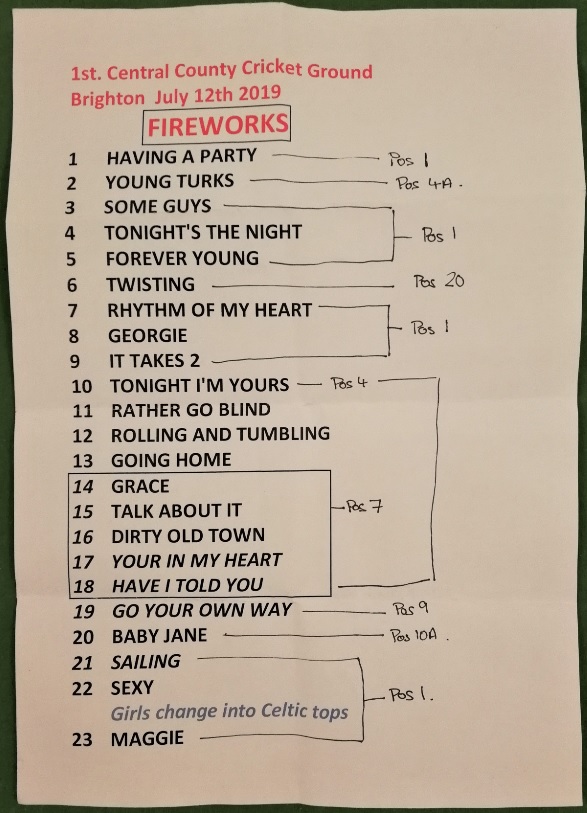 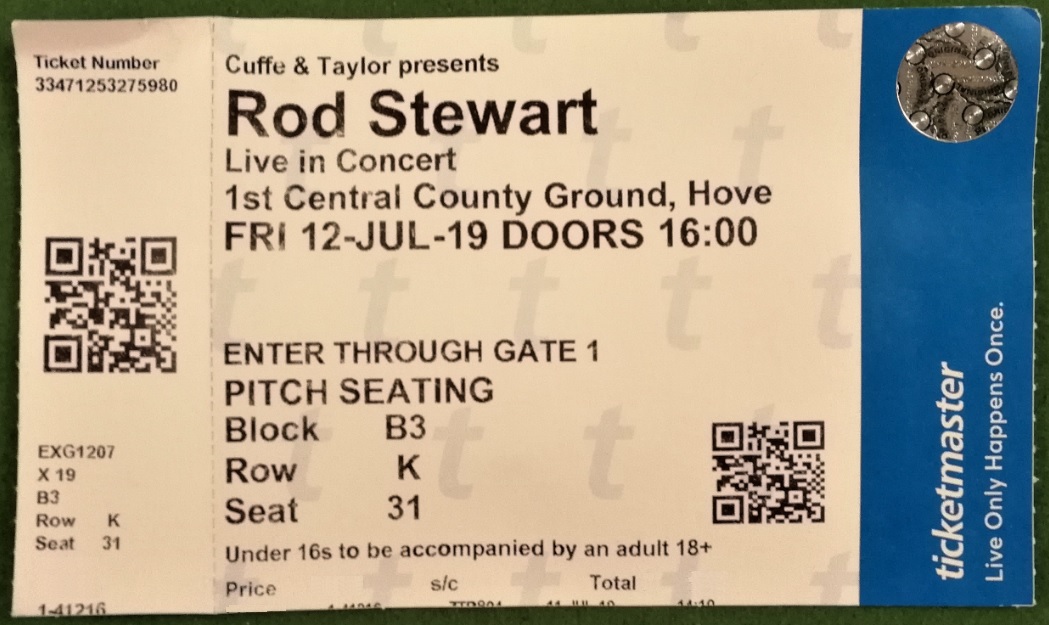 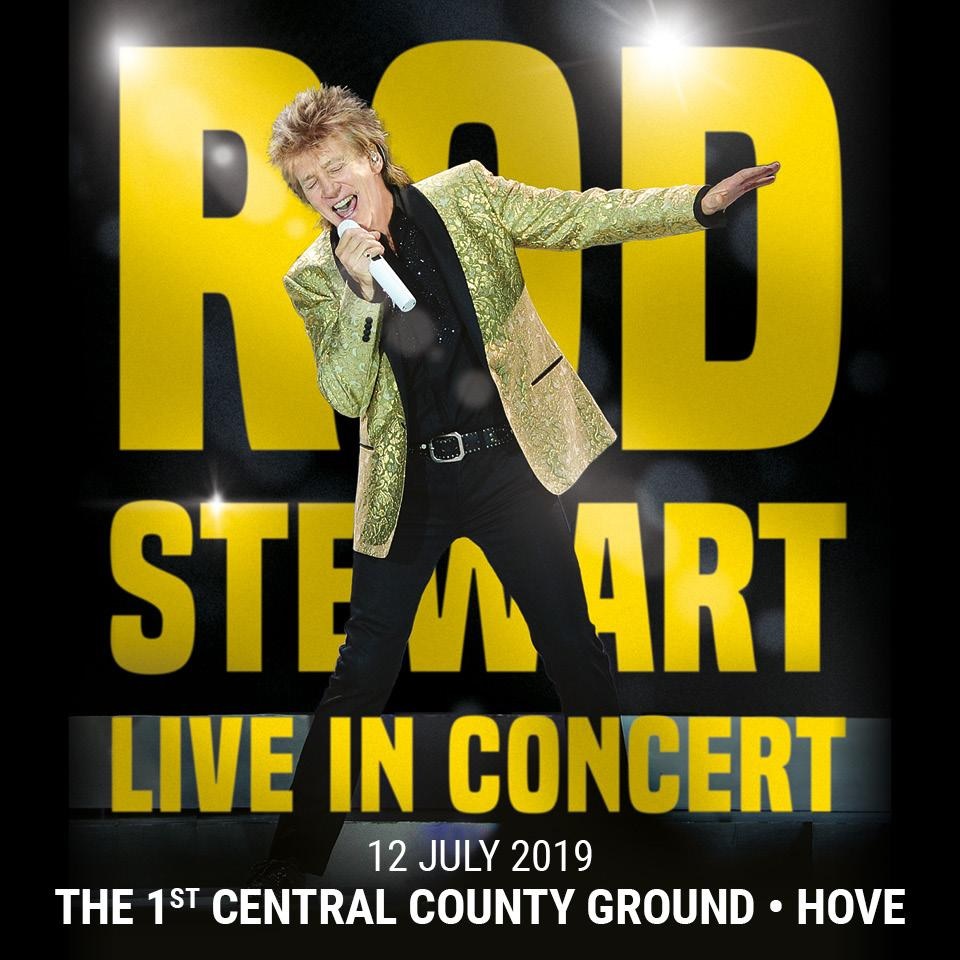