A councillor has questioned whether adopting a “homeless bill of rights” might put children at risk.

Newly elected Samer Bagaeen asked whether potential safeguarding issues had been assessed if, for example, homeless people were able to pitch tents in parks where children played after school.

The Conservative councillor raised his child protection concerns as Brighton and Hove City Council prepares to discuss a petition in favour of formal rights for homeless people tomorrow (Thursday 25 July).

Housing campaigner Barry Hughes is due to present the petition – signed by more than 2,400 people – asking the council to adopt the “homeless bill of rights”.

It was drawn up by a European coalition of homelessness organisations called FEANTSA and sets out people’s rights to housing, shelter, use of public space, equal treatment, sanitation, a postal address, privacy and the right to vote.

Councillor Bagaeen asked about the potential clash of rights – for children and homeless people – when the council’s Health and Wellbeing Board met at Hove Town Hall yesterday (Tuesday 23 July).

Like all councillors, he is a “corporate parent” to hundreds of the most vulnerable children in Brighton and Hove.

He said that the bill of rights included access to public parks – places where children go after school.

The bill says: “People who are homeless should have the same right to use public space and to move freely within it, and to rest in it, as anyone else.

“This includes, but is not limited to, access to pavements, parks, public transport and public buildings on the same terms as any other member of the public.”

Councillor Bagaeen said: “We have conversations about homelessness and mental health. We talk about access to parks – and this bill involves having free access to parks.

“Putting up tents in parks is implied with that.”

He asked whether the possible risks to children’s safety would be taken into account. 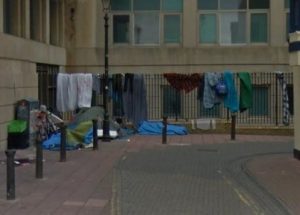 The council’s head of safeguarding Anna Gianfrancesco said: “We need to be looking at that. My role is to advise all services across the wider local authority if they have concerns around things, policies, work they are developing on safeguarding young people.”

During the local election campaign, senior local politicians gave their support to the broad principles of the homeless bill of rights.

At a hustings hosted by the Brighton and Hove Housing Coalition in April, support was offered by the former Labour council leader Daniel Yates, Conservative leader Steve Bell and Green councillor David Gibson.