Young people missing school to take part in climate strikes have won the support of councillors.

They gave their backing after 14-year-old Uma Krieger, a Youth Strike Action representative, who Brighton and Hove City Council to support the demands of the youth strikers.

The young protesters want the government to declare a climate emergency and implement a “Green New Deal”.

They also want the national curriculum to include lessons on the ecological crisis, to communicate the severity of the crisis, and to lower the voting age to 16.

Miss Krieger told councillors that a climate emergency was declared in England after the mini heatwave in February.

She said: “Let’s say the government is the emergency services.

“You try as hard as you can to let them know about the situation because they are the ones who can fix it.

“They have the money, resources and the power to make laws.”

She said that the United Nations panel on climate change had said that a chain reaction would happen within 11 years – by 2030 – which would mean that the government’s target of carbon neutrality by 2050 would be 20 years too late.

Citing an Intergovernmental Panel on Climate Change report, she said that the remaining carbon “budget”, to keep global temperature increases to 1.5 degrees – still a dangerous level – would be reached before 2030.

Miss Krieger added: “If we want any chance of my generation or the next to have a planet that is habitable and remotely safe to live on then we have to act right now.”

Council leader Nancy Platts said: “I believe we now have the political will and the people in our city to drive this change.

“I am genuinely excited about setting up a ‘city assembly’ to take this forward.

“I have personally signed up to support a ‘Green New Deal’ and will encourage others to do so.”

She also backed bringing the voting age down to 16 and promised to write to the new Education Secretary Gavin Williamson. 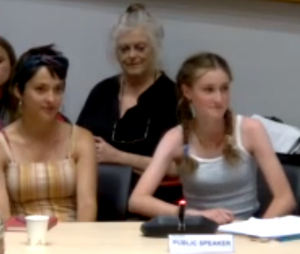 All Green and almost all Labour councillors backed a motion asking the council to support the youth strikes and other climate action.

In her maiden speech Green councillor Hannah Clare asked the council to create a protocol for attending school strikes, support people who want to take action in a general strike on Friday 20 September and explore car-free days in the city.

She also called for a reduction in the voting age and for the ecological crisis to be part of the national curriculum.

She said: “Now is the time to listen to young people. Young people do not have a say at the ballot box and therefore politicians can ignore you.

“We ask that young people are involved in policy-making to solve our climate crisis.

“Climate change is happening and action is needed now. 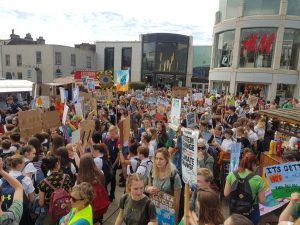 Councillor Clare said that a car-free day was needed to raise awareness of air pollution and ensure that we had safer air to breathe.

She wants to work with schools to allow young people to attend the Youth Strike for Climate Change events and hopes that teachers will understand this is “learning outside the classroom” – a method supported by Ofsted.

He said: “Strikes will happen regardless of if the council support them or not.

“By acknowledging their concerns, it demonstrates we understand and care about their views.

“The council can lead on this and allow council staff to take part without fear of disciplinary action.”

Labour councillor Nick Child supported the Green move to allow school children to attend the event on Friday 20 September and plans for a car-free day in his maiden speech.

He said: “History has shown that only when people are prepared to take a stand through non-violent protest – through campaigning and industrial action – will real and meaningful change be brought about.

“We must now stand together and take the strongest stand on this existential issue that affects all of us, our children and grandchildren.”

Conservative councillor Vanessa Brown said that her party supported young people’s action on climate change but could not support allowing them to take strike action.

She said that they could lobby, write letters and demonstrate in their own time or join in community clean ups.

Councillor Brown said: “As a council we would be failing in our duty of care if we endorse this action.

“Parents have a right to be confident that their children are safe at school, but when they are leaving without permission, as they did earlier in the year, it becomes a serious safety issue.” 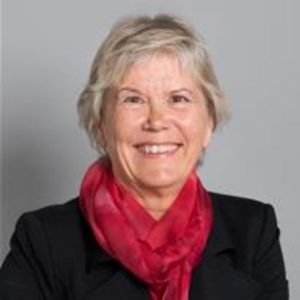 She said that her own granddaughter took the climate change issue very seriously but some pupils just thought it was “a good way of getting out of school and having a fun afternoon”.

Labour councillor Anne Pissaridou, who chairs the council’s Environment, Transport and Sustainability Committee, said: “We have an enormous responsibility.

“The future of humanity and biodiversity on this planet depends on what we do in the next 10 years.”

She said that the council had a strong mandate for action on climate change but, despite the work that it was doing, it was only scratching the surface.

As a mother, she said that she walked with her daughter and other young people on a recent school strike and found them “inspiring”.

Labour and Green councillors voted to write to the Education Secretary to include the ecological crisis in the national curriculum, ask Home Secretary Priti Patel to lower the voting age to 16 and support strikes and car-free days.