Today the Seagulls embark on their third consecutive Premier League campaign as they again kick off at Watford on the opening day.

Albion’s continued tenure in the world’s greatest league has surprised some.

Clubs like Blackpool, Bradford and Barnsley have all failed to seize the opportunity in recent years to establish themselves in the Premier League after the hard graft of reaching that particular summit.

Brighton and Hove Albion, however, have not yet been in the bottom three since August 2017.

The club and its board of directors have long held lofty ambitions. All the way back in 2016, the 1901 club renewal packs contained a waiver about ticket prices and availability for games that fell under the UEFA ticketing policy.

The club has tapped into the wealth that has been generated in the twin towns since the turn of the last century.

It gives a club that only 15 years ago sent begging letters to its Withdean faithful a superb and very sound financial footing.

Tony Bloom’s decision to sack Chris Hughton was controversial and in some quarters unpopular. A manager who had plucked the Albion from almost certain relegation to League One to promotion to the Premier League in just over two and half years, appeared harsh to some.

However, Premier League chairmen are seldom known for their compassion.

Graham Potter will manage the Seagulls in his first Premier League match as a coach this afternoon. The club’s spending has topped £60 million in the transfer window. 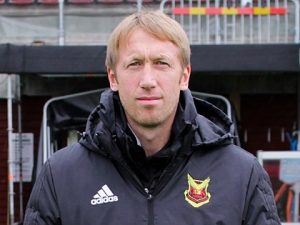 He is an educated, philosophical and an innovative new breed of head coach.

He believes that players should be expressive on and off the pitch.

Gone is the style of Hughton’s closely guarded and ultimately secure defensive strategy. But that was hard to watch, not entertaining and, ultimately, once unlocked and penetrated, impossible maintain and recover from.

This will be the third time since 2013 Albion have started the season with a new boss at the helm.

Oscar Garcia flattered to deceive, scrapping a play-off place on the final day but losing his way mid season.

Sami Hyypia just couldn’t get the team to play the way it looked on paper and Albion were poor throughout his reign.

Potter’s Albion have looked impressive in pre-season and the quality of signings is encouraging.

However, he is untried at this level. As was Hyppia at second-tier level.

To hit the ground running will be crucial. Hyypia had some relatively easy games to grab some points early on. There are none of those in the Premier League. Every fixture is the opportunity for one club or another to gather points for survival, push for a European spot or win the title.
Every second of football counts.

Let’s hope ‘potterball’ is sophisticated enough to get those early points and maintain Albion’s proud record of never being in the Premier League drop zone.

Who knows, the Seagulls could exceed their highest ever position of 5th place in the old Division One, gained in early September 1981.

Here at Brighton and Hove News we wish Graham Potter and the players the very best of luck for the new season and like many Brightonians are extremely proud of the club and grateful to its board of directors and staff.

We are looking forward to the season ahead and hope that by December we are still reporting on Graham Potter’s Brighton and Hove Albion.