It was all kicking off beneath Brighton Station on Friday night! 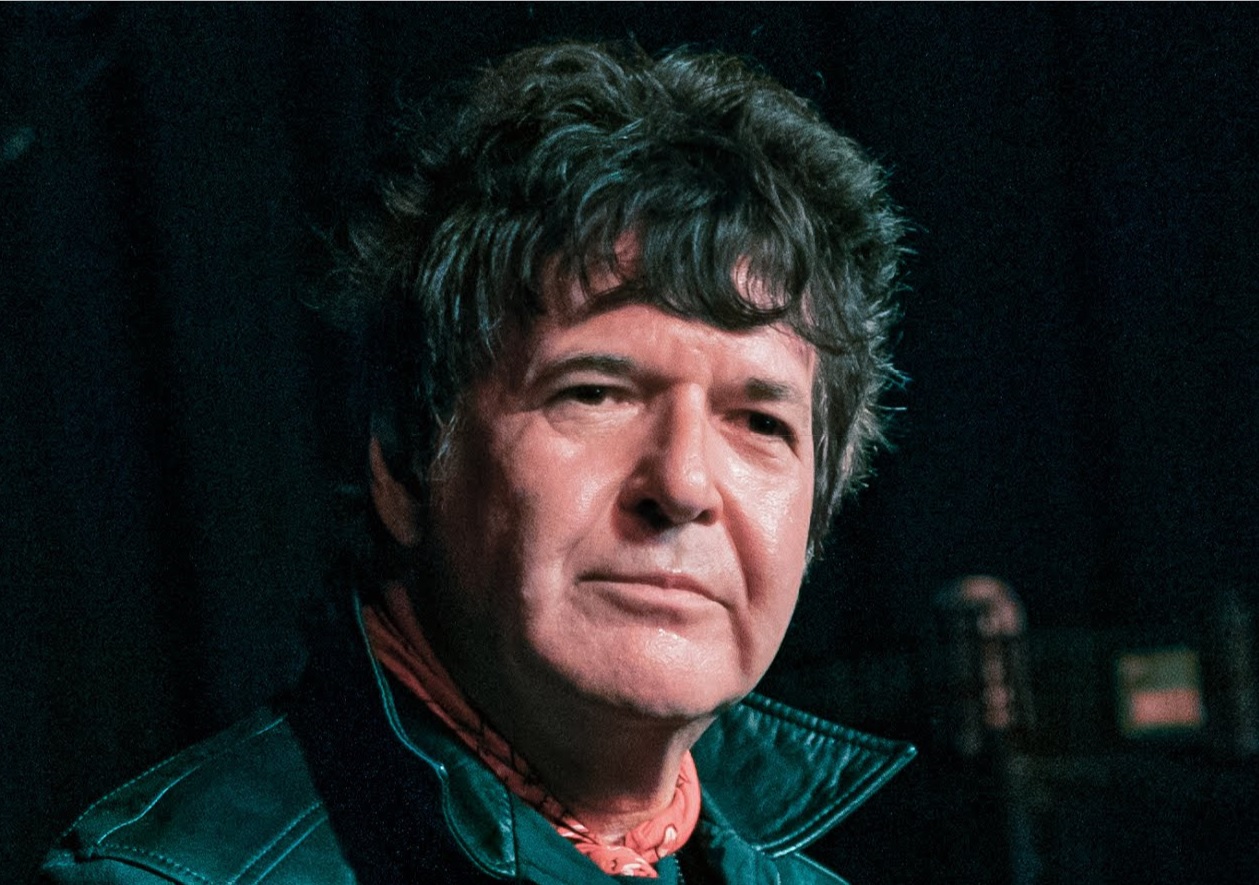 Sounds ominous right? Well actually it sounded awesome, as we’re not talking punch ups or riots here my friends, but highlighting the fact that on Friday 23rd August 2019 the area immediately below Brighton Railway Station was a throng of musical activity!

There were no less than 3 separate music events taking place literally a stone’s throw away from one another – the area was buzzing with music fans all out for a fab evening.

On offer was a choice of musical styles at intriguing venues. The venues in question were the Green Door Store which is located under Brighton Station; across the road from that is The Prince Albert at the very top of Trafalgar Street; and right across the street from that is the Brighton Toy & Model Museum, which is densely packed into a set of Victorian cellars under the station, which covers four thousand square feet. The museum’s nostalgic displays draw on guest collections and a core collection of over ten thousand items. Yes that’s correct music performances inside the toy museum!

Simultaneous concerts were taking place at these 3 venues (pics taken on previous days) – Click on pix to enlarge!

This special event had been organised by Sofar Sounds: Brighton whereby their Brighton team pick 3 stand-out acts for each show and stage them in beautiful, quirky or unusual spaces that best suit the lineups. The Sofar Sounds ethos is to offer artists and music fans a respectful, distraction free and immersive environment to really enjoy live music. This has proved very successful since its founding ten years ago and now Sofar Sounds runs in 400+ cities worldwide. However, you can’t just turn up at the venue as the locations and acts are generally a secret and you have to apply to attend an intimate show and it seems that these events nearly always sell out. Clearly there’s a demand for musical and location mystery. If you are interested, then visit Sofar Sounds on Facebook, Instagram: @sofarsoundsBTN or Twitter: @sofarsoundsBTN for further details.

The gig at the Brighton Toy & Model Museum was clearly one to savoir and not to dip in and out of, and although some of the Brighton & Hove Music Team were in the area, it was more respectful to attend one of these special events on another occasion. One of the three acts on the bill was Hanya and we explained to band members Heather Sheret, Jack Watkins and Ben Varnes (who were outside), that we are already down to review their Saturday 14th September show with Tallies down the road at The Hope & Ruin in Queens Road and the trio were most pleased. Purchase your tickets for that gig HERE.

Some of the Brighton & Hove Music Team based themselves in The Prince Albert and the remainder were lapping up the synth sounds on offer at the Green Door Store’s free psych out evening. On the bill here were Fruity Water, Battery Operated Orchestra and Timeron. 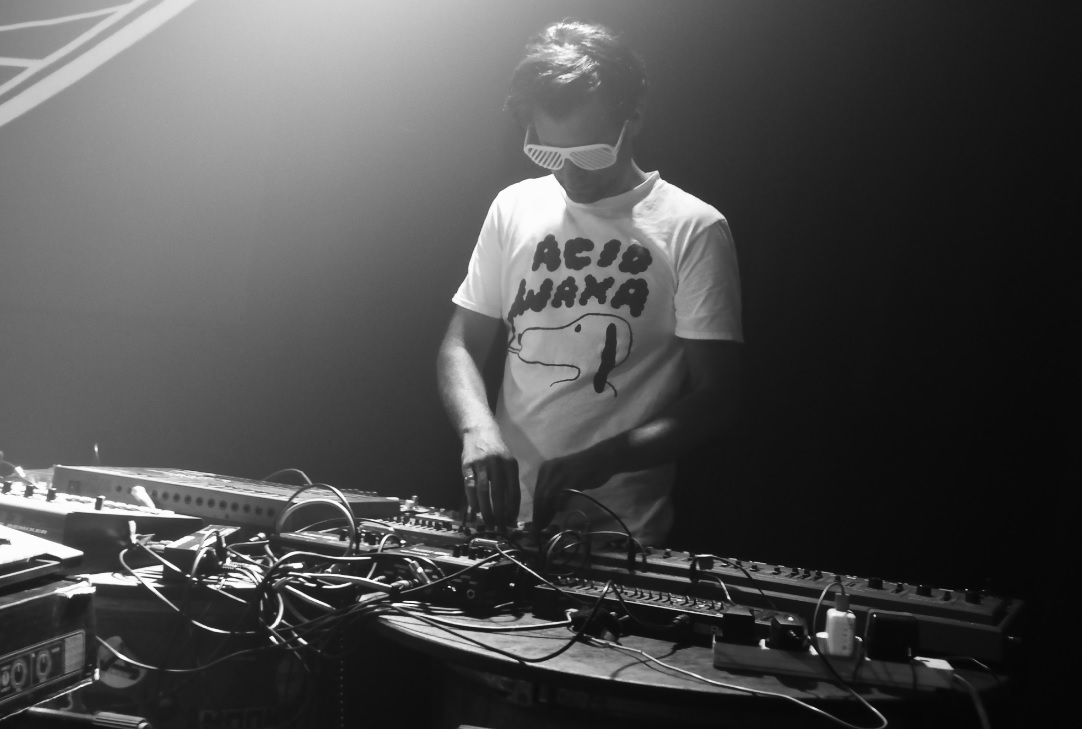 Timeron kicked off the evening with his uplifting set of live wonky acid house, which was fully analogue and fully delivered from the heart. Clearly he enjoyed himself as he has posted “Took the machines out for an early set. did a weird cover of Lime (in instgrm vid section). many thanks @fruitywaterband @booelectric top night.top buzz!” 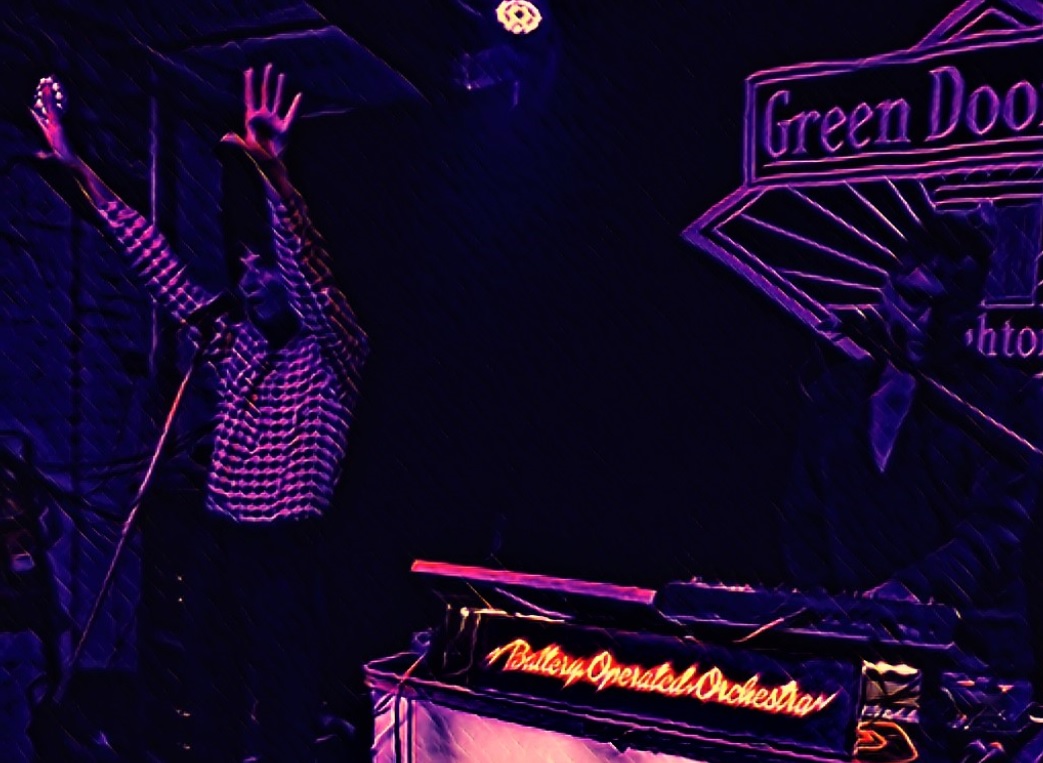 Next up were the wonderful Battery Operated Orchestra aka BOO who are a DIY synthpop duo featuring Brigitte from Tasmania and Chris from Scotland and they specialize in playing nostalgia synth vibes with a cutting raw edge! Their current album ‘Snare’ came out on 10th August last year and is inspired by the cold-war. It has eleven excellent tracks on it, including lead single ‘Perfect Wreck’ – watch the video HERE.

They are quite a creative pair as not only do they craft their own musical material, but they make their own videos and even the CD artwork, which DJ’s have described as some of the most beautiful they’ve seen. They had their distinctive ghost style BOO t-shirts and CD’s on offer in their homemade ‘BOO-tique’ at the Green Door Store on the night.

Credible music website Louder Than War have said BOO offer “Highly charged electronica with incredibly addictive melodies.” and I for one would totally agree.
They played a fab set and ended with my favourite two songs of theirs ‘Fairy Tale’ and ‘Radiation’ both of which can be found on the 2016 album ‘Radiation’. Having witnessed them play live several times before, I was pleasantly surprised that this new performance had signalled a deeper meaty sound and it’s definitely the way forward for them. Looks like we’re in for a BOOtiful future with the band, as they have posted “Thank you to everyone who came to the show on Friday, and to the performers Timeron and Fruity Water, it was rad! Now, back into the studio we go…”

Check out their sounds on Bandcamp HERE and find out more about BOO HERE. 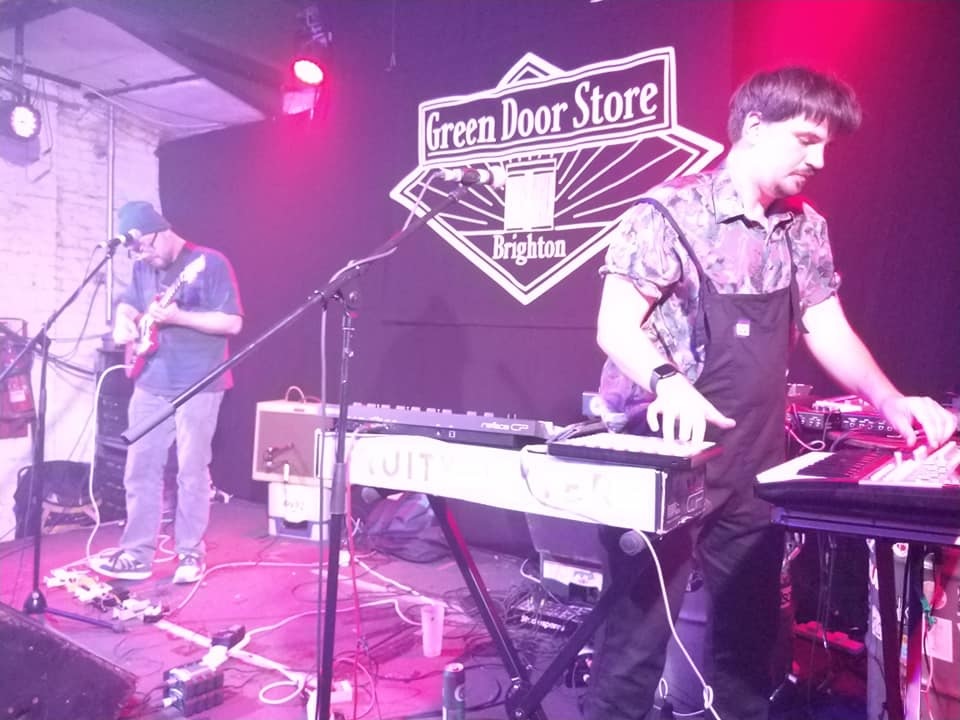 Topping the bill at the Green Door Store tonight were two Brighton based lads, Adam and Smalan, that are known as Fruity Water. They offer up their own charming melodic down to earth blend of synth and guitar sounds rather like New Order.

Fruity Water are in their own words “just a couple of lads making some dreamy electro-pop” and that sums up their understated demeanour. There’s none of this ‘look at me I’m a star’ nonsense with these chaps, they are very down to earth and approachable lads.

They performed a mix of some new and older music which was basically a merging of guitar and synth and they certainly got everyone moving on a hot summer Friday night. They were enthusiastic during their set and a guest female singer came on during an encore track and she was also good. They enjoyed themselves too and have posted “Thanks to everyone who came to see us last night, we had a lovely time!!”

Check out Fruity Water on Bandcamp HERE and on Facebook HERE.

Meanwhile whilst the Green Door Store was bopping along to synth sounds, the guys over the road at The Prince Albert were experiencing a possible once in a lifetime treat! Blondie’s renowned ‘Rock and Roll Hall of Fame’ drummer Clem Burke was appearing at the 100 capacity venue with The Tearaways, who are John Finseth, Greg Brallier, David Hekhouse and John Ferriter. The band broke from the Santa Barbara indie scene from their simple origins back in 1981 playing in Isla Vista, Goleta and Santa Barbara. The guys have flown over from the USA in order to debut material from their new disc ‘We Grew Up On AM Radio’, which is the band’s sixth full release in the last five years. This sold out Brighton date is certainly a case of wanting to get back to your roots! It’s going to be CBGB’s all over again! 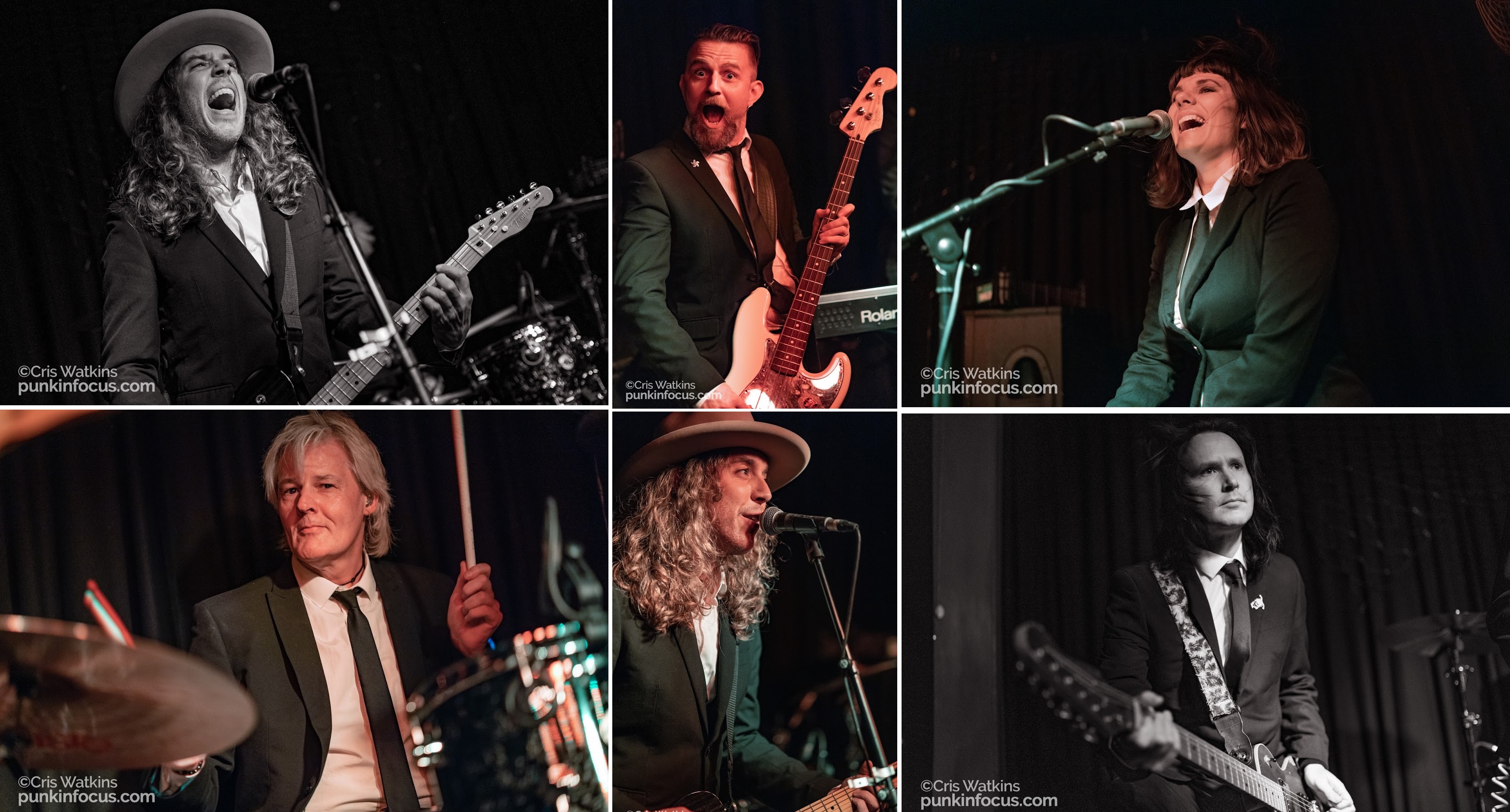 I must confess that I’d gone along to see The Tearaways tonight primarily in order to watch the great Clem Burke play drums from close quarters. I’d never heard of Ryan Hamilton & The Harlequin Ghosts before, and frankly when they took to the stage in their black suits, white shirts and black ties I wasn’t expecting anything more than a vaguely entertaining half hour. However, if there is a physical representation of a band that is absolutely cooking live, then this band is it. They are purveyors of original raw rock ‘n’ roll. Although the singer, Ryan Hamilton, does take us on a country blues excursion straight out of Fort Worth, Texas, from where he hails. The rest of the band are from the UK, so they really are transatlantic. If you get the chance to see this lot live, grab it with both hands, because I don’t think they’ll be playing venues this small for much longer. An opportunity presents itself on the 28th of August, when they play London’s 100 Club. Get down there!!! The band have posted “Thx Brighton! Great night.”

Further info on the band can be found at www.ryanhamiltonmusic.com 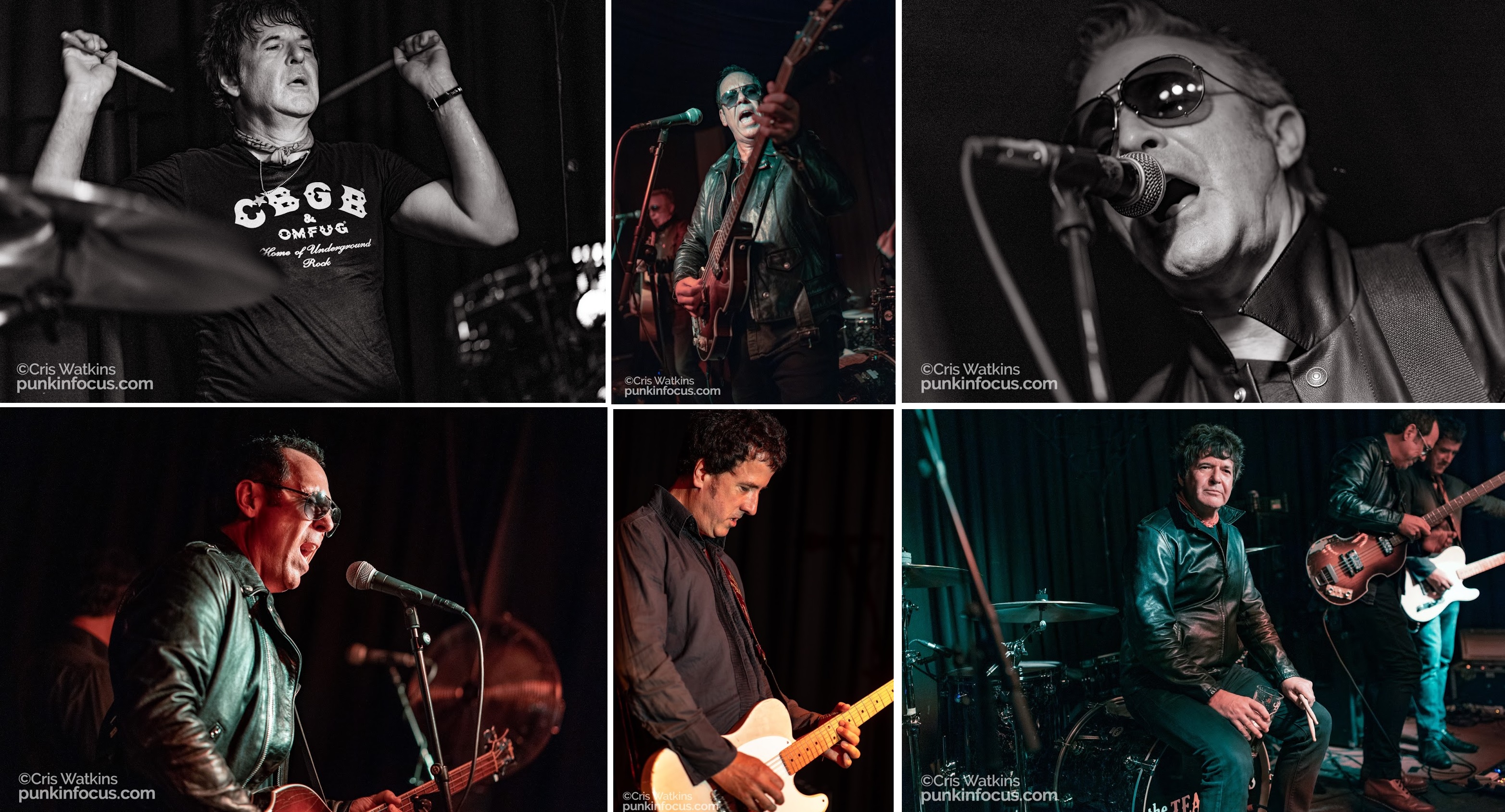 After the splendiferousness of Ryan Hamilton and the Harlequin Ghosts I was concerned that The Tearaways may suffer as a result of hiring such a superb support band. Indeed, when they commenced the sound was utterly appalling and they had to stop and have an impromptu soundcheck.

When their set started properly their classic 1960’s beat group line-up of lead guitar, rhythm guitar, bass and drums sounded comparatively pedestrian. However, they soon got into their stride and ‘Manchester Girl’ sounded like a tight and powerful 21st Century Beatles. All of the band including Clem Burke wore leather jackets, but after three songs Clem dispensed with his to reveal a “CBGB OMFUG” T-shirt. Well, it is essentially his alma mater.

‘Wrecking Crew’ is a highlight of the set and doffs its cap to the sixties Californian session crew of the same name. It quotes from ‘Da Doo Ron Ron’ and other classics that the famed sessioneers played on.

Clem Burke takes a quick breather and tells us how glad he is “to be in Bristol”. He quickly corrects himself, but tells us that if we haven’t been to Bristol we should go “cos it’s a cool place”. A career in tourist information awaits, Clem!!! 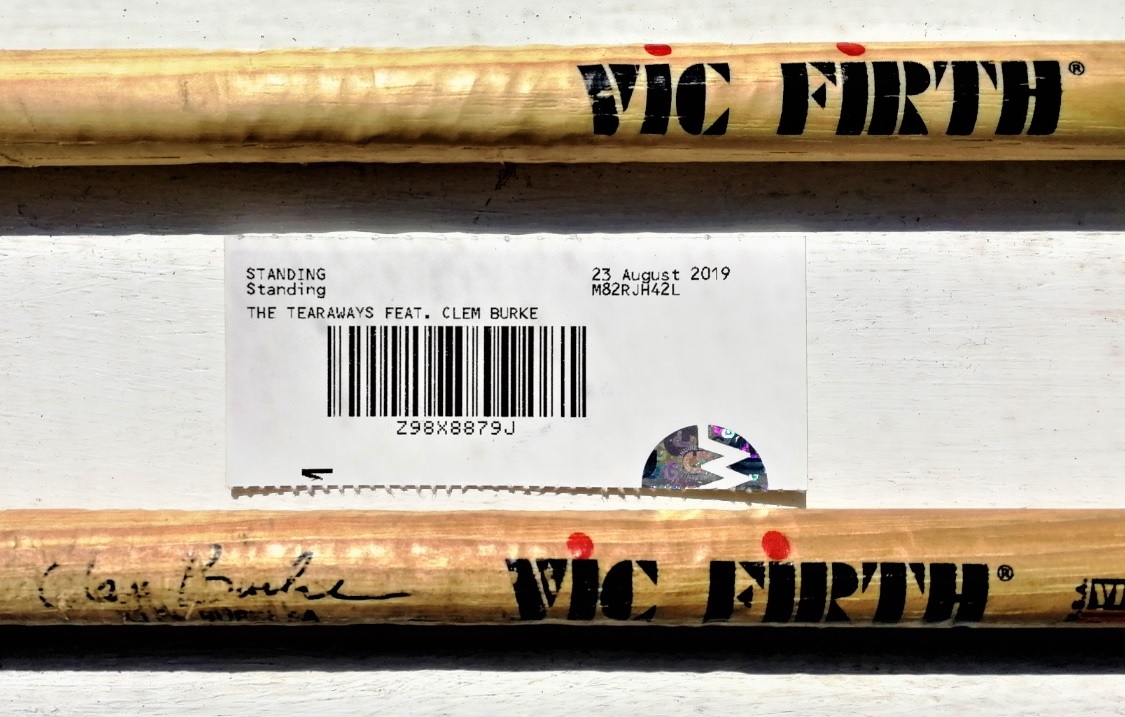 Next up is ‘Burke’s Law’, a drum solo. Immediately he finishes that he leaps from his stool and tries to get the cold air fans at the side of the stage to work, as the poor guy is clearly heading towards heat exhaustion. If they’re working at all they’re having little effect and eventually Will Moore from The Prince Albert comes along with a freestanding fan which is pointed at Clem.

They commence a Dave Clark Five medley with ‘Bits And Pieces’, but as it goes into ‘Glad All Over’. Clem has clearly had enough and calls out for ‘All Or Nothing’, the Small Faces number, which was supposed to be an encore. The second it finishes Clem charges offstage, doubtless to pour cold water over his head. The band look a little confused but follow him.

They’re soon back for encores of ‘I Can’t Explain’, ‘The One After 909’, and The Bee Gees’ ‘You Should Be Dancing’, which if I’m honest isn’t the best version I’ve ever heard.

If you want groundbreaking Earth shattering music, that’s not what The Tearaways provide. However, if you want a great night out watching a band of ace musicians playing covers of songs from their youth that they love, and originals based on that era, then The Tearaways are for you. Turn it up to 11!!!

The band posted on social media that “The Tearaways Brighton show was a complete sell over capacity sell out on Friday. The Casbah in Liverpool will likely be over capacity as well. The tour is going great,” 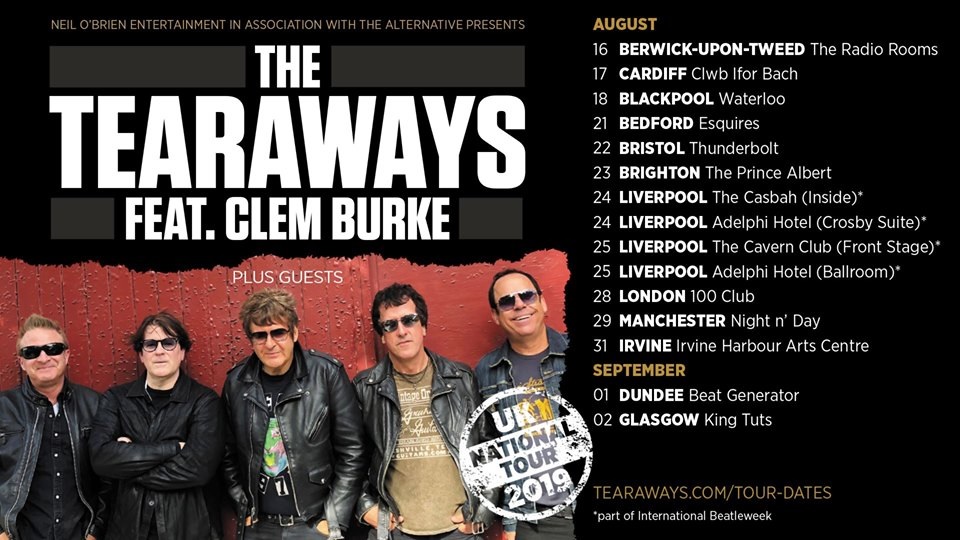 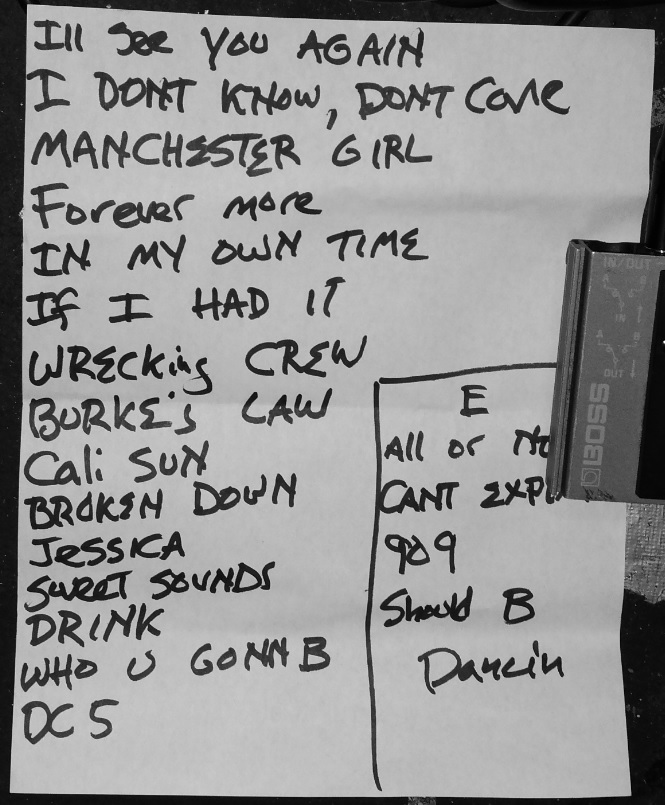 Raise your ‘Cheekbones’ and smile