Councillors turned down plans to dig a sunken garden and described the proposal as “perverse” and “laughable”.

The retrospective planning application for digging out the garden at 44 The Cliff, in Roedean, was received after tons of material had already been excavated.

And an official investiation is under way after properties – described as two mobile homes – were put up without planning permission from Brighton and Hove City Council.

But when the council’s Planning Committee met at Hove Town Hall yesterday (Wednesday 4 September), members were told that they could not discuss the planning enforcement team’s current investigation.

Councillors were frustrated that they could not talk about potential enforcement action as they considered the application for a sunken garden.

They were addressed by Roedean Residents’ Association chair Craig Jones. He spoke on behalf of neighbours who sent eight letters of objection.

Mr Jones said that letters had also been sent to the planning enforcement team by neighbours concerned about the unauthorised extra buildings in the garden and a septic tank.

He told the Planning Committee that the development was “deliberate and unlawful”.

Mr Jones said: “It is no surprise that the owners have employed a planning consultant as neighbours and the residents’ association have begun to lift the lid on a deliberate and unlawful development.

“We’ve been shocked by this owner’s pitiful disregard for the neighbours’ interests, the interests of the council and of the law – indeed a disregard for anything other than their own profit.”

“The owner is clearly establishing some form of dwelling at the foot of their garden.”

He added that no one on the committee was so naive as to be unable to see it.

He highlighted sewer connections and how compacted earth in-fill had damaged a neighbouring boundary wall.

Councillor Bridget Fishleigh asked Mr Jones about a concrete barrier next to the site.

Mr Jones said that the applicant was given right of access across the Roedean Pitch and Putt but the right of access had been removed after trees were hacked away and earth removed.

The barrier was put in place to prevent further access. 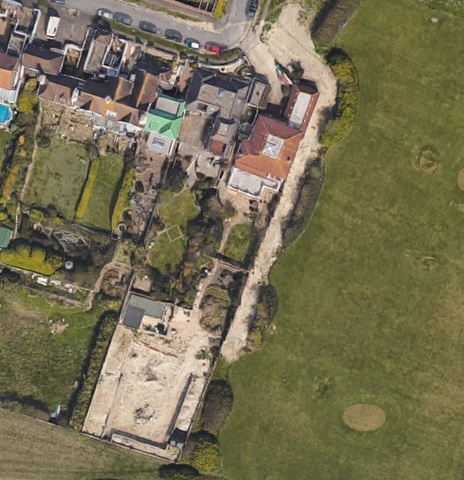 She said that the application related only to the sunken garden and its retaining walls.

Ms Sheath said: “The sunken garden cannot be seen outside.

“Likewise because of its sunken nature the impact on neighbour amenity is very limited.”

Labour councillor Daniel Yates was frustrated at his inability to consider future prospects for developing the garden.

He said: “This is the most perverse application I have seen in my life.”

Conservative councillor Joe Miller asked why the owners would want to eradicate a sea view that they had paid a premium for. He also asked what had happened to the chalk excavated from the site.

He said: “This is the most laughable application I have ever seen come to Planning Committee.

“It shows a total disregard for the planning process and the local planning authority.

“I think it is an utter disgrace, the behaviour of this applicant.”

Green councillor Leo Littman said that a site visit by committee members had been an “extraordinary experience” while adding that he had concerns about the design.

Labour councillor Tracey Hill, who chairs the Planning Committee, and a previous chair, Green councillor Phélim Mac Cafferty, voted for the scheme along with Councillor Yates.

The remaining six members of the Planning Committee voted to refuse permission on the grounds that it had a detrimental impact on the landscape and setting of South Downs National Park.