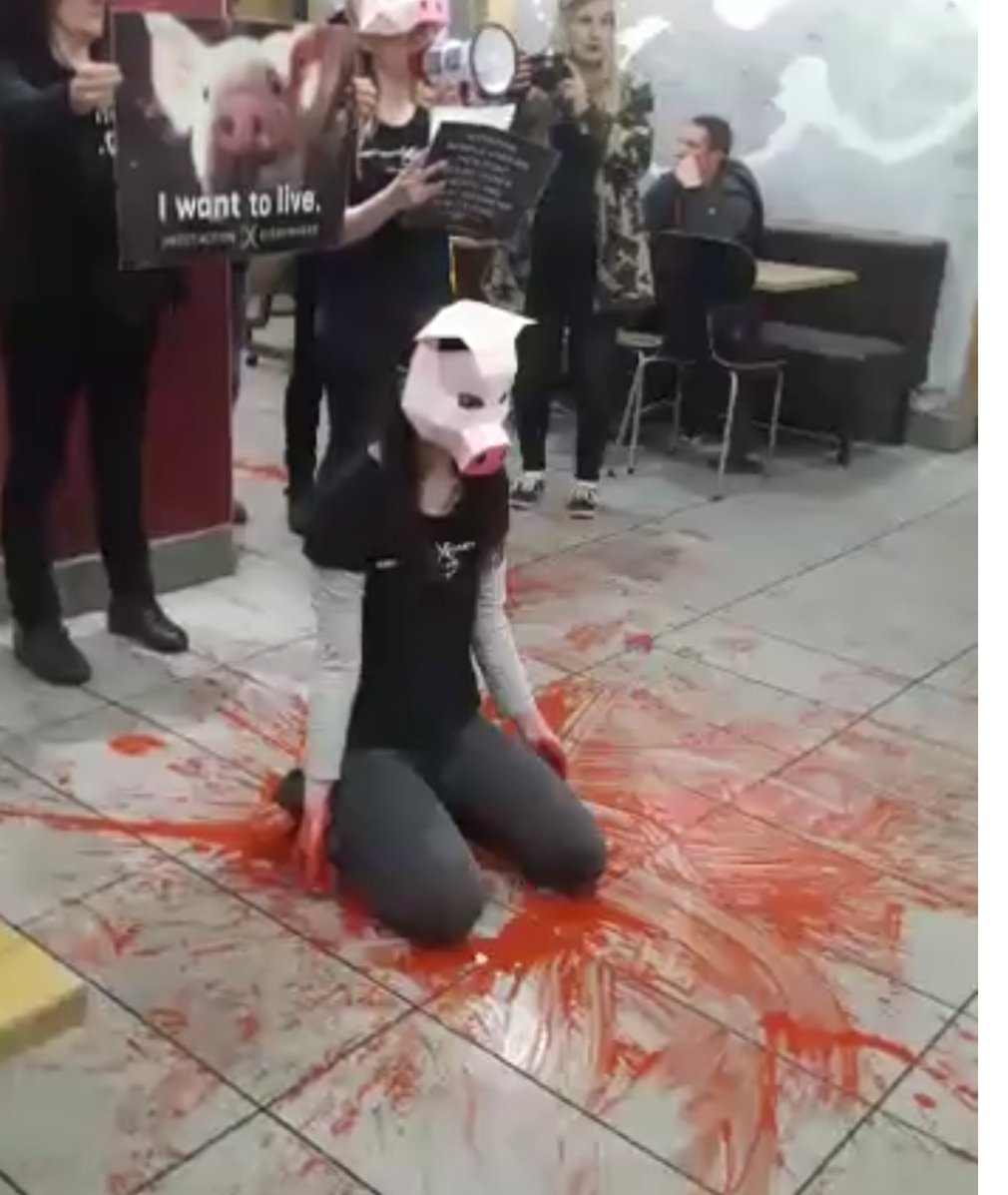 Customers at a branch of McDonald’s targeted by vegan protesters were left angry and upset, its manager told a court today.

Dylan Roffey, 24, of Terminus Road, Brighton, was convicted of criminal damage caused when she chucked fake blood over the London Road restaurant on a a busy Friday evening in May this year.

However she was cleared of obstructing arrest after she refused to leave the restaurant, instead lying on the floor and going limp while officers attempted to cuff her.

She claimed she was trying to prevent damage to other property, – a defence allowed under the 1971 Criminal Damage Act and in this case the livestock killed to make the burgers and chicken nuggets served at the fast food chain.

And she said that going limp was a passive act, and a standard tactic of protesters when being moved on by police.

When viewing video footage of people leaving the store, Roffey’s defence lawyer Meredoc McMinn said most of the customers seemed unruffled, and some were even laughing.

However, McDonald’s manager Robert Frost said some had been distressed.

He said: “Some customers were very upset and some got a bit agitated and angry by their presence.

“We tried to calm them down and told them that we were calling the police.

“Some of them were shouting back at the protesters … one customer in a corner said they had mental health issues and they were very upset that these protesters weren’t being removed from the premises and I explained that we had to wait for the police.” 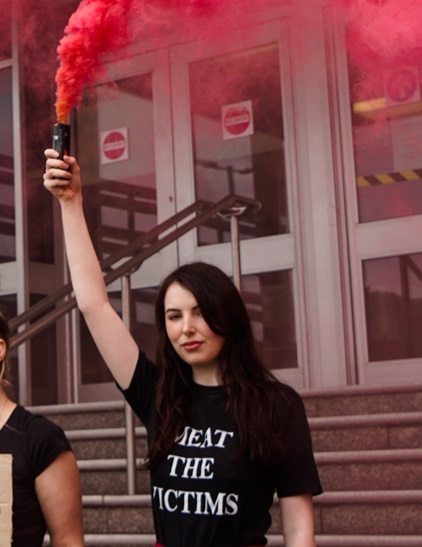 Dylan Roffey outside court this morning

Wearing the same t-shirt sporting the slogan Meat The Victims as she had donned for previous court appearances, Roffey said she had mixed the fake blood herself, using water, flour and red vegan food dye, and tested that it was both edible and could easily be wiped clean.

However, Mr Frost said that after police advised him to close the restaurant for the night, he had told his staff to go to Asda to buy about £50 of bleach and cleaning products to remove what he thought was red paint, and they then spent a couple of hours cleaning the floors, walls, tables and ordering machines.

The other prosecution witness, PC Willis, said when he got to the branch, Roffey had been kneeling in the fake blood with her arms by her sides, wearing a pig mask.

He had told all the protesters to leave or risk being arrested for breaching the peace, and all started to do so except for Roffey.

Another protester came up and spoke to her, and at first she started to move towards the doors – but then she sat back down on the floor and despite being told she would be arrested if she didn’t move, she did not respond.

PC Willis said: She was told she had to move or she would be arrested. The female did not respond at all. I told her I was arrested her to prevent a breach of the peace and the female tensed her left arm a little bit and her right arm ended up in front of her in a Superman position.

“She was making her body into a dead weight to make it difficult to get her off the floor.”

More video footage showed the PC Willis putting his knee on Roffey’s back after he had handcuffed her, which she said had caused her pain and made it difficult to breathe.

PC Willis said he had put his knee there as part of a standard method used to handcuff uncooperative suspects.

While giving evidence, Roffey said she and her fellow protesters had targeted the restaurant “to raise awareness of what McDonald’s is doing to animals and to save the lives of animals by bringing to a stop the sale of their bodies, disrupting the supply chains.

“Every burger that McDonald’s sells results further down the line in an animal being exploited and murdered for that purpose.”

She said she had been careful to only put the fake blood on surfaces which could be cleaned away from customers, adding: “People spill food and throw up and there’s lots of kids go there so it’s quite wipeable.”

Sentencing, district judge Amanda Kelly sad she respected Roffey’s strongprinciples but this was not the right way to go about it.

She added 60 hours unpaid work to a sentence handed down last week for another vegan-related offence.

Roffey was then convicted of assault for spitting at a woman who she thought was wearing a fur-lined coat at Brighton Station in January this year.

Roffey had denied the attack, saying she had just been speaking in a friendly way to Rhiannon Boyle and her friend Helen Mitchell, but district judge Amanda Kelly said she believed the victims’ account.