Ofsted’s decision to rate Moulsecoomb Primary School as “inadequate” showed that the education watchdog was “no longer fit for purpose”, according to Brighton Kemptown MP Lloyd Russell-Moyle. 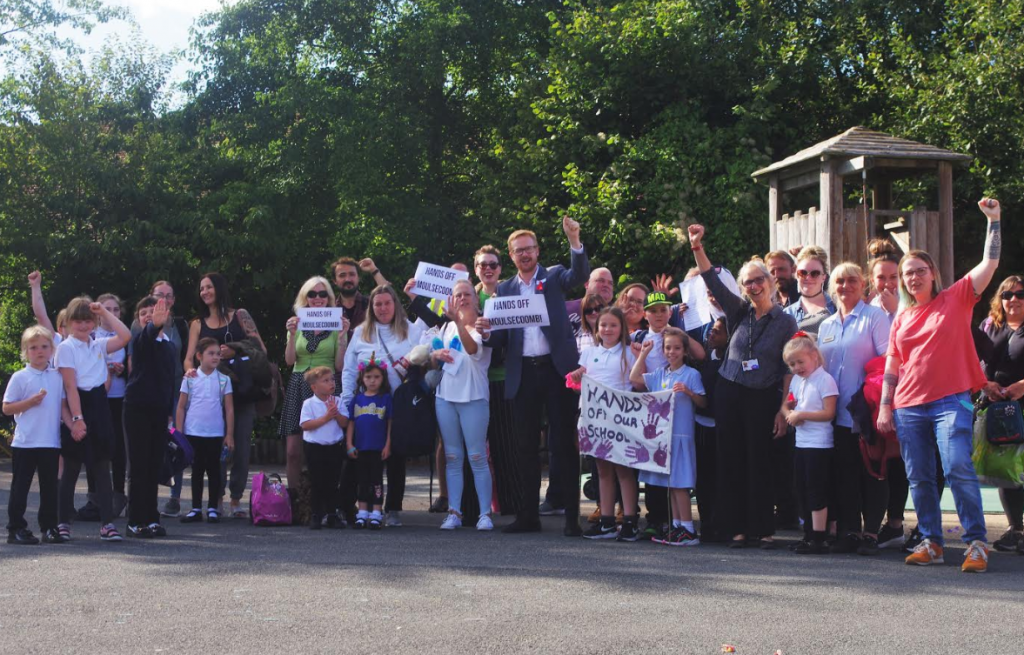 Mr Russell-Moyle spoke out after visiting the school on Friday (13 September) when he vowed to “fight tooth and nail” to prevent it becoming an academy.

His remarks followed a decision by the regional schools commissioner Dominic Herrington that the school should become an academy after Ofsted rated it “inadequate” in May.

The “academy order” spurred parents and supporters to start a campaign – Hands Off Moulsecoomb Primary School – opposing a takeover by a “multi-academy trust”.

Instead, the campaigners want the Moulsecoomb Primary to remain a local authority maintained school, accountable to Brighton and Hove City Council.

On Friday children from year 5 and their head teacher Adam Sutton gave Mr Russell-Moyle a guided tour of the school.

The MP joined one of the classes where he spoke about his work as an MP and answered children’s questions. At the end of the school day he met and spoke with parents in the playground.

NEU (National Education Union) rep and teacher Calvin Cumiskey said: “In a world where politics seems to be viewed with such cynicism, it was clear that Lloyd is a politician who cares for his community, cares deeply about injustice and will do all he can to help Moulsecoomb Primary School from being forced to become an academy.”

Mr Russell-Moyle said: “It was a joy to meet and spend time with the children and staff at Moulsecoomb Primary, a school which is doing fantastic work despite the challenges posed by years of cuts to the education budget by this government.

“Mr Sutton and the rest of his team are doing a fantastic job, which is plain to see to anybody who witnesses the energy and enthusiasm of their pupils.

“It is clear to me that Ofsted is no longer fit for purpose when a unique and inclusive school like that of Moulsecoomb is branded ‘inadequate’ because it does not fit into their narrow checkboxes.

“I will fight tooth and nail to make sure that our local school remains embedded in the community and is not handed over to some distant and unwanted multi-academy trust.”