Fire crews spent the night making sure a blaze in a block of flats in Brighton was properly put out.

Update (10:00)- We currently have two appliances and an aerial ladder platform on scene at Pankhurst Avenue, #Brighton. We expect to have a presence there for most of today.

This morning an aerial ladder platform and two other fire engines were still at the scene.

They were called to the flats in Pankhurst Avenue, Brighton, shortly after 8.30pm last night (Friday 20 September).

The road was still closed this morning (Saturday 21 September).

At least 10 crews were sent to tackle the blaze which could be seen across much of Brighton.

Two aerial ladder platforms were used as part of the efforts to fight the fire.

Gas and electricity supplies were cut for some of the surrounding homes as the area was made safe.

SGN (Southern Gas Networks) said it may be 48 hours before supplies can be reconnected.

Residents of the flats were housed temporarily at the Edge Community Centre near by.

East Sussex Fire and Rescue Service said last night: “We were called today at 8.38pm to attend a residential block of flats on Pankhurst Avenue, Brighton, following reports of a fire. 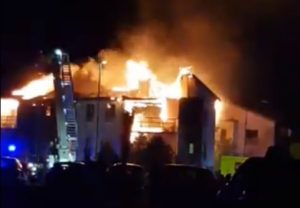 “Firefighters are using two aerial ladder platforms to combat the fire together with hose reel jets.

“We are advising all nearby residents to keep their windows and doors closed as a precaution.

“All evacuated residents have been provided with temporary accommodation at a local community centre.”

At 12.38am this morning the fire service said: “We are still on scene at the fire on Pankhurst Avenue, Brighton.

“We have scaled down to three appliances and two aerial ladder platforms.

“Firefighters will be on scene throughout the night.

“We have been informed that Southern Gas Network will be cutting the supply of gas to the Pankhurst Avenue, Brighton area.

“This will affect approximately 20 properties in the vicinity.

“It is likely that the supply will not be reconnected for at least 48 hours.

“We would like to thank West Sussex Fire and Rescue, Sussex Police, Brighton and Hove City Council, Secamb, SGN and the local community for all their efforts in supporting us with the incident.”