Slade pack out Concorde 2 in Brighton 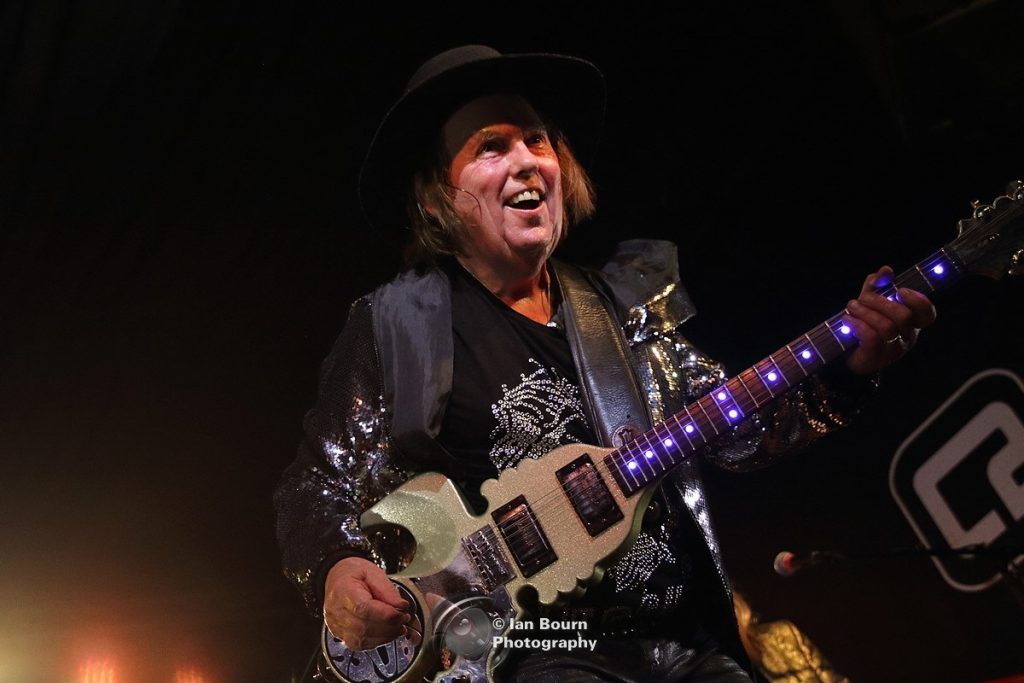 Dave Hill from Slade live at the Concorde 2, Brighton 21.09.19 (pic Ian Bourn Photography) (click on the pic to enlarge!)

Former Glam Rockers Slade were back in Brighton tonight after a gap of nearly three years. This particular Concorde 2 show had to be rescheduled from Saturday 29th December 2018 as drummer Don Powell had collapsed in Peterborough railway station and at the time the band’s statement read “Don Powell, Drummer was admitted to hospital last night with suspected snapped tendons. Don will have surgery today and further details will be released in due course”. It was planned that Don would be able to return and go out on tour again and be with us here tonight, but sadly guitarist and founding member Dave Hill informed us that the physio concerned has stated that Don still isn’t quite well enough to tour, but they do expect Don to return soon. This was a disappointment, but obviously health comes first!

To be honest, Don is fortunate to still be with us as he was involved in a terrible car accident in the band’s hometown of Wolverhampton in 1973, when Don’s fiancée Angela Morris was sadly killed and Don sustained serious injuries. He broke both of his ankles and five of his ribs. Surgeons had to drill into his skull to ease the internal pressure and he was unconscious for six days.

Mind you, Dave Hill had been in the wars too as had fractured his elbow after he collided with a cyclist near the Grand Hotel whilst out walking in Brighton on 23rd December 2016. This unfortunate occurrence was according to my friend catalogued in Dave’s book – ‘So Here It Is: The Autobiography’, which you can snap up HERE.

I grew up listening to many Glam Rock band’s from the early to mid 1970’s and I can recall my old schoolmate Stephen Clarke being totally obsessed with Slade. They were that sort of band as they were certainly on fire during that heady period. They achieved no less than 17 consecutive top 20 hits and six number ones on the UK Singles Chart. The ‘British Hit Singles & Albums’ names them the most successful British group of the 1970’s based on sales of singles. They were the first act to have three singles enter the charts at number one. They were on fire!

This classic lineup of the band, being Noddy Holder (lead vocals/guitar), Dave Hill (guitar/vocals), Jim Lea (bass/vocals) and Don Powell (drums), remained together from their early incarnations from 1966 right up until 1992. With all six of the band’s chart-toppers were penned by Noddy Holder and Jim Lea. After twenty-five years with Slade, Holder left to pursue a career away from music, with regular stints as a radio presenter, television personality, actor and voice-over artist. Jim Lea then decided to leave after Holder as he felt that Slade was the four of them. 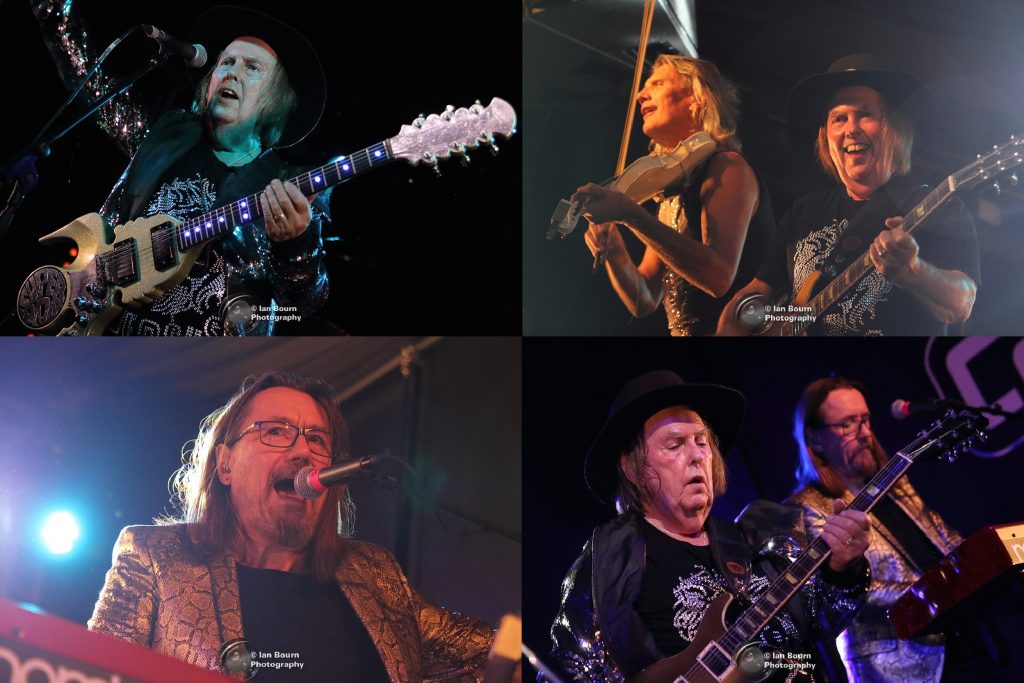 Tonight’s incarnation of the band is sole original member Dave Hill (guitar/vocals); John Berry (vocals/bass/violin), who has been with the band since 2003 and was previously in Mud from 1987 to 2005; new boy Brighton based Russell Keefe (vocals/keyboards) who came on board this year and was the keyboard player Les McKeown’s Bay City Rollers from 1991 to 2010; and stand in drummer Alex. Not exactly classic Slade is it?

It was therefore with some trepidation that I watched their relatively short 1 hour 14 minute set, which consisted of only 15 tunes from their 1972 to 1983 period. Sadly they didn’t play ‘Skweeze Me, Pleeze Me’, ‘How Does It Feel’ and not surprisingly ‘Merry Xmas Everybody’. We did get a number of hits, but myself and a number of others felt that there were some lesser choices.

Thankfully the quartet took to the stage 13 minutes earlier than advertised, which was promising and also the backing intro tape was mainly the ‘Thunderbirds’ theme, which was FAB! The DJ had also been playing classic 70’s tunes to further the mood. Being my first live encounter with Slade, would they actually sound like Noddy Holder or not was my worrying concern. I know people who simply won’t go as there’s no Noddy, but I wanted to make my own mind up.

They kicked off with ‘Take Me Bak ‘Ome’ with Dave Hill centre stage and Russell Keefe kicked off the vocals (whilst plinking away on his Nord keyboard), which was thankfully not too far away from Noddy. During the night the vocal duties were actually shared by Keefe and John Berry and weren’t too bad.

‘Lock Up Your Daughters’, ‘Look Wot You Dun’ and ‘Everyday’ came and went and then the crowd participation went into overdrive with ‘Coz I Luv You’. Clearly there’s still considerable luv present in the totally packed room for the band. Next up was the Celtic belter ‘Run Runaway’, which to my ears was more Big Country than Slade and was one of the choice cuts this evening. ‘My Friend Stan’ was up next and the keyboards could clearly be heard. ‘Far Far Away’, ‘The Bangin’ Man’ and the rock ‘n’ roll number ‘My Baby Left Me’ were played and then the set got better with ‘Gudbye T’Jane’ and an extended version of the classic ‘Mama Weer All Crazee Now’, for which Dave introduced us to his really snazzy ‘Super Yob’ Glam Rock guitar.

The feet stamping ‘Get Down And Get With It’ followed and the eager punters duly obliged by making as much noise as they could with their boots/shoes/trainers/stilettos and this was the cue for the band to leave the stage. But only very briefly as drummer Alex was back on in less than a minute and swiftly followed by keyboardist Russell. It was time for much arm swaying as ‘My Oh My’ was the selected track, but was eventually followed by the corker that is ‘Cum On Feel The Noize’. The ‘Mission Impossible’ theme was played on the backing tape and that was our lot at 9:46pm, with a 10pm curfew. Surely their might have been time for one or two more tunes?

I had waited a very long time to witness the band and to be honest I hadn’t enjoyed it as much as I thought I was going to. Now I know many did enjoy it, but I know I’m not alone, for instance Sonny Tyler posted about the concert “Slade were good but not as good as last time. Some strange song choices but good to catch up with everyone”. Plus Mel Gordine-Tyler posted “Slade last night were fun but won’t bother again, it was nowhere near as good as last time (2016), and don’t like the new vocalist. Still was a good night tho catching up with folks”. 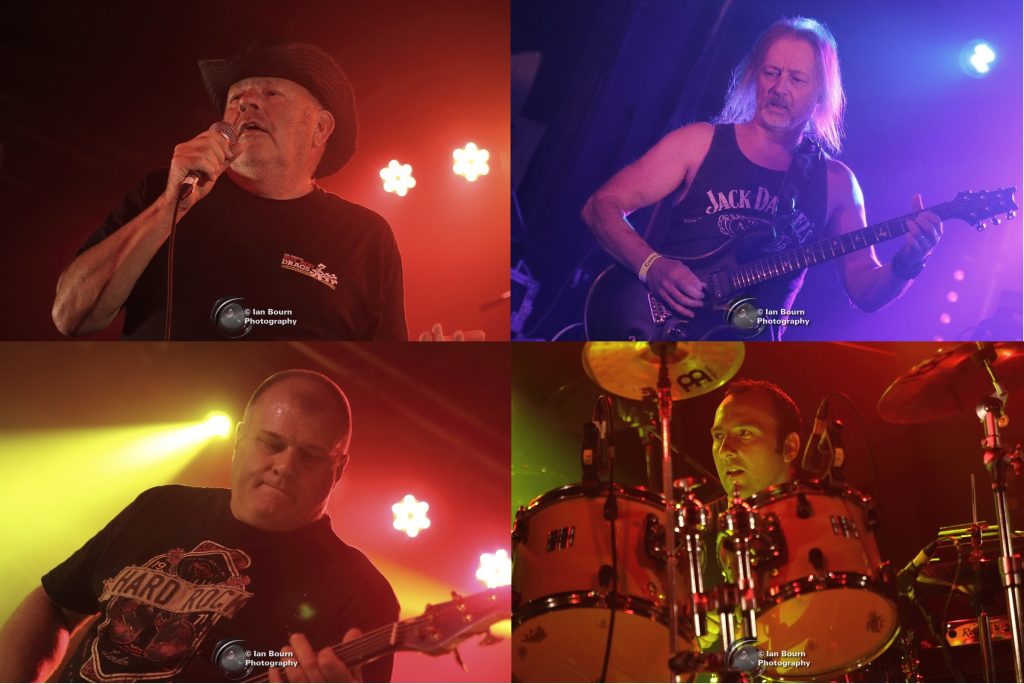 Support on the evening had previously come from the Dirty Shoes quartet who were offering up their high-energy hard rock covers. I have been aware of this outfit for 30 years now, having been invited to attend some of the early gigs by their Brighton born frontman Terry Smith when he was Sales Manager at the former Ford dealership – Henfield Motors. Terry is a very nice bloke by the way and tonight was (finally) my first live encounter with them.

I knew what they were all about, but hard rock is in the main not really my bag, but I entered the Concorde 2 with an open mind and willing to give them a go. I mean they have been on the case for 34 years now and so it is about time that I saw them isn’t it.

I hadn’t seen Terry for decades and hardly recognised him, but blimey can he sure belt out the notes – crikey! Matching Ronald Belford “Bon” Scott’s vocals on their cover of AC/DC’s ‘Highway To Hell’. Their rendition of David Bowie’s ‘Ziggy Stardust’ followed, which was OK, but their version of Golden Earring’s ‘Radar Love’ certainly took things to another level and the crowd were now well behind the band, despite them only being the support act.

Funnily enough, they too had a stand in drummer, who I believe was called Stuart McCall and he performed rather admirably, but I have seriously flag up, the band’s guitarist who I think was called David. Bearing in mind that heavy rock is not my bag maaaaan, I have to say that his guitar work was exceptional. The punters were really lapping it up. It’s fair to say that there was a ‘Whole Lotta Love’ for him, a famed Led Zeppelin number that they took on tonight. Their bassist I believe has been with them for 25 years now and so they are a well rehearsed unit. Their ‘Rebel Yell’ Billy Idol medley went down well too.

Seems that they are certainly in demand as they had to hot leg it to The Duke Of Wellington in Shoreham as they were playing another set over there too this evening.

After the Dirty Shoes set, I was discussing with tonight’s promoters, Black Rabbit Productions, the benefits of re-booking Dirty Shoes again for another similar concert! Fingers crossed! 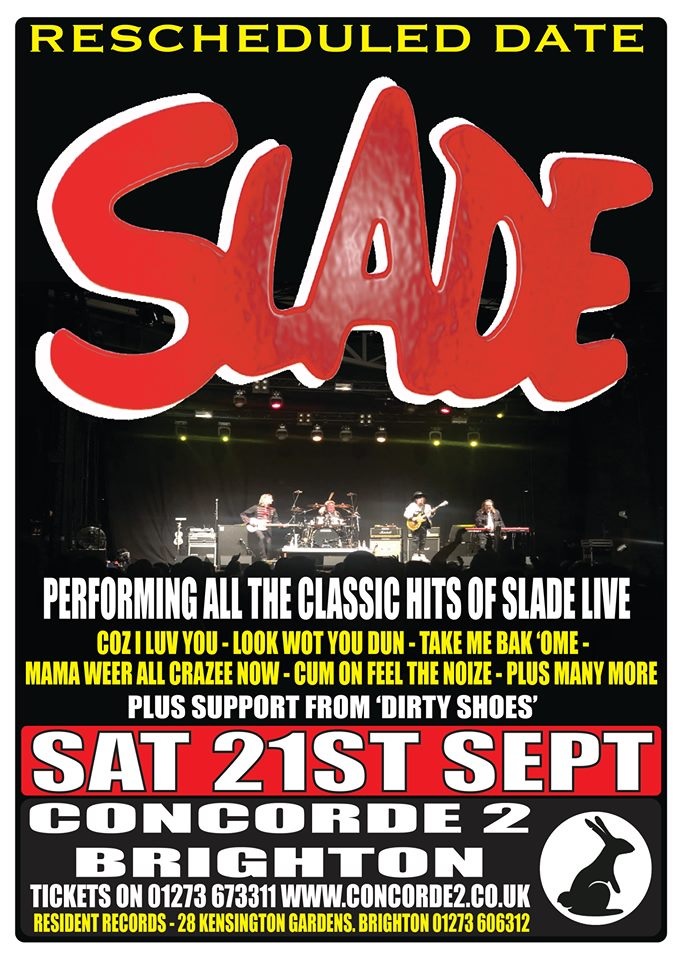