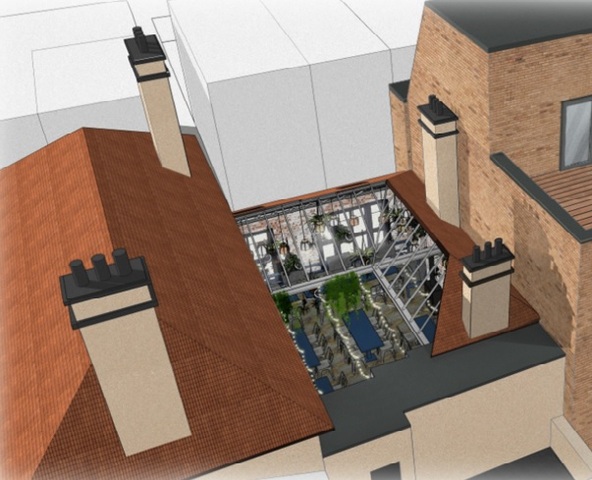 An artist’s impression of the Eagle terrace

Neighbours are opposing plans for a roof terrace on a city centre pub.

Indigo Pub Company, owners of the The Eagle in Gloucester Road, want to remove part of the roof over a disused function room to create a partially covered terrace.

Brighton and Hove City Council Planning Committee is advised to approve the plans despite eight letters against the scheme from neighbours.

They are concerned about noise and cigarette litter from people using the roof.

One neighbour whose details were removed from the council’s planning website, said: “I believe it will massively impact on the peaceful environment we enjoy as occupiers of Gloucester Yard, particularly in the the late evening when people are trying to sleep.

“Drinking inevitably causes groups to become very loud in their conversation and there will be no way of preventing it if permission is granted.”

Another neighbour wrote: “The proposed open terrace will bring significant noise, smoke and food smells into the neighbouring residential Gloucester Yard where we live and impact on both our enjoyment of our property and it’s value.

“Noise reverberates around the yard and the current tranquil position will be destroyed with the noise from drinkers until late into the night.”

In the report going before the committee, the council’s environmental health department said there is a “risk of noise and light nuisance to neighbours”.

It recommends closing the terrace between 11pm and 7am and keeping numbers down by allowing “only the number of people seated at tables set out to fill the area”.

The work is part of a refurbishment of the 1854 pub. It was extended into a two-storey shop building to the west in 1967.

In its design statement Indigo said: “It is anticipated that use of the proposed first floor terrace will result in fewer customers using the pavement area in front of the pub on Gloucester Road as a drinking and smoking area, with benefits to residents of nearby properties.”

The company adds: “The facades of the property will remain as existing and will be subject to the works described above, which will generally enhance the building and its effect on the wider Conservation Area.”

The Planning Committee meets in public in Hove Town Hall from 11am on Wednesday 9 October.