Yak milk the high life and leave the herd behind 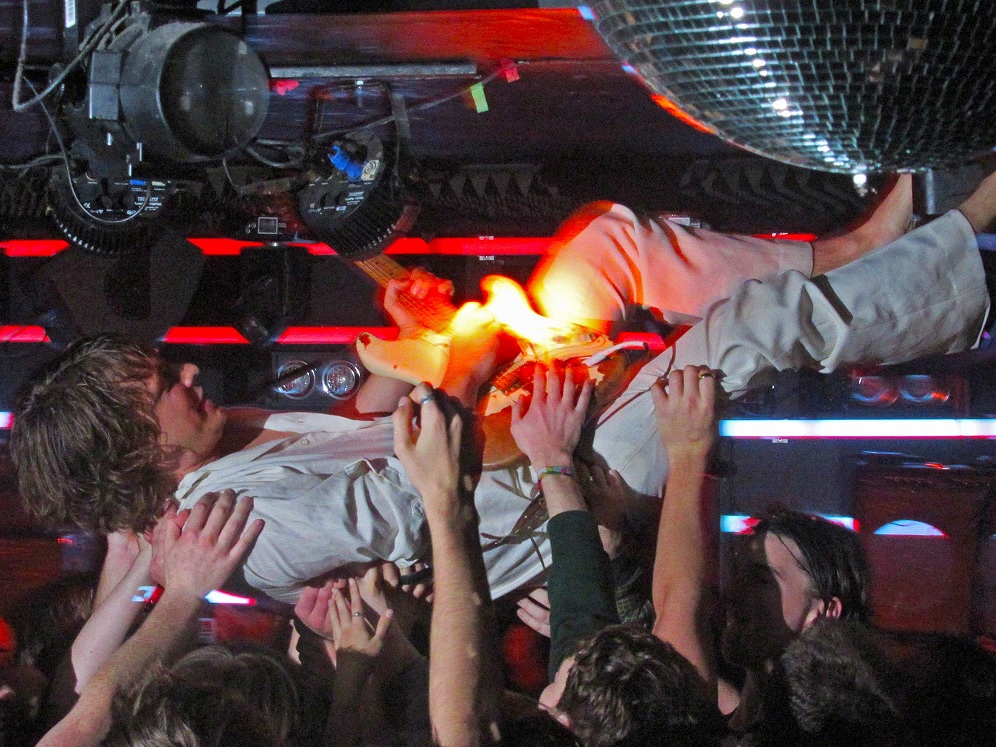 A yak is a pretty cool animal to name a psychedelic band after, being rather hairy and freaky looking, and living very high. I don’t know much about the lifestyle of Yak the band, but the London based trio have a psych tinged sound that, on record, flits between dreamy sunshine pop and thrashing sonic assault, with occasional forays into a sort of whimsical nostalgic melancholia, reminiscent of early Pink Floyd.

They have released two albums to considerable plaudits, for the second securing a record deal with Virgin/EMI, and their most recent EP, ‘Atlas Complex’ was partly recorded at Jack White’s Third Man Records in Nashville. There are hints online that this current run of dates will be the last for a while, so there’s a buzz of anticipation about tonight. I’m really looking forward to catching their full live set.

Tonight’s show is at Patterns on Brighton’s seafront, and comes courtesy of local promoters Neat Neat Neat. The basement venue is usually a nightclub, and the black decor and funky lighting reflect this. There are a few stepped levels, which form a sort of amphitheatre around the small stage, allowing the less tall audience members to see over lanky sightline obstructions like myself. The stage is back lit with long fluorescent tubes which change colour, and a row of moving head fixtures directly above the performers. Thumbs up to the venue for the powerful air-con units down the front. It’s nice to be at a gig and not feel too hot for once. 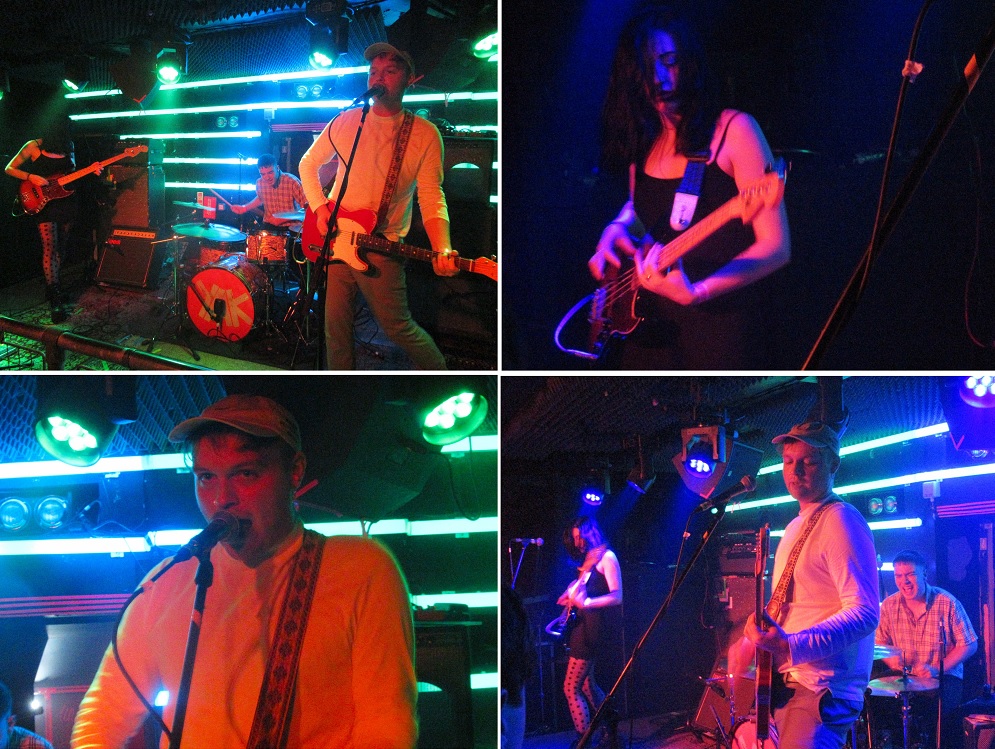 First up are Demonstrations, a young local band, and I like them straight away. They play in Brighton often, and if you haven’t caught them already they’re a guitar led trio with an 80’s indie vibe. There’s also a hint of rap thrown in amongst some interesting rhythms. Luke is the lead singer, sporting a baseball cap and firing staccato chops from a red Telecaster with a hint of chorus effect. House left is Jess, popping octave licks from a dark sunburst Jazz bass. She has a short black dress and long black hair, and is really going for it. Behind the kit is Callum, wearing a checkered shirt and a broad grin as his fills scurry around the toms.

There’s a plenty going on. Opening number ‘Extradite’ is semi-rapped, and leads into ‘Caught In A Dream’, where the vocals soar by way of contrast. There are some interesting stops and stabs, and the band sound tight. ‘Carbine’ is built around a satisfyingly funky bass riff. They introduce some new songs which feature sequenced keyboards and synth sounds. Drummer Callum dons headphones to follow a click track. The first, appropriately titled ‘Click Out’, works particularly well, with an exotic, Arabic sounding riff dancing over the keyboard lines. The rapped vocal hints that it might be autobiographical. I catch “Hello, this is Luke from Sky Bet”, which makes me smile. The standout track of the set for me is ‘King Craig’, in which the guitar gets busy and the rhythms get complex. It reminds me of the glory days of XTC.

Demonstrations have gigs coming up at The Prince Albert on 21st November, and a headline show at The Green Door Store on 2nd December. I for one would like to see them again. 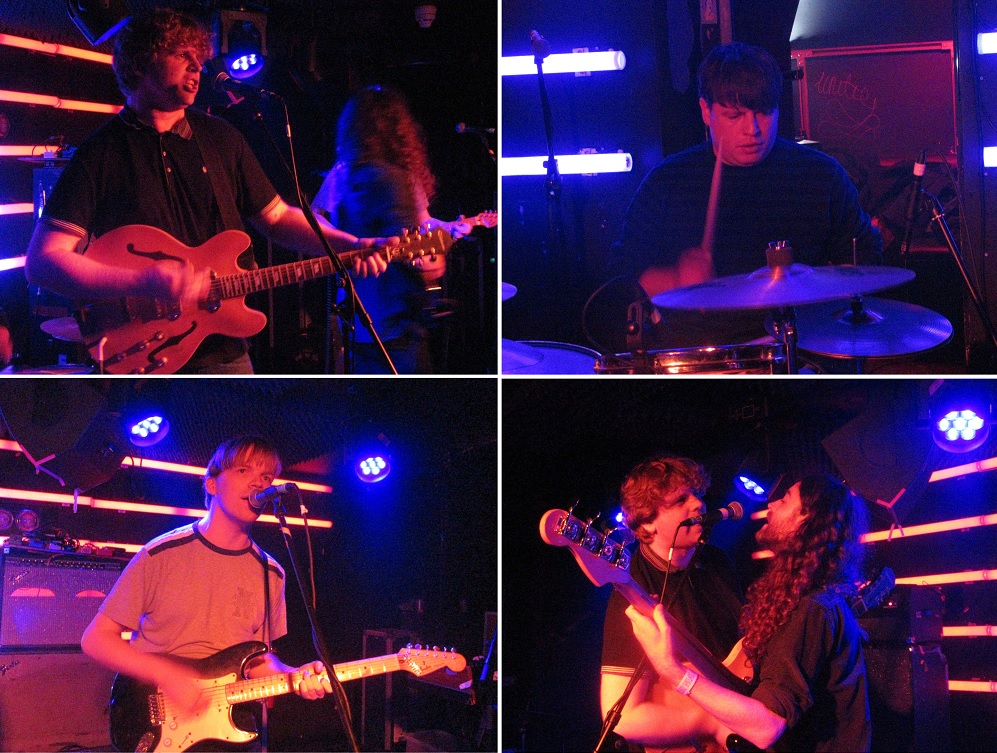 Next up are The Roves, a four piece from North London playing jangly guitar pop. I can see the thinking behind putting them on the bill, given that they have a retro 1960’s vibe, but the controls of their Tardis have taken them a bit too far back in time, having bypassed the psychedelic era and located themselves at the Merseybeat end of the decade. It’s all well done, with some great songs and vocal harmonies, but I get the impression that it doesn’t quite fit with the audience’s expectations and the response is a bit flat.

The band has released two albums, a fine selection of classic pop songs. They do the three vocalists into two microphones thing, Beatles style. Lead singer James Wing wields an Epiphone semi-acoustic. House right, his younger brother Tom favours a black and white Stratocaster and bears an uncanny resemblance to Guy Chadwick from The House Of Love, which amuses my companions and I. Between the guitar brothers, bearded bassist Luke bobs energetically, his dark corkscrew locks cascading as he grooves, and behind the kit, Brendan Monahan has that classic 1960’s drum vibe with plenty of smooth brisk fills.

Standout numbers for me are ‘Everybody’s High’, with great hooks and rhythm, and ‘Fear’, where Tom puts down his guitar to shake some action on a tambourine. Best of all is closing number ‘Fixing To Burn’ which has loads of energy and a delicious descending riff with a garage psych vibe that is much more my thing. More like this, please. 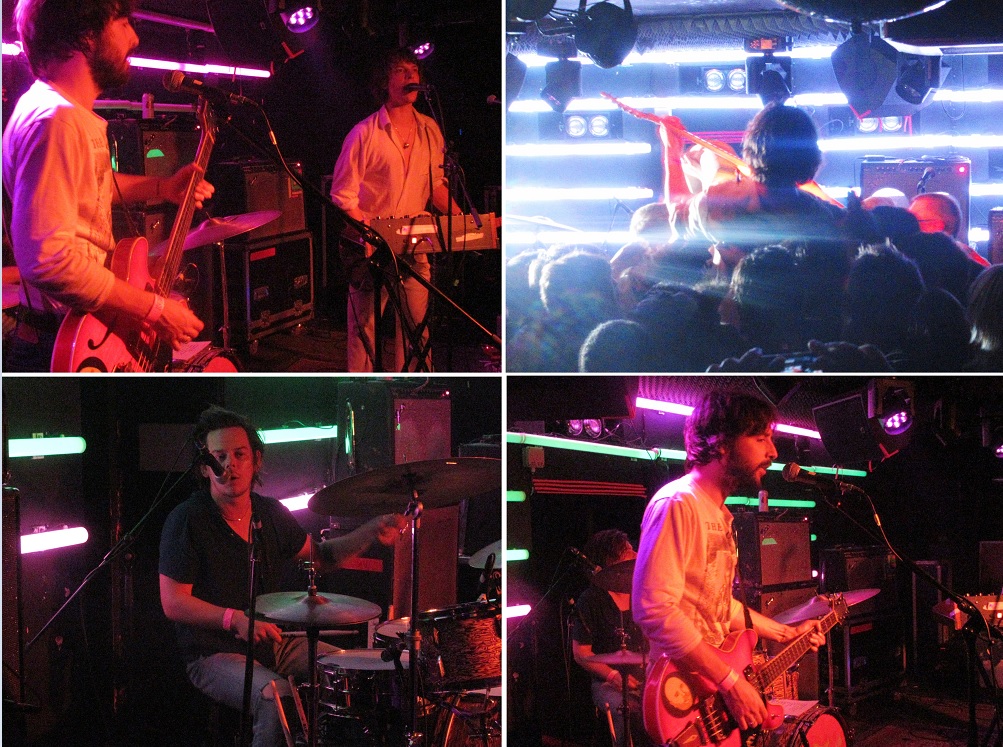 A lot of people have either recently arrived, or come back from smoko, as the room has suddenly become very full. I sneak a look at Yak’s setlist, and surprisingly it doesn’t feature any numbers from the new EP, which you might reasonably imagine this tour is to promote. Anticipation builds as a mesmeric synth intro drones around the venue, and I’m thinking back to seeing the band play an in-store at Music’s Not Dead in Bexhill last February. On that day they played a very mellow and introspective set, sitting down. Would it be like that tonight?

Er…no. Ever been to a psychedelic gig with a mosh pit? I’m not sure I have, so this is a first. The band takes the stage, the synth drone morphs into ‘Heavens Above’, and the crowd goes absolutely crazy. The energy is amazing. To set the scene, house right we have Oli Burslem on lead vocals, guitar, and occasional twiddling of an analogue synth with chunky controls. If you imagine what a classic rock star looks like, you won’t be far off. Think Mick Jagger’s cheekbones and Tom Verlaine’s haircut, standing barefoot, clad in white linen and toting a matching white Stratocaster with the nonchalant swagger of a young man who knows he’s got it going on.

House left, Vincent Davies cuts a thin, angular and very mobile figure with a red Epiphone semi acoustic bass. He has dark hair and a beard, and sportingly wears a long sleeved T-shirt from The Roves’ merch stand. Elliot Rawson drums left handed with considerable force and admirable fluidity, his floppy hair flying as he flails around the kit.

‘White Male Carnivore’ is another number from the sonic assault end of the Yak spectrum, and Oli is reaching into the crowd, who dance with a frenzied ecstasy. ‘Harbour The Feeling’ is another urgent and intense number, driven by a thumping floor tom. ‘Layin’ It On The Line’ is slightly more languid, but its lilting rhythm is still very danceable. There’s a chance for a breather with ‘Pursuit Of Momentary Happiness’, the title track of the second album, then we’re right back into it with the insistent hook of ‘Bellyache’.

For a three piece band in a smallish venue, the sound is absolutely massive. The bass speakers are really moving some air. There’s an awful lot going on, with trippy guitar and keyboard sounds, and lush vocal harmonies. To my ears, this is psychedelia, but played with such energy and intensity that people are crowd surfing! For ‘Fried’, Oli looks every bit the rock star instigating a crowd singalong. ‘Blinded By The Lies’ is another full throttle number, and they slip back into it at the end of ‘Victorious (National Anthem)’. By now, the sound has transitioned from massive to monstrously sublime.

If I seem overly effusive about Yak’s set, you needed to see the closing number, ‘Hungry Heart’. Oli Burslem crowd surfs playing his guitar. Back on stage, he passes the instrument to a member of the crowd and shows him the riff. With the audience member keeping the guitar going, Oli moves to the synth and sets up a mesmeric throb with a Krautrock vibe, which he then raps to on another crowd surfing foray around the room. Back on stage again, he takes back his Strat from the plucky punter who’s been chugging the riff, and launches into an absolutely blistering solo. I’ve been going to gigs regularly for over forty years, and I’ve seen some pretty cool stuff. Let me tell you, this was right up there.

As the lights go up at the end of the set, everyone I speak to is absolutely knocked out by the quality of Yak’s performance. For a rainy Wednesday evening, it’s been quite a night. If the band are taking a break, I hope it’s not for too long, because they are absolutely at the top of their game right now. 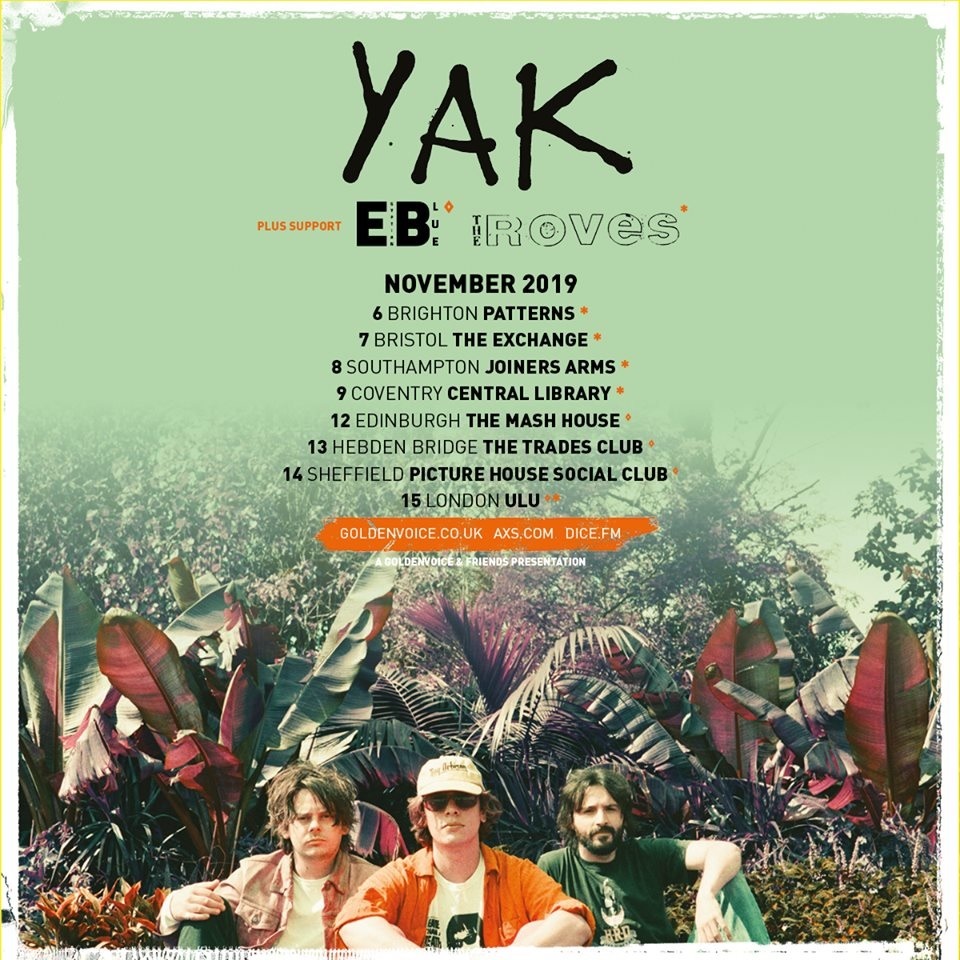