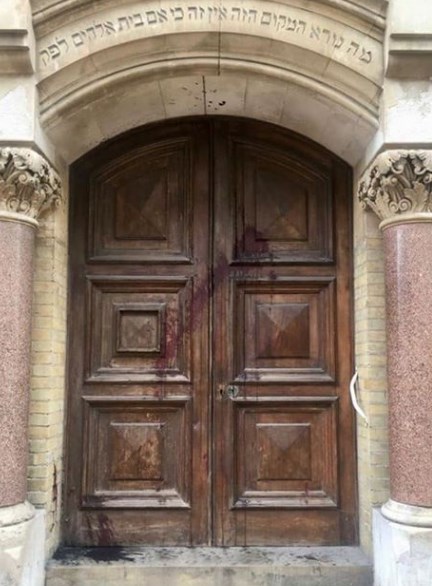 Concerns were raised by the city’s Jewish community after pictures of what was thought to be a hate crime circulated on Facebook and were reported by local media.

The Sussex Jewish Representative Council was also concerned that posters advertising social events put up with heavy duty adhesive appeared to have been ripped down after being put up at the end of last month.

But today, Sussex Police said CCTV footage shown they came down during the storm on Saturday, November 2.

A spokesman for Sussex Police said: “This hadn’t been reported to us, but it had come to our attention and we visited the synagogue over the weekend.

“However, it appears that the ‘paint’ was a red drink and given the central location, this was not taken to be malicious.

“It was also suggested that posters were ripped down outside the location, but CCTV shows this to be caused by the weather.”

A spokesman for the Sussex Jewish Representative Council said: “We are relieved to know that the substance thrown at the doors of Middle Street synagogue was only a drink and, given the location, in the heart of the Brighton night-time economy, has been deemed not to be targeted or malicious.

“However, this only highlights the high level of tension and fear that exists within the Jewish community currently that so many people jumped to the assumption that this was an antisemitic incident.”