Defiant election candidate vows to carry on despite death threat

A defiant general election candidate has vowed to carry on despite receiving a death threat and having a tyre on his car slashed. 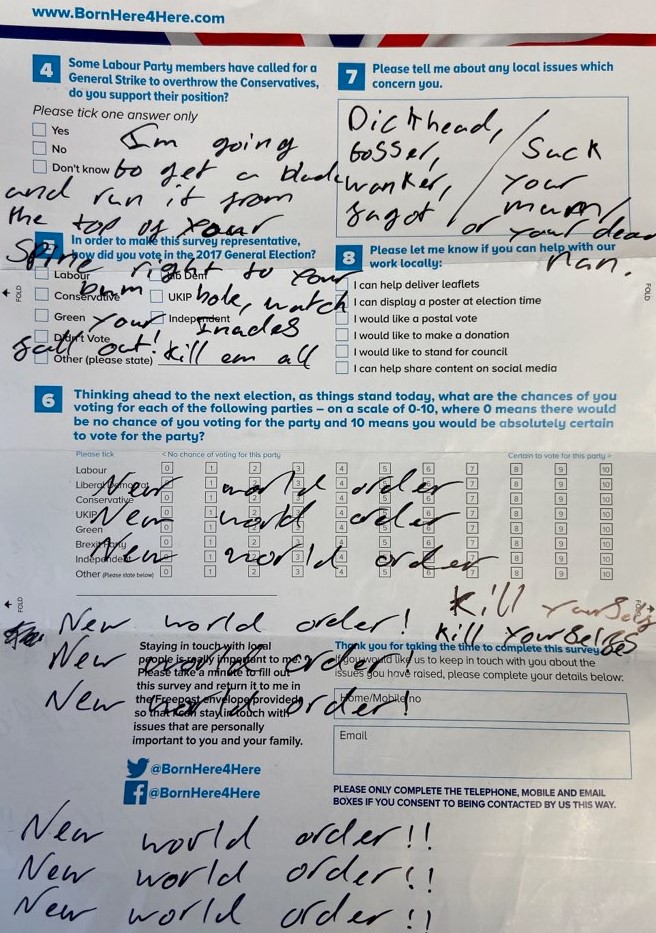 Joe Miller, the Conservative candidate for Brighton Kemptown, said: “I will not be intimidated off the streets of the area in which I grew up.”

The death threat said: “I’m going to get a blade and run it from the top of your spine right to your bumhole, watch your insides fall out. Kill em all.”

It also said: “Skin your mum.”

It was scrawled over a leaflet delivered in the Moulsecoomb and Bevendean area by Councillor Miller, who represents Rottingdean Coastal ward on Brighton and Hove City Council.

It contained other obscenities and the matter was reported to Sussex Police who said: “On Monday (11 November) we were informed that a leaflet containing written threats and abuse had been received at the office in Peacehaven, East Sussex, of the Conservative candidate in the Brighton Kemptown general election campaign.

“The leaflet is being examined and an investigation is under way.”

Councillor Miller, 25, said: “This death threat towards myself and my family is very threatening and frightening. My family, friends, volunteers, colleagues and I are now concerned for our own safety.

“This has no place in our United Kingdom. Of course people can disagree with others. That is the wonderful thing about living in the best democracy in the world.

“But to go to these lengths in my view is entirely unnecessary and intolerant. This is neither kind or gentle.

“This is in addition to a pattern of other intimidating behaviour. A young volunteer had a Conservative branded carrier bag of envelopes snatched out of his hands and thrown in a bin (which we subsequently found), my car tyre being slashed, the lock to our office being forced, myself being signed up to four opposition parties, the threat of a Staffy dog being set on another volunteer and a leaflet being thrown back at another volunteer after a resident drove at them to do so (rather than recycle it).

“I will not be intimidated off the streets of the area in which I grew up in and love. I will continue to try my best to speak to as many neighbours in Brighton Kemptown and Peacehaven that I can between now and Thursday 12 December so we can get our country on the road to a brighter future that is so desperately needed.

“I will not be distracted from our positive and optimistic campaign. 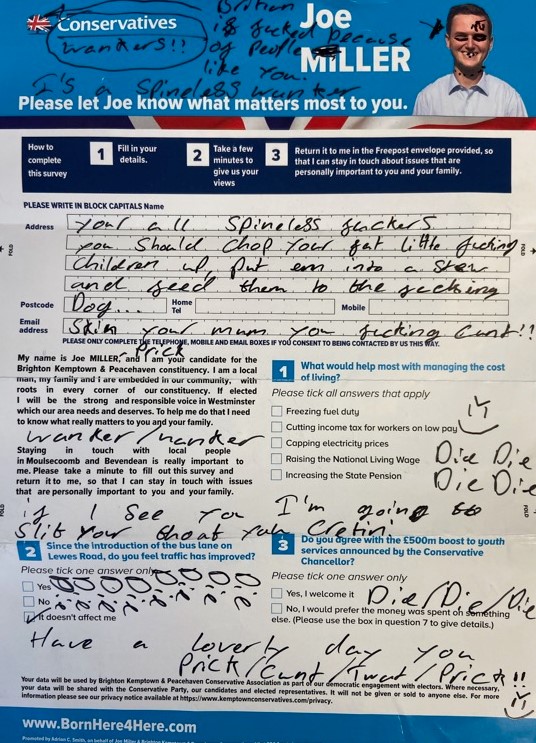 “The police are advising me accordingly and are taking this matter seriously to find the perpetrators of these cowardly acts in response to our survey where we were only asking to hear residents’ views in Brighton Kemptown and Peacehaven so if elected to Westminster I can be the strong voice they truly deserve.

“I would like to thank Sussex Police and their officers for their work, advice and assistance in this matter, and across Brighton Kemptown and Peacehaven daily.”