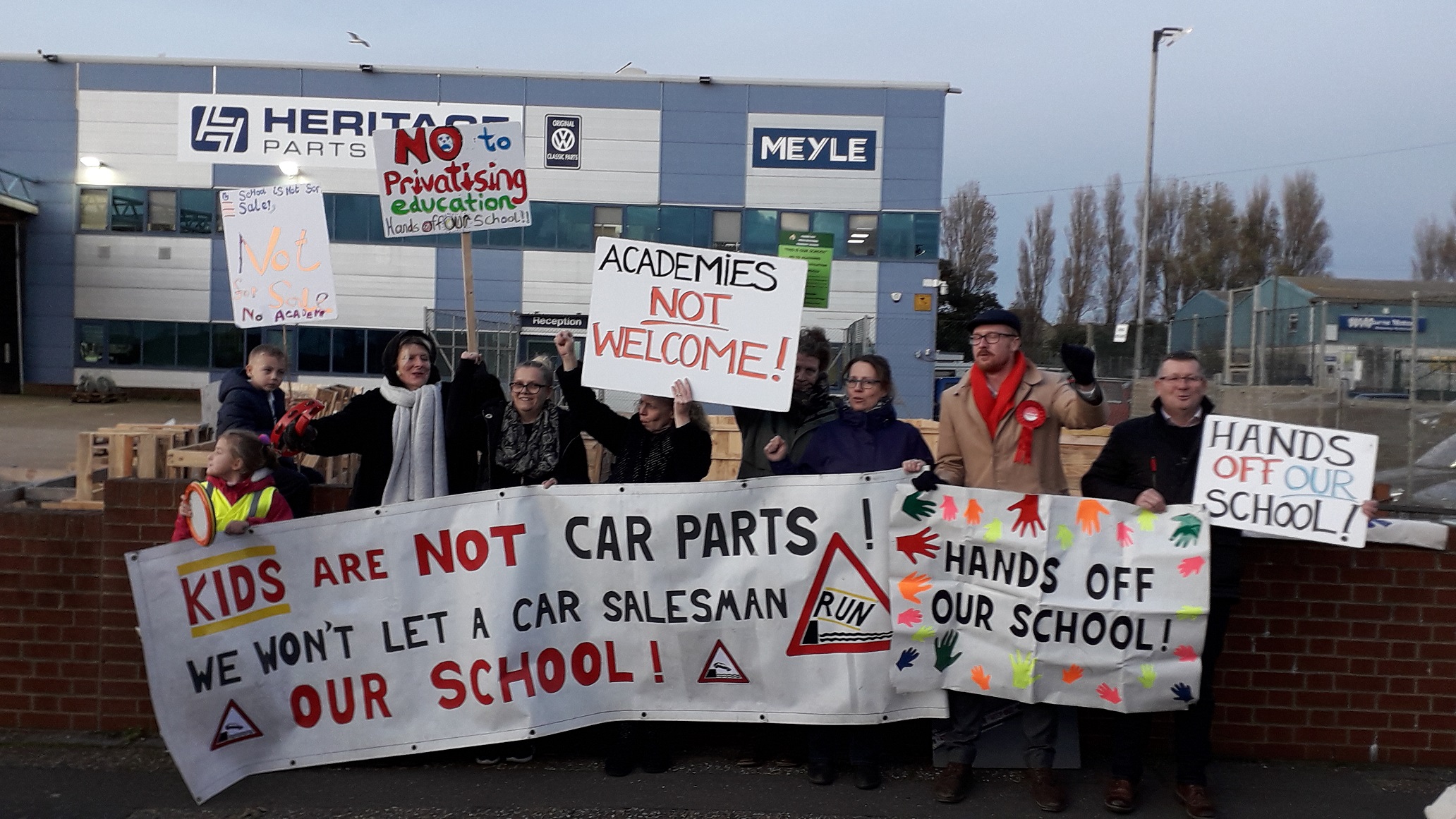 Parents trying to stop the takeover of their primary school by an academy trust protested outside the workplace of one of its trustees.

Meanwhile, members of two out of three unions representing staff at the school – the NEU and GMB – are set to walkout this Thursday in protest at the plans. Members of the third, Unison, have also voted unanimously to strike, but the result has come too late for them to strike this week.

New Horizons was this month named by the government as the sponsor set to take on Moulsecoomb Primary School following an academy order issued in the wake of an Ofsted rating of inadequate in May.

The trust has come under scrutiny after it was revealed it had to hand over another school it converted last year after more than half the staff quit, with the trust taking over the reigns, Durrington Multi-Academy Trust, hinting at financial mismanagement.

The trust denies this, saying that the takeover of The Laurels in Worthing failed because the staff’s “values did not align” with the trust’s.

Its other school, Seaside in Lancing, was taken over in 2016, following an Ofsted inspection which rated the school as outstanding, up from a previous rating of requires improvement.

The head of that school before and after it voluntarily became an academy, Lee Murley, is now New Horizons’ director of education.

Following Wednesday’s protest, parent Ulrike Hofmann said: “Ultimately, we are opposed to the privatisation of our school and will fight against any trust chosen to take over our school, but New Horizons Academy Trust is not fit for purpose.

“The only school they currently run has never been inspected by Ofsted. The only other school they have previously run was transferred to another trust after they made a mess of it.

“This is blatant favouritism from the Government towards the academy model, when they are trying to push through the privatisation of Moulsecoomb Primary School without any chance to prove that we are not inadequate.”

Parent campaigner, Natasha Ide, who also attended the protest said: “We had an amazing turnout for the protest and our message was loud and clear. Along with our kids, we handed out flyers to cars and passers-by.

“We were really encouraged by the beeping of horns and conversations that we had. “We don’t want to be standing outside in the cold protesting, but we did it because we care so passionately about this campaign. If we have to, we will do it again.

“All we ask is for New Horizons Academy Trust to listen to the wishes of parents and walk away. They chose to be the sponsor for our school, and they can choose not to be.”

Lloyd Russell-Moyle, who is campaigning to be re-elected as MP for Brighton Kemptown, provided lifts to some of the protesters. Of the protest he said: “No academy trust, great or small, is welcome in Moulsecoomb. Parents and staff have categorically rejected this forced academisation and I wholeheartedly support their campaign to keep our local school democratically accountable.

“It was an honour to be part of this protest and meet again such incredibly dedicated and passionate parents.”

Speaking about next week’s strikes, a spokesman for New Horizons Academy Trust said: “We are saddened by this move. We have been very clear that we want to work in close collaboration with parents, staff and the whole school community to continue the positive work already taking place at Moulsecoomb so that its pupils get the very best education and chance to succeed.

“We hope everyone agrees that the top priority for us all is to support the school to rapidly improve and we have always been of the view that this is best achieved through joint working.

“Every school, like every child, is different, but we hope that, with everyone’s support, we can replicate the same success and positive outcomes at Moulescoomb that we have nurtured at New Horizons Seaside.

“We have the capacity and expertise to do so and know that we can make a very positive difference for the school and its children, which is our only motivation.”

He added: “All appointments are made following open recruitment to ensure the best people work in our Trust and schools. Both deputy heads started their roles when the school was in local authority control and before their parents were involved as trustees. They are outstanding school leaders and we are proud to have them with us. Mrs Murley is also an outstanding teacher working with us on merit.

“Simon Wood has a superb track record of taking schools from Inadequate or Requires Improvement to Good or better and was appointed Executive Headteacher of his school in late 2018, specifically to turn it around as it had been identified by the Trust as at risk of being placed in an Ofsted category.

“Ofsted has been very clear in its reports after the two monitoring visits that under his leadership, the school is now moving forward very positively and is taking the action needed to improve.

“As part of our work with Moulsecoomb Primary, New Horizons will be drawing on Simon’s expertise in turning around schools.”