We experience ‘Joyland’ with TR/ST 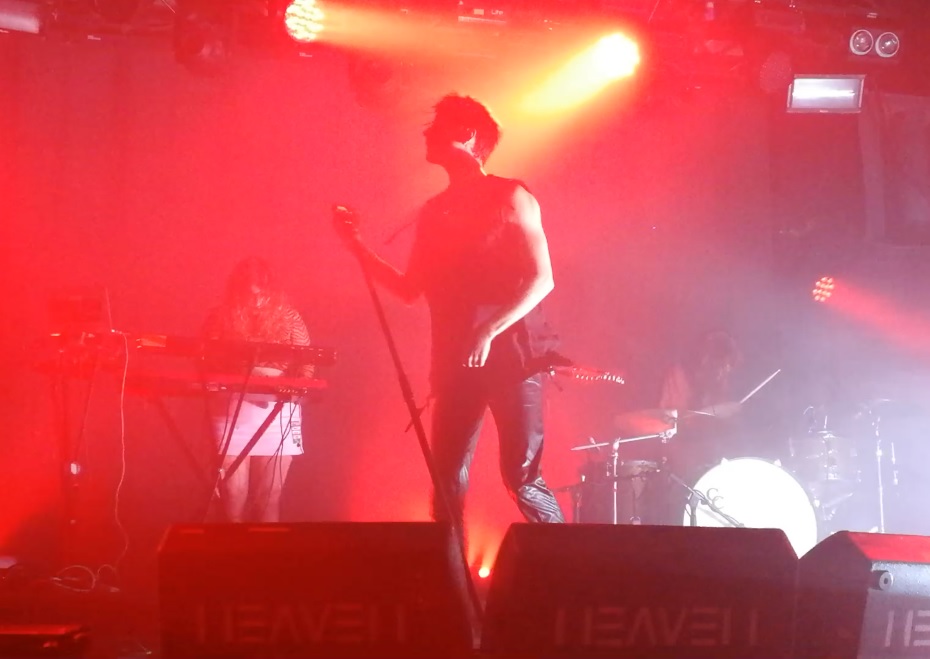 When a Canadian music artist you have seriously been into for five years announces a selective 5-date European tour with just a sole concert in England, then it makes sense to go and give them your support. The act in question in this instance being darkwave champions TR/ST.

I’m honestly not expecting everyone to have ever heard of TR/ST, who is sometimes referred to as ‘Trust’, but there are over 80,000 followers on the official Facebook page, so clearly an impact has been made somewhere across the globe. Fact is that you may well be missing out on a truly enthralling and unique artist.

TR/ST was formed in January 2010 and is the dark electropop project of 31 year old Toronto artist Robert Alfons (real name Robert Hiley). It was initially a collaboration between him and Austra’s drummer Maya Alina Postepski – who incidentally we saw live at Patterns in Brighton on 21st March 2017, read the review HERE.

These days however, Robert is accompanied by Lia Braswell (drums) and Esther Munits (keyboards) when performing live shows. Last month (October 2019) saw TR/ST touring the USA on the ‘Sex Cells’ 2019 tour with Marc Almond. Tonight the TR/ST live trio are playing Heaven in London, which is rightfully known as a long standing gay club mecca for the city. 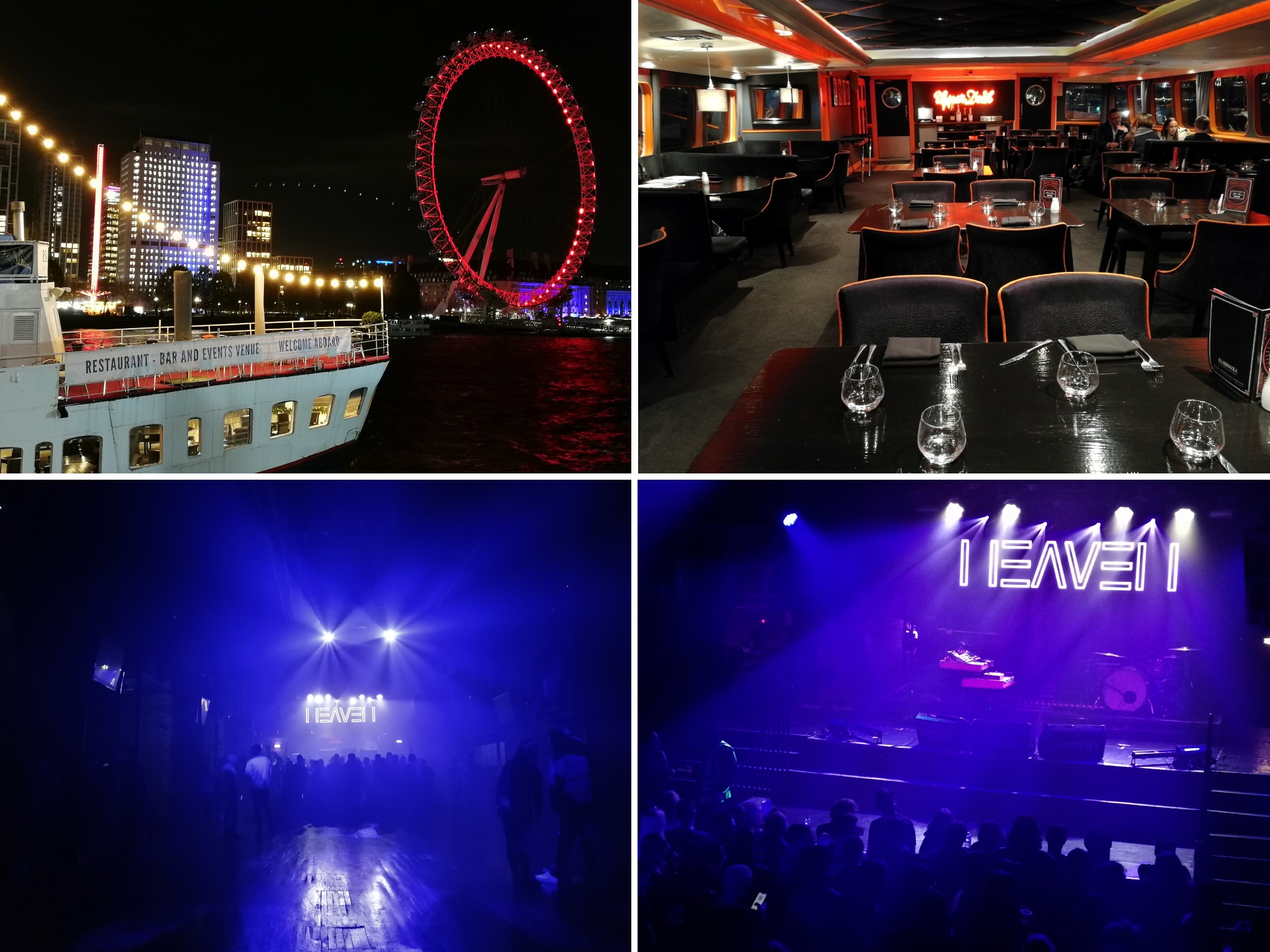 Prior to the concert starting – drinkies on R.S. Hispaniola and Heaven venue shortly after opening (pics Nick Linazasoro) (click on pics to enlarge!)

Luckily for us, it is located a stone’s throw away from Embankment Tube Station, which in turn is located virtually opposite the rather wonderful R.S. Hispaniola, which is stationed on The Thames. So prior to our evenings entertainment, we wet our whistles on board the lovely boat and then headed off to Five Guys in order to soak up the alcohol with a lush hamburger (accompanied with fries which were cooked in peanut oil), with a helping of free peanuts. Tell you what, ever had fries cooked in peanut oil and peanuts one after another, it’s terrific.

Suitability primed, we headed off to Heaven, which is a cavernous building. I asked one of the staff, what the original purpose of the building was and he informed me that they were historically used as wine cellars. The venue is not dark and dank, but adequately lit with a modern vibe almost like a bohemian museum.

Without further ado, it was time for the three people to grace the stage, which incidentally is situated at one end of the building, but on a much higher level than the punters, thus we were all looking up in awe!

There’s not really any artists around that I can immediately think of who sound like TR/ST. Robert Alfons vocal range is quite astounding! When I initially heard his lush compositions five years ago on the two albums that I purchased, 2012’s ‘TRST’ and 2014’s ‘Joyland’, I really was under the impression that I was listening to two different people! Then it dawned on me after some time that it was in fact one and the same person. How can anyone sing so high one second and so low the next? It’s truly astounding. In fact Alfons sees it as an instrument in its own right.

TR/ST songs are virtually all rather absorbing and to be rather blunt about it, I haven’t got a single clue whatever he is singing about or often what the title of that particular song is, but the music is captivating and many a time have I played my now three albums, having added 2019’s ‘The Destroyer – Part One’, (which interestingly was partly recorded in a 150 year old farmhouse north of Toronto) and immediately put them straight back on for a second outing. Having heard them many times, it’s fair to say that they are not earworms, where you suddenly find yourself singing them afterwards. TR/ST material is not immediate, like so many pop songs down the years. They are not throwaway like ‘Agadoo’, they are more cherished like ‘Are ‘Friends’ Electric?’ or ‘Atmosphere’ (Joy Division’s one not Russ Abbot’s). With only Alfons really knowing what the hell is going on during each expertly crafted aural pleasure. 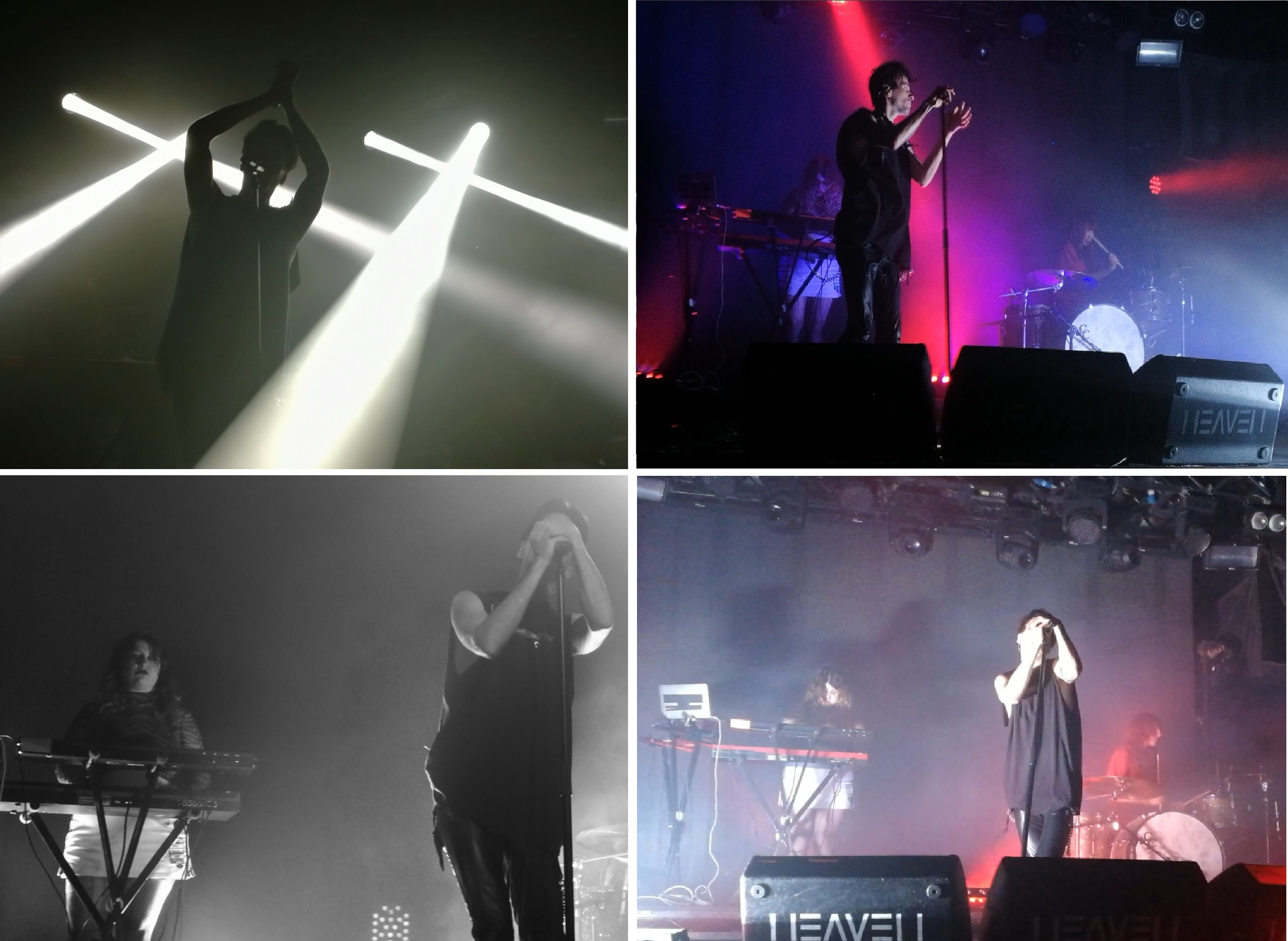 Tonight, I should be rather miffed, as TR/ST single-handedly ensured that they would omit virtually all of my very favourite tunes by them. There was no ‘Slightly Floating’, ‘Are We Arc?’, ‘Icabod’ or ‘Control Me’, but it really didn’t matter one iota. We were here watching them in the flesh, as Alfons pranced up and down the stage akin to fellow Canadian Darrin Huss (of Psyche fame) meets Marc Almond, whilst Lia was keeping time on the drums and the wonderful haunting keyboard work of Esther topped it off rather nicely indeed thank you. The lighting was rather atmospheric and so we often couldn’t really clearly see the trios features and the lights behind them were blinding, plus Alfons would rest his hands on the mic stand thus obscuring his face, which certainly made photographing them a challenge!

There was no wasted banter in between tracks about how they love London and want to live here and this is the best venue ever and the most up for it audience they have witnessed, no sirree. It was a case of let the music do the talking, just as the aforementioned Joy Division used to.

The atmosphere in the venue was one of people from around the world just getting together in a common cause to have a boogie. We were very near the front and around me were German’s and a Costa Rican who were most certainly out to have a great time. The many bars within the venue were accommodating the joyous punters, even though there was no IPA anywhere in the building as it’s not that kinda joint, but there were many spirits to be had! Therefore JD and Coke was order of the day as we weren’t driving. Everybody got on together, whether they be straight, gay, British, foreign and so on. If only life outside our TR/ST bubble was the same.

It was a memorable concert and many were queuing at the merch stall afterwards, which is always a great sign. We made our way out into the night which seemed a lot less cold than it had been prior to our entry to the club, probably because we had been dancing. The Embankment Tube beckoned, as did Victoria Station afterwards and much later our respective beds. “Time for bed said Dougal”. 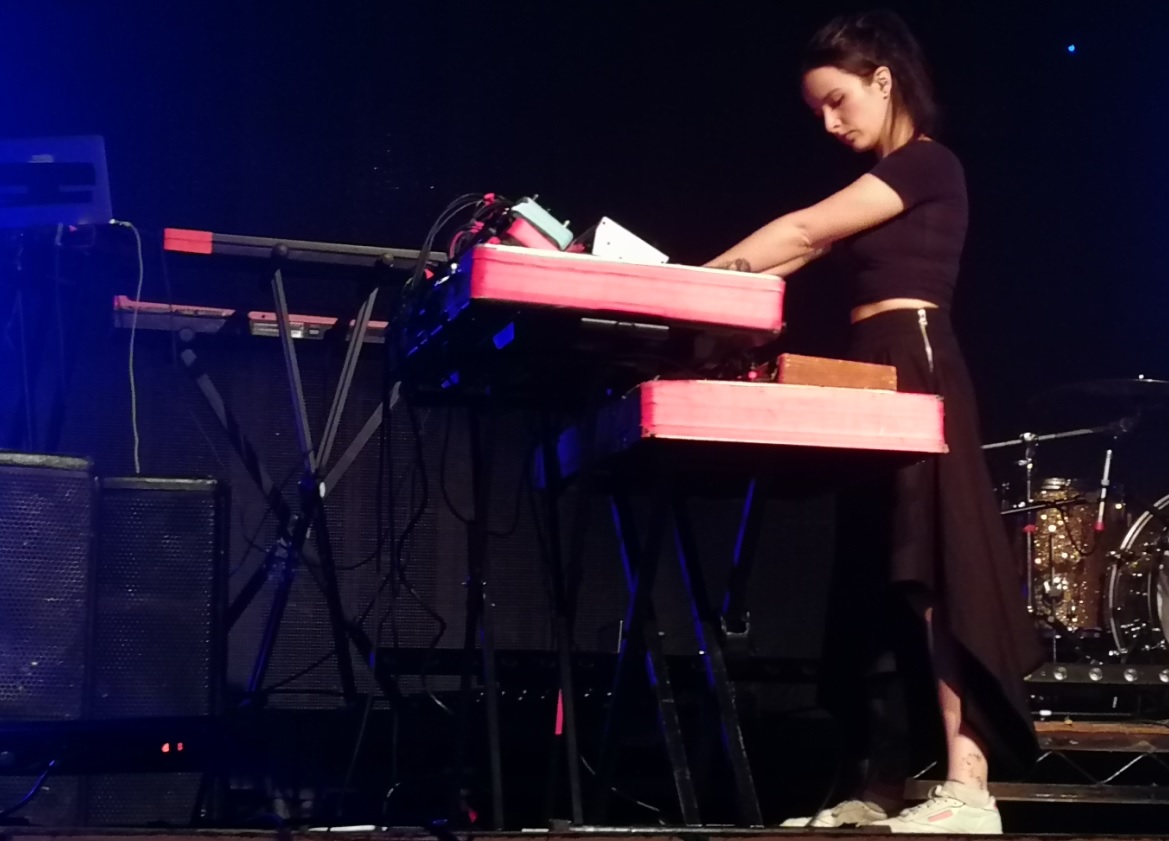 Support this evening came from solo artist Gabriela Jimeno who goes under the moniker of Ela Minus. She is based in Brooklyn, New York, but originally hails from Bogotá in Colombia.

Gabriela started in music at the tender age of 11 as a drummer in the hardcore band Ratón Pérez back in her home country. Then in 2010 at the age of 18 she left Colombia to study at the renowned Berklee College of Music in Boston and it was in the United States where she fully immersed herself in the world of synthesizers and electronic music, having picked up on the keyboards in Radiohead’s material.

She formed a band called Balancer with friends Francisco Valentin and Felipe Piedrahita and released material from 2012 to 2015. Check out their releases on Bandcamp. Then in 2016 Gabriela decided to go solo and Ela Minus was born.

Tonight this was our second helping of Ela Minus as we had witnessed her set very recently in Brighton, when she supported Georgia at Patterns. She has secured the support slot for all five TR/ST European dates – Brussels (Belgium), Bern (Switzerland), Paris (France), Amsterdam (Netherlands) and an opener here in the UK at Heaven.

The lights went down and Gabriela took to the stage. There were many more people present here in London than her recent Brighton concert and she went down rather well indeed, which must have pleased her somewhat. Although I must flag up that Heaven’s soundman wasn’t doing her any favours as it was quieter than Brighton and he was messing around with her levels two or three times during the performance. I’m pretty certain that this was the same set that we had recently seen in Brighton and the levels were perfect then, so it wasn’t Gabriela’s fault. Other than that, it was very good indeed.

Gabriela has a decent bit of kit and is always on the go, just like the quirkiness of Björk meets electronic performance I witnessed by Grimes at The Great Escape in Brighton in 2012. Her synth music ran as one continuous mix for all seven songs and as she sang along with her often off-beat vocals, she was in her own happy little world, bobbing her head from side to side as she moved across the stage and back again. Clearly she was feeling the vibe and enjoying her own music, which was a pleasure to see.

I for one would most certainly love to see her return to Brighton pretty sharpish! She has so far released 4 EP’s and there is an album due out next year, so I pray that a Brighton date is included. 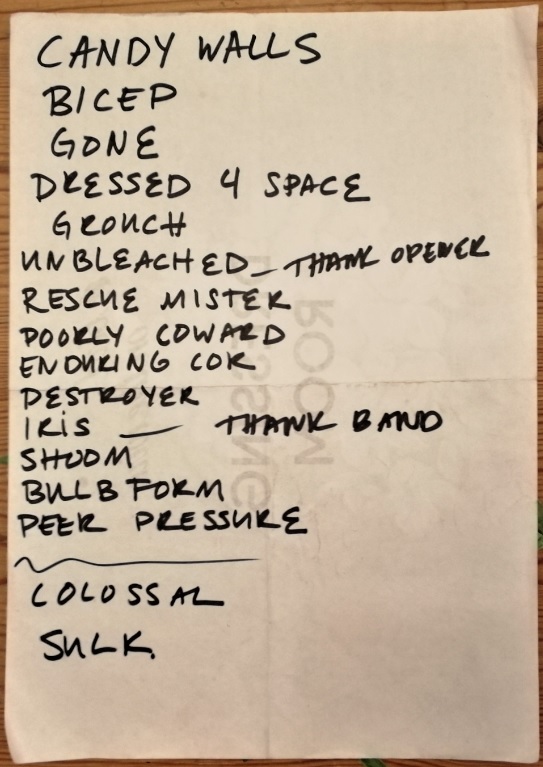 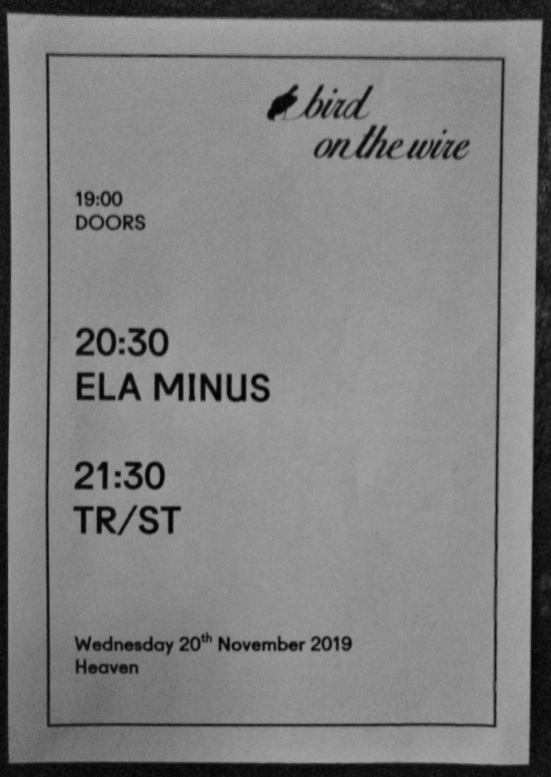 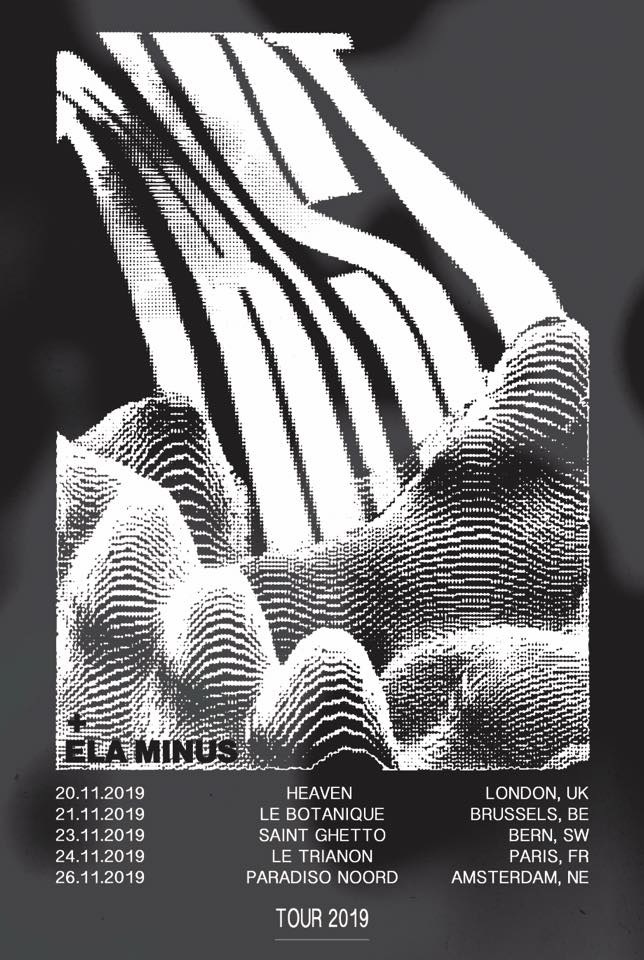