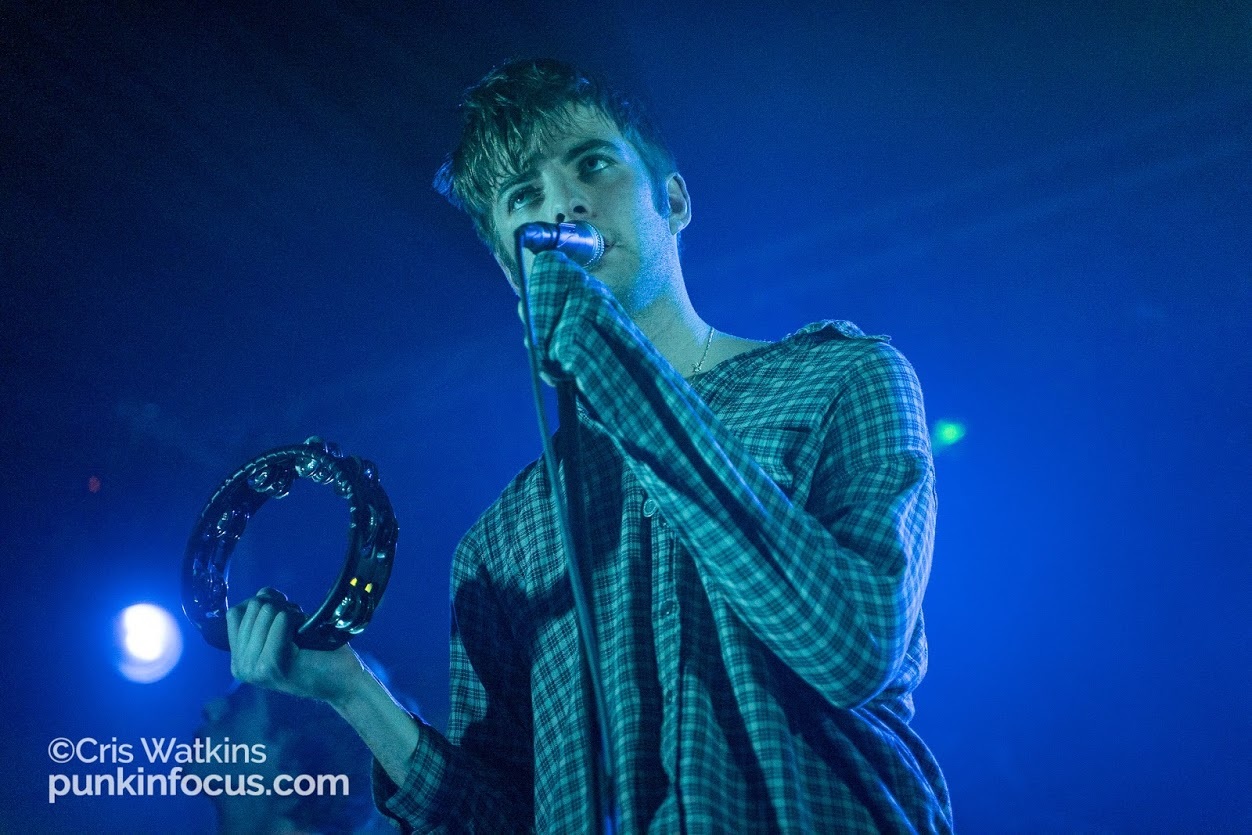 If you’re at all aware of guitar based music, and haven’t spent the last several months where there is no connection available, you may well have already come across Fontaines D.C. The Dublin five piece (the D.C. stands for Dublin City) has been busy charming the world this year. Their atmospheric post punk soundscapes have garage rock urgency, and come overlaid with achingly poetic lyrics, delivered with considerable swagger in an unmistakable Irish brogue by frontman Grian Chatten.

Just last year, they were playing tiny venues at The Great Escape Festival on the back of a series of self-released singles. Subsequent trips to Brighton were sell-outs at The Prince Albert, and then The Haunt. Tickets for tonight’s show sold out seven months ago. The debut album ‘Dogrel’, released to considerable acclaim on 12th April, has since been made ‘album of the year’ by BBC 6 Music and Rough Trade Records, and was shortlisted for the Hyundai Mercury Prize. The band has toured extensively, including dates in North America with IDLES, where they absolutely smashed a prime time TV appearance on ‘The Tonight Show starring Jimmy Fallon’. Festival slots in Australia and New Zealand are booked for early next year, and a February show at the 4,900 capacity O2 Academy Brixton has sold out already. Next time we see Fontaines D.C. in Brighton, it’ll doubtless be at The Dome or The Brighton Centre, so there’s a palpable buzz of anticipation as we head into the relatively intimate setting of Concorde 2. 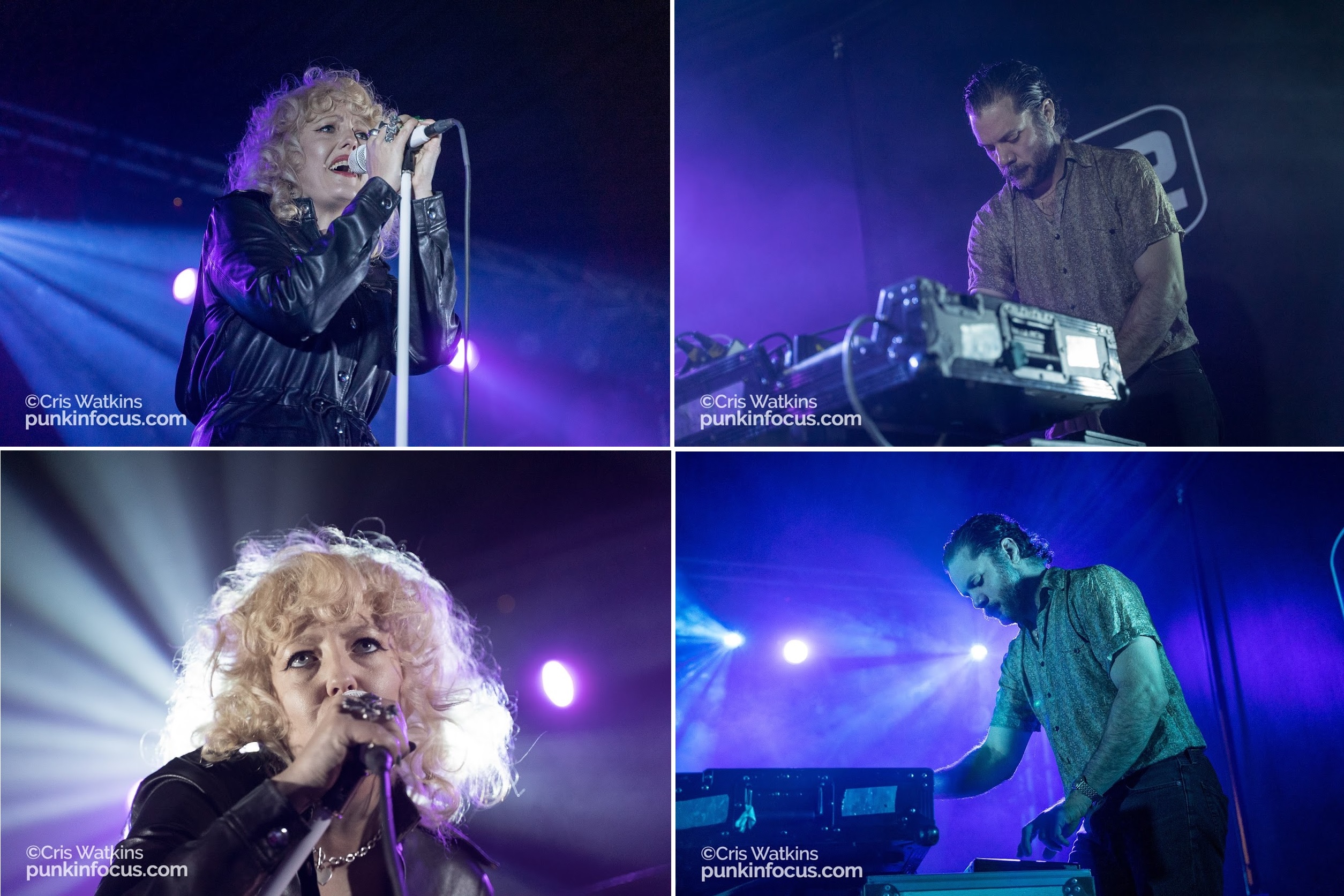 Support tonight is from Warm Drag, a keyboard and vocals duo from Los Angeles. Singer Vashti Windish has a shock of blonde curls and performs draped sensuously around her microphone stand, clad in a black leather jumpsuit with the band name written in studs across the back. This is handy, as you’d be hard pressed to find any mention of them on the event page or anywhere else. I’d clocked their eponymous album, on vinyl and retro-chic cassette, on a corner of the merch table, so appear like the all-seeing oracle when about three people around me ask if I know who the band are. House right is Paul Quattrone, with dark hair and stubble beard, side on to the audience, supplying all the backing electronically from a keyboard and a sequencer pad, through an onstage backline of Mackie PA speakers and subs. The duo format is reminiscent of Soft Cell, or Suicide, though in terms of their musical style, if you imagine early Goldfrapp you won’t be far off.

They are not an obvious choice of support act, but turn in an enjoyable set nonetheless. Opening number ‘The Wanderer’ has big synth washes over a sleazy sounding disco beat of dirty electronics, with the vocals drenched in a sea of reverb and delay. ‘Cave Crawl’ has an insistent riff that might be sampled guitar, over a lyric of “I want to crawl back in that cave.” There’s a more angular rhythm for ‘Hurricane Eyes’. Closing number ‘Crusin’ The Night’ is the standout for me, with the synth pumping out a punky sounding bass riff, as Vashti drawls a catchy vocal figure: “Cruisin’ the night, lookin’ for love.”

The long thin main room is filling up very quickly, and there’s a huge buzz of anticipation that tonight is going to be something special. Concorde 2, at capacity, is one big game of sardines, and it’s a relief when security open up the side door to let some air in. An impressive matching backline of Fender amps stands ready on stage, two combos for each guitarist, and a Bassman stack with a spare head, flanking a green drum kit, whose drooping arch Gretsch logo makes it look like it’s anticipating the considerable pounding it’s about to receive. A guitar tech is busily prepping a whole rack of instruments, suggesting there will be plenty of swapping and changing during the set. Finally, a rather unsubtle flashing torch signal from the stage alerts the sound desk to start the intro music, which tonight is ‘My Rifle, Pony And Me’, a sleepy western number sung by Dean Martin, from the film ‘Rio Bravo’. 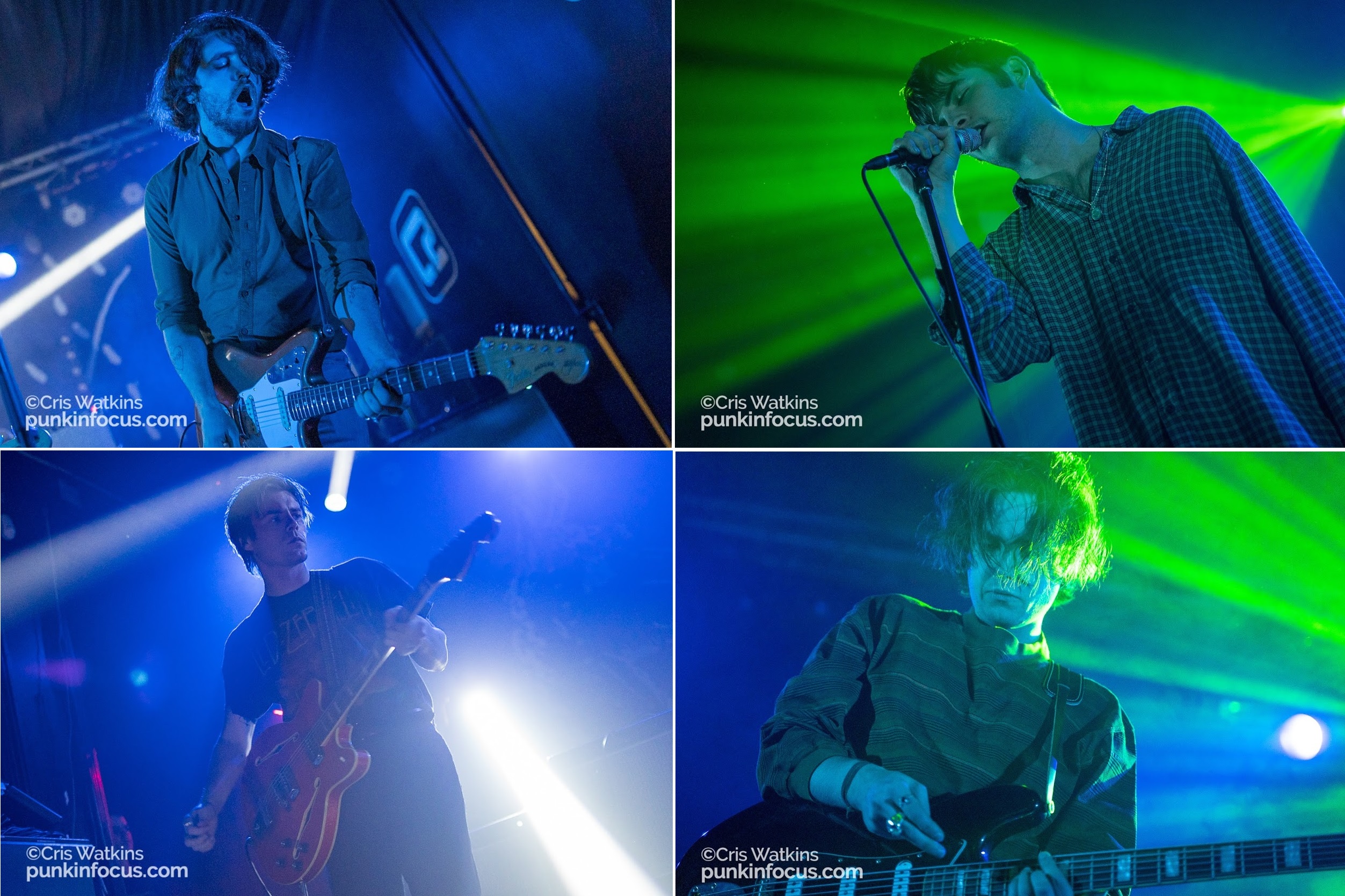 Fontaines D.C. take the stage to a huge cheer, and launch straight into the dark intensity of ‘Hurricane Laughter’. Grian Chatten prowls the stage in restless agitation, like a caged tiger amongst dancing shafts of bright white light. He wears a baggy shirt and an Ian Curtis haircut, and looks as cool as you like. He is flanked house left and centre by a guitarist and bassist who are both called Conor, so are generally referred to by their surnames. Curley wears a black T-shirt and starts the set playing a red semi acoustic. ‘Deego’ (Conor Deegan) has floppy dark hair and wrings an urgent bassline from a black Jazz. The Gretsch kit is indeed taking a mighty walloping from bearded drummer Tom Coll, and house right is Carlos O’Connell, with flowing long hair and a trimmed beard, throwing shapes with a red and white Jaguar style guitar.

There’s a sizeable knot of bouncing fans down at the front, and the dancing continues through the excellent ‘Chequeless Reckless’. Given how central the lyrics are to the band’s sound (often delivered semi-spoken, like poetry) I personally would have preferred the vocals slightly higher in the mix, although it hardly matters as the crowd knows all the words to the album tracks anyway, and there is much enthusiastic singing along. As predicted, the instrument tech is having a busy time, with changes of guitar or bass pretty much between every song. Fender Jaguars seem to be favourite, though I’m not standing close enough to spot exact models.

The third number is new, at least to me. For ‘Love Is The Main Thing’ the band are swathed in green light, and a tremolo guitar intro leads into a dreamy, drawled vocal over a busy echoing drum pattern and big stabs of delay effect rhythm guitar. For the more familiar ‘Sha Sha Sha’, vertical arrays burst dazzling white light at the audience, then adopt an orange chase pattern that looks like columns of flame. The audience are bouncing in ecstatic abandon.

‘Lucid Dream’ is another more recent addition to the repertoire, heralded by an insistent snare beat. Red light washes the stage, and there’s a slow, mesmeric guitar section before Grian slams his mic stand into the stage to launch a manic climax. After that we’re back into more familiar territory with ‘Television Screen’, its refrain delivered through a long vocal delay.

During ‘The Lotts’ I briefly find myself transported back to November 1979, watching Joy Division supporting The Buzzcocks. There’s a twanging intro on the G string of the bass, and atmospheric guitar arpeggios over a thumping wall of toms. The charismatic vocalist lurches around the stage, but I notice he’s singing in an Irish accent, and suddenly I’m back in the room, forty years older!

There’s a change of pace for the more reflective ‘Roy’s Tune’, which Grian sings standing in a cone of white light. There are a few hundred backing vocalists, as the audience repeats back the line “I hate the way they use her” in unison. ‘Too Real’ signals a return to full tilt mayhem, with the light columns flashing crazily as Carlos stands up on the speakers playing the slide guitar section with a beer bottle. The excitement continues with a large scale sing and dance along to ‘Liberty Belle’. ‘Boys In The Better Land’ is my favourite track from the album. The band launch the intro silhouetted against a backdrop of red light, with Grian cutting a cool figure holding up his tambourine. I’m too busy dancing to notice what happens after that.

Everything calms down briefly for ‘Dublin City Sky’, a very traditional sounding piece which highlights the influences of previous Irish bands like ‘The Dubliners’. If I had a pint of Guinness, I’d cry into it. “Thanks for coming,” says Grian, in his first and only foray into chatting to the audience. “We don’t do encores, so this is the last song.” I get the impression everyone around me appreciates the clarity of that position, and we all launch into reckless dancing for the triumphant finale of ‘Big’.

And that was that. What a gig! There are broad grins all around as we patiently file out into the dark drizzling November night. We were expecting something special, and we sure got it. 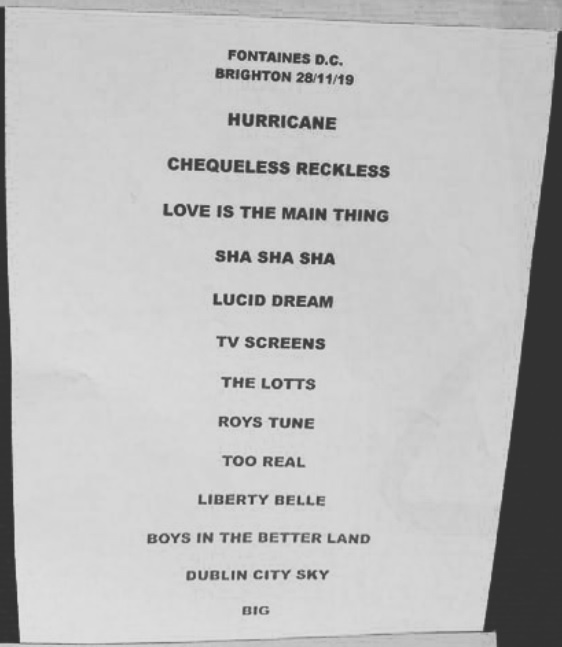 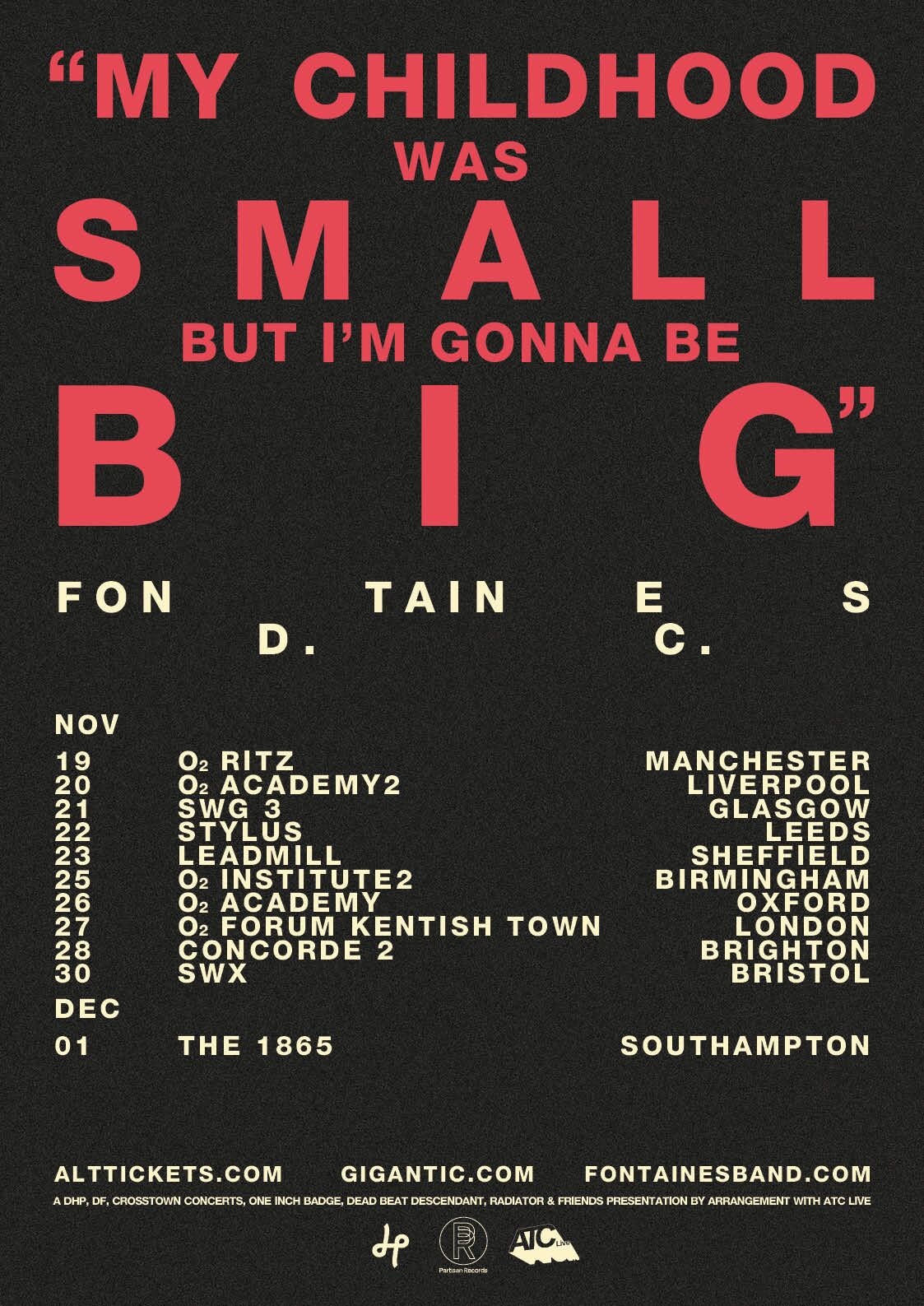